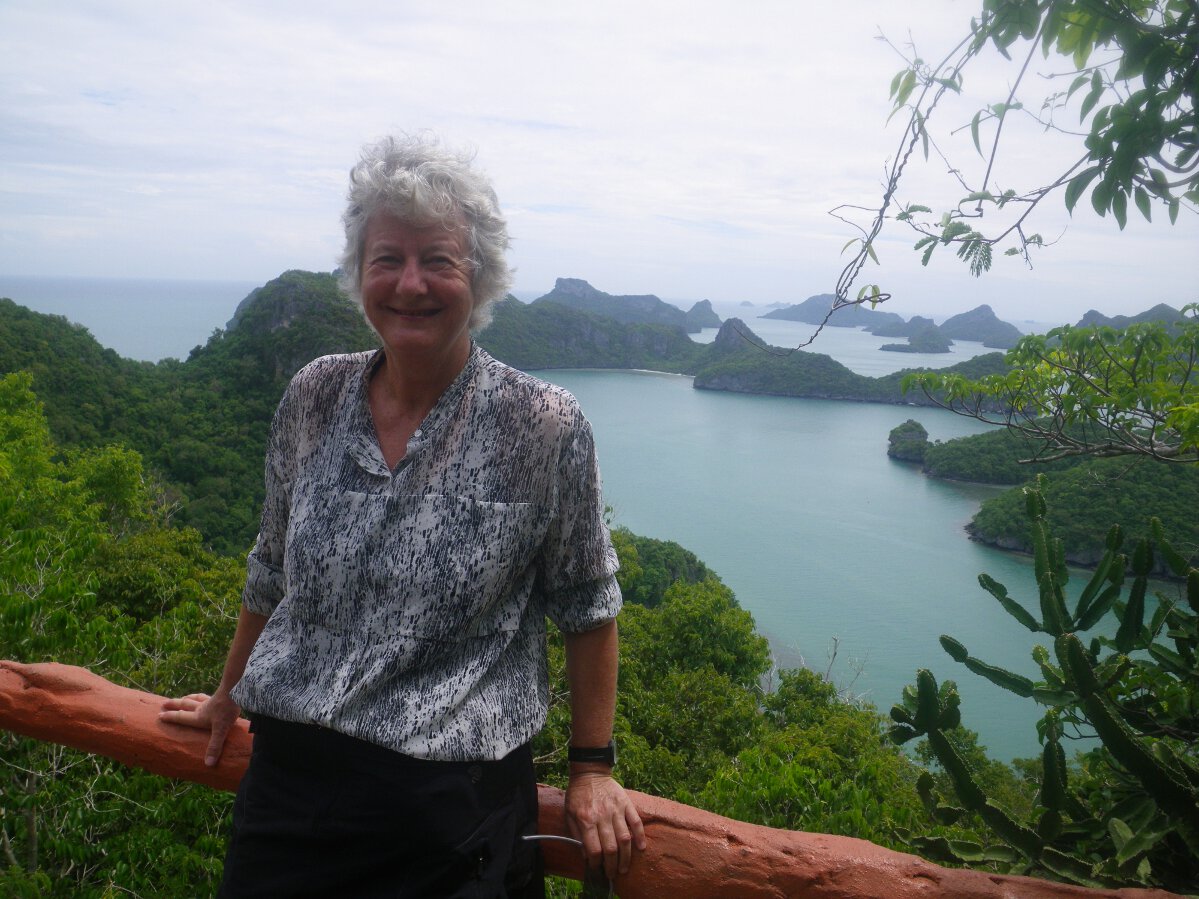 On Monday,  the van taking us to the ferry picked us up at 7.30AM, before the hotel restaurant opened. We assumed we would be able to buy food at the pier, but we were driven directly to the boat and herded straight on board along with about 60 other tourists.

Fortunately there was a breakfast of sorts provided, bananas,  a cupcake and (shudder) instant coffee. The trip out to Mu Ko Ang Thong National Park took about two hours, and was enjoyed by everyone except for a young Chinese boy who began chundering into a paper bag after the first few hundred metres.

As soon as we arrived at the first island those of us who were going kayaking were given a quick lesson and set adrift. The guide was a European woman about our age, and we were told that we had to stay behind her at all times, which meant pretty slow progress because she stopped every hundred metres or so to let the stragglers catch up. Knowing that any wildlife was likely to disappear as soon as humans turned up we stayed at the front, but we only saw a few sea-birds.

We were horrified to learn that all the coconut trees in southern Thailand are getting wiped out by long-horned beetle, which arrived eight years ago and is steadily munching its way across the peninsular. We could see the stumps of dead trees on almost every beach. I hope it doesn’t get to the Pacific islands because our alternative source of coconut cream is Samoa. Perhaps we better stock up!

After about 40 minutes we pulled up at a beach and the kayaking section of the tour was over. We climbed some incredibly steep steel stairs up to a viewpoint from where we could see a salt water lagoon in the centre of the island. It is connected to the sea so that fish can swim in and out, but scuba divers have not been able to fit through the narrow passage. The steep steps continued down to the edge of the water and made some interesting loops through the limestone on the way back up to the lookout.

Back on the boat we were served lunch in plastic trays. They have a very efficient system for feeding dozens of people in a short space of time. I noticed the Chinese family reloading their son with a greasy spring roll and cups of coke, and was glad we weren’t going to be making the return trip with them.

The final stop of the day was Ko Wua Talap, where we disembarked. In case it isn’t obvious by now,  “ko” means island in Thai. We planned to spend two nights, but discovered that we could only get a bungalow for the first night, so tonight will be in a tent.

We  took our bags to the room and headed to the beach for a snorkel. It wasn’t very exciting because the visibility was only a metre or so, and the coral is not wonderful in this area even when you can see it. On the plus side, the water is warm as, so we continued until we got tired rather than cold.

In the late afternoon, when it was slightly cooler, we climbed up a series of ropes to visit the Bua Bok cave. There are a couple of entrances in the side of the coastal cliff, and we climbed up to an opening at the top where the jungle started. It was sad to see dozens of broken stalactites littering the ground, and no obvious path which meant tourists have been climbing everywhere and damaging the limestone. There was also a trail of empty water bottles littering the trail all the way up.

As we were leaving the cave, a troop of dusky langur monkeys appeared in the trees just above us, and screeched at us in an attempt to appear menacing. Unfortunately they look far too cute for this to be plausible. Later that evening while we were sitting waiting for dinner about a dozen tuned up in a tree right beside the restaurant. There were several noisy disputes about the hierarchy and a couple were flung right out of the tree and on to the ground with a thump. The Thai rangers found this very amusing.

This morning we started with a quick swim while we waited for the staff to get started for the day. Along with our delicious breakfast of rice soup with pork we ordered some fried rice and fried noodles for a takeaway lunch. Disappointingly, this came in ubiquitous polystyrene containers despite the fact that signs in the park inform people that this material stays in the environment for ever.

Despite the education programme, all the beaches are littered with rubbish, mostly tossed overboard from passing boats. It is sad to see how much of it is plastic of various kinds. We bought our used containers home with us, but I wouldn’t be surprised to find they end up chucked behind a tree somewhere.

We had hired a kayak and so set off for a day’s paddling. We began by circumnavigating Ko Phi then crossed over to Ko Sam Sao where we would have had a beach all to ourselves if a German  couple in the next bungalow hadn’t had the same idea. We jumped in the water  for a long snorkel which was much more enjoyable than the previous day. Away from all the boats the visibility was almost two metres, and we saw several fish that were nearly eating size.

We continued up the coast until we came to a natural bridge in the rock just past another camping area. After passing under it we crossed a short straight to a small island that isn’t named on our map, but which had a shady spot under the trees through a small cave. After we ate our lunch we snoozed for a while before making the crossing to Ko Mae Ko near where we had been the previous day.

There is a small beach that we were told on the tour was famous because of dozens of bikini tops hanging in the trees. When we inspected them closely it was clear that they were all from the same Chinese manufacturer – probably excess stock from somewhere. Not exactly an example of spontaneous public artwork. The snorkelling at this beach was the best yet – I saw a giant clam, dozens of largish rainbow coloured parrot-fish and huge schools of smaller fish that you might see in an aquarium. There was a huge luxury yacht parked nearby,  and a row of deckchairs set up under umbrellas on the beach, but the clients were all sitting inside in air conditioned comfort, presumably getting plastered.

The last section of the trip home went very slowly at first, and we were struggling to make progress. I knew we were a bit tired, but the boat seemed to be incredibly sluggish. I wondered if we were battling against a strong tidal current,  but when we stopped under a rock overhang for a rest and a drink we didn’t seem to be drifting backwards. We rounded the corner and changed direction without improvement,  so it obviously wasn’t a head wind. Then I noticed our snorkelling bags had fallen off the back and were acting as a very effective sea anchor as we towed them! Having them back on board made a huge difference to our speed.

It is late afternoon now and almost dinner time. We are sitting on a wooden platform above the beach next to the café,  because the restaurant area is getting sprayed with some kind of toxic smoke to kill mosquitos. The operator has a device like a flame-thrower with a loud, roaring motor that emits huge clouds of smoke. The manager suggested we move away for an hour or so because it would be “bad for our lungs”. None of the Thais seem to be bothered about breathing it, and even the guy spraying it isn’t wearing a mask of any kind.

Next morning we woke up a bit stiff and sore. While our tent was very nice, the sleeping pad was rather minimal so we didn’t linger in bed. After a swim and breakfast we climbed 500M up a hill to a lookout on top of the island. It was very hot and sweaty clambering over the limestone rock clutching on to ropes, but the view at the top was spectacular. The first of the day-tripper boats arrived before we started down, so the trail was fairly crowded on the way back.

When we got back on our boat the guide announced that anyone who wanted could jump off the second deck into the water. In my enthusiasm I rushed to the third deck and leaped off the handrail which was very exciting, but I got told off and had to do subsequent jumps from lower level with the peasants. The ferry had free wifi, so I posted a photo to Facebook explaining that my blog posts will be delayed until we can get photos off Felicity’s camera.

One thought on “Ko Wua Talap”