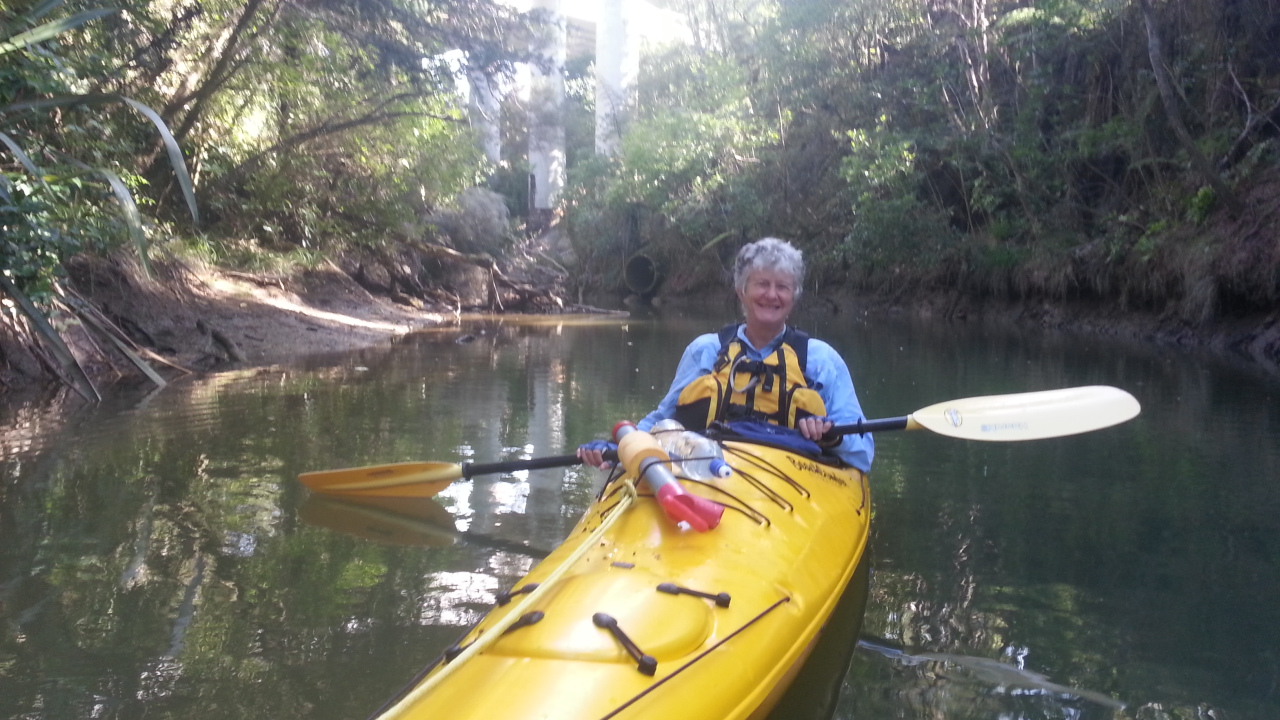 This morning seemed like a good kayak day so after breakfast we loaded up the vehicle and headed down to the Okura boat ramp.

Lots of other people had the same idea so there were already a couple of other cars launching various watercraft. The good thing about kayaks is that you don’t have to wait your turn, we just stopped long enough on the ramp to unload our stuff onto the grass then I drove back up the road and parked.

We first paddled up the northern arm, under the footbridge at the end of Haigs Access Rd and into Weiti Forest. Or to be more accurate, into where the forest used to be until they cut it down earlier this year. Last time we tried to get up this way we found our progress blocked by a log across the creek not far from the bridge, but today we were able to get quite a distance.

It used to be quite dark and gloomy when there were large pines on both banks, but now it is open and sunny. Eventually we were stopped by more strategically fallen logs, which seems unnecessary now that logging is finished in that area.

I was a bit surprised to hear large trees falling with a thump at regular intervals, but no sound of chainsaws. They must have been using some kind of mechanical harvester mounted on a vehicle. I wouldn’t have expected them to be working on a Sunday either.

We paddled back downstream, exploring all the small inlets as we went. I was impressed to see the Friends of Okura Bush (foob) volunteers have started setting bait stations along the banks, as well as along the track. We stopped just before the bridge to talk to a local couple who had just finished the walkway, and were curious to know how far we had been able to get.

The southern branch of the Okura winds its way up to the East Coast Road bridge, then under the motorway. The tide had turned by this time, and I felt a couple of logs near the surface as I paddled over and wondered if I would get back over on the way down. Eventually our way was blocked again, although we could see that if we had arrived just on high tide we might have made it further. Next time I must remember to bring the small handsaw that I carry in my bike backpack.

Not far downstream from the bridge is the Redvale landing, which we decided was a good place to disembark and eat lunch. The council has been mowing what used to be weeds and now there is a nice lawn to sit on in the sun. Unfortunately this ramp has a chain across at the top so it means a long way to carry our boats, otherwise we would probably launch here more of the time.

While we were eating, a fizz boat with four youngsters came zooming past. We thought it was going rather fast considering the depth of the water, and sure enough, when it got 100 metres further on we heard lots of revving and thrashing of water, and a few minutes later it came drifting back down with smoke pouring out of the engine. One of the guys pulled the cover off and it was clear that all was not well, judging by the continuing smoke. Not long after we set off again we found them tying the boat to a tree.

The wind had picked up while we were in the sheltered creek, so it was a bit of a slog back across the estuary to the Okura ramp. Just before we arrived we stopped to chat with Peter Townend, who was arriving home from his fortnightly task of mowing the lawn at Dacre Cottage. He runs the successful Canoe and Kayak franchise, among numerous other activities. He convinced us we need to come back for both a low-tide and a night-time paddle. So stay tuned.

One thought on “Okura River”