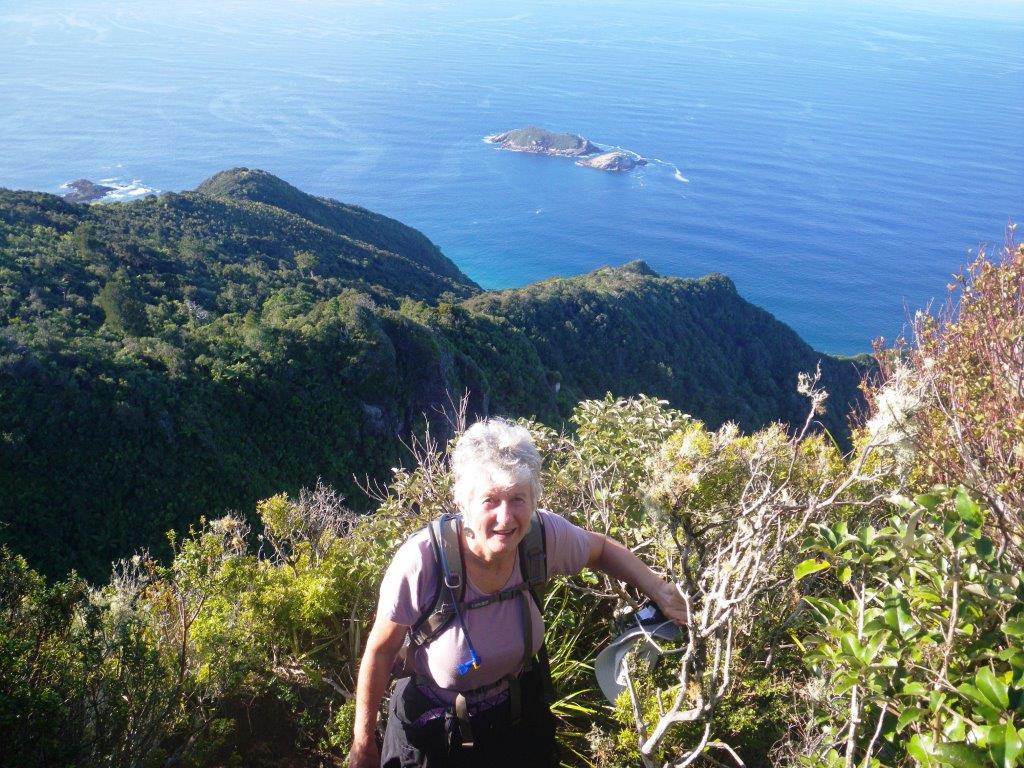 We’ve been up at Whangarei Heads today, checking out a campervan.

On the way through town, we stopped off to buy lunch at La Familia artisan cafe & deli, which is owned by our friends Mark and Agnes. Zoe Stonex sold us delicious rolls made with air-dried beef, plus a couple of sweet pastries.

After we had finished looking over the camper and taking it for a test drive, we drove out to Ocean Beach and put our boots on. It was early afternoon by this time, but we were determined to climb as high as we could up the hill as we could so we could enjoy the view while eating our rolls. It was pretty hot in the sun, so we needed to find some shade to sit in. A couple of hundred metres up we saw a patch of tea-tree which offered a perfect spot, apart from a few wasps which unfortunately seem to be everywhere at the moment.

The track continued steeply upwards, eventually reaching the bush. The council has put a lot of effort into building wooden steps which made progress relatively easy. We stopped at the site of one of NZ’s first radar stations, a military secret when it was first installed. All that is left now is some crumbling concrete structures and a rusty steel mounting that looks a bit like a periscope.

We kept climbing, following a ridge that got steeper and narrower. Near the top, a short side trail lead to a rocky outcrop with spectacular views up the coast towards Pataua in the north and across the harbour to Ruakaka ans Waipu to the south. A big bunch of teenagers were climbing further up the rock stack, and we followed them some of the way until Felicity started worrying about getting down again. There must  be good possum control in this area because we could see Rata flowers everywhere.

The ridge track turned to the west and continued towards Mt Lion. It passed lots more rock outcrops, sometimes along side walls and at one point though a gap between two huge boulders that joined above our heads. There was another spot where we were able to climb up a ladder of rata roots to enjoy a  view up the harbour towards Whangarei.

When we came to the intersection with the Peach Cove track we decided we had better start down before the daylight ended. We had  considered going down to the cove to see the hut, but it would have meant another steep climb back up to the ridge, so we’ll save it for another adventure. After more steps the path became easy and it wasn’t long before we were at the car park a couple of kilometres along the road from our car.