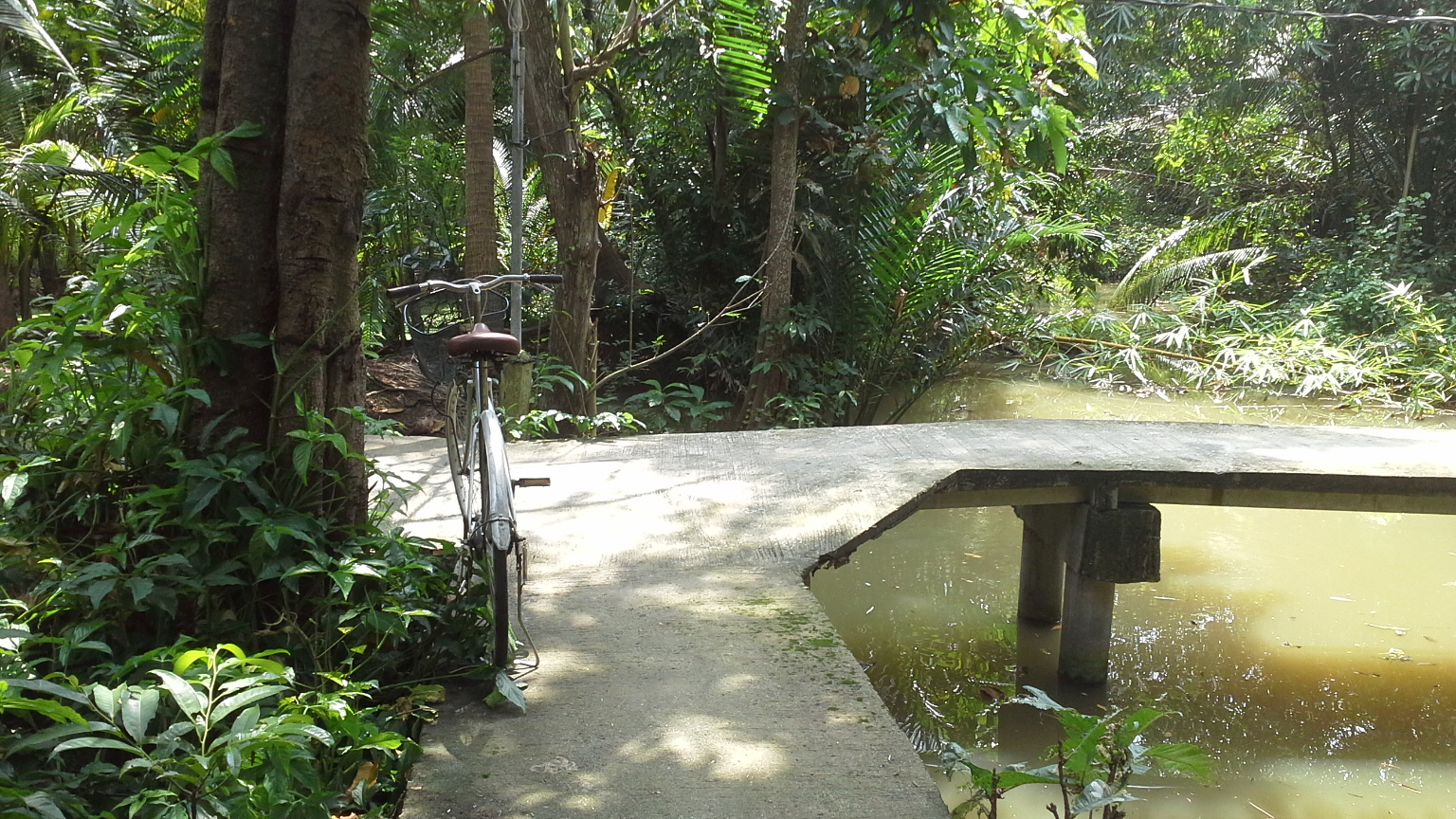 I arrived in Bangkok about midnight UK time, but since it was early morning here I just took my gear to the hotel, cleared my email then headed out to explore an area called Bang Nam Phueng. By bike!


I walked a long way down Lat Krabang Rd looking for the railway station, with a few detours down roads heading in the right direction that stopped at canals. At one stage a pack of dogs made me feel unwelcome, and I had to pick up a stone to make them back off.

When I located the elevated Airport Rail Link I was surprised by how few Thais were using it, as it is very cheap to use and well designed. There was a security metal scanner gate at the entrance, but there was only one operator,and as there were two other tourists with packs in front of me I just walked straight through with mine and ignored him, even though I set off the alarm.

It wasn’t very pleasant walking from Khlong Toei MRT subway station to the river, as Bangkok traffic is pretty crazy. It is actually possible to rent quite good bikes here, but I was very glad I decided to cross the river first and avoid the traffic, even though that meant I was riding a bit of a clunker. Orange lights are pretty much ignored, and in the big intersections some of the vehicles which start before the light quite turns green make it across before the half dozen red light jumpers. Nearly every phase you here the screeching of locked up tyres as collisions are narrowly avoided.

I spotted a small lane with snack shops on either side, and correctly figured it might go to the jetty I was looking for. The trip across the river costs 6 baht, but coming back it costs 10, since you don’t really have a choice. The last photo is my ferry driver rushing back for his next victims.

Bang Nam Phueng is pretty much an island formed by a big loop in the Chao Phraya river, and it has no highrise buildings. Most of it is, in fact, a mangrove swamp. The trails were mostly shady, and the jungle mostly very attractive. Every so often there would be a temple to remind me I was in Thailand. The mosquitos only made their presence felt when I stopped to take photos.

About 60% of my ride was off-road, much of it along raised concrete paths about a metre wide. I did explore some roads, but they had very little traffic, and most of it motor scooters. In the centre is a big park called Sri Nakhon Khuean Khan, which has sealed bike paths winding through the trees, and a kilometre or two of unsealed singletrack. There was even a bit of mud! I couldn’t believe my luck.

After almost three hours riding in the 38º heat with no sleep last night I was rather knackered, but feeling very pleased with myself. I walked back to the train after briefly considering putting my life in the hands of a motorbike taxi, but his price was so outrageous I couldn’t be bothered haggling.

When I arrived back at the Lat Krabang station I remembered to try the modern version of a tuk tuk, built on the back of a ute. They run up and down all the main roads and cost about 50c. There is a buzzer in the back, and when it stops going in the direction you want you push it and the driver pulls over. The only catch is that you need to know your way around.

I stopped for a bowl of noodles and a coffee, them came back to the hotel to shower and rest. I’m about to head out again to a night market to find some dinner.

One thought on “Prapradaeng bike ride”