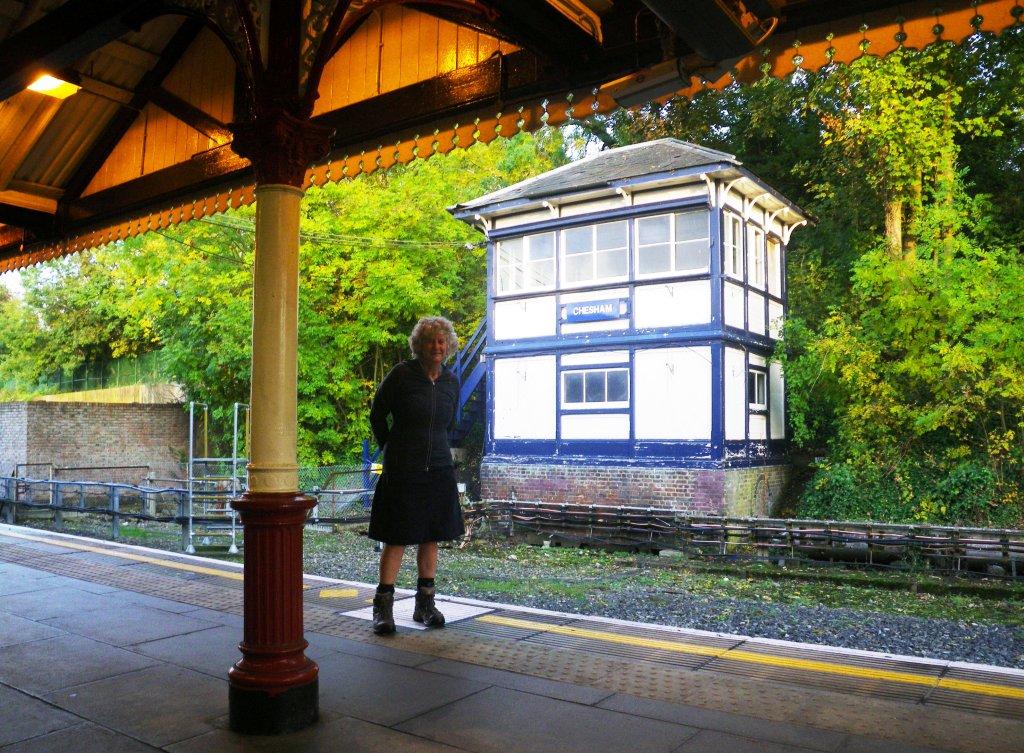 Today was our final opportunity for an English adventure, so we decided to return to Chesham, our favourite part of London.

The full title of the walk we chose is “Ashley Green Farms, Fighters and Forts”. We had to wait a while for a train going up the Chesham branch of the Metropolitan Line, but the last section of the journey was stunningly beautiful. The reds and gold leaves of the autumn trees contrasting with the emerald green of the grass are quite spectacular. Where the line passed through cuttings, I could see the underlying chalk on the banks.

The walk headed out of town through the cemetary, and the path was lined with Yew trees laden with ripe berries. I ate as many as I could while I had the chance. It started drizzling a bit, so we had to put our ponchos on. Fortunately it never got heavy like it did yesterday.

Opposite the Black Horse Inn, the route lead up a bridal path into some woods. It was lucky that we had detailed instructions, because there were alternative tracks branching off every few hundred metres. I think we could spend weeks exploring the Chesham area. There are also lots of great places to ride horses for people who do that sort of thing.

For quite a while the path led straight across a huge field planted with some kind of vegetable, I think turnips. The photo shows me walking around the edge, but we ended up having to trample right through the crop to reach a power pylon landmark. Apparently the farmers don’t mind.

After some more woods we passed through a paddock with some very friendly horses, which surrounded us as we got close and followed us right up to the gate. We continued mostly walking in farmland, sometimes with little groves of trees, but lots of fields which were often a bit muddy.

We reached the village of Ashley Green, and were delighted to find a restored, covered well house in the centre of the Green and Glebe Meadow,  which had dry seats where we could eat lunch. We passed about a dozen pubs on this walk which would make good alternative refreshment spots for people who like them.

Just outside of town we came to Bovingdon Airfield. It is closed now,  but in WW2 it was a busy American air base. Several famous film stars served here; Clark Gable, James Stewart and William Holden. It also hosted many famous visitors, such as Bob Hope, Eleanor Roosevelt and Glen Miller. Paul Tibbetts, the pilot of the Enola Gay which dropped the atomic bomb on Japan was also stationed here. For some reason there were lots of notices about staying off the concrete runway and keeping to the  marked track around the edge.

Through another farmyard and past some fields,  we came to Whelpley Hill Fort. It looks like Felicity is just standing in the middle of a grassy field, but she is actually on a low bank of what used to be an iron-age enclosure covering four and a half acres. The bank and ditch are gradually disappearing as the field gets plowed. We found a recently filled in ditch where someone has been doing some archaeology. I thought for a moment that I had discovered an iron age bone, but it was just a rock.

There were lots more fields to cross, and several ancient pubs to pass. The sun came out for a while and the late afternoon became quite pleasant. On the way back into town, we passed some well tended allotments,  some with large orange pumpkins ready to harvest.

Felicity’s mum used to come to Chesham for holidays over 80 years ago, we are wondering if she will recognise the signal box at the station. There are old photos of the opening day that show crowds of people on a grassy bank where all the trees are now.