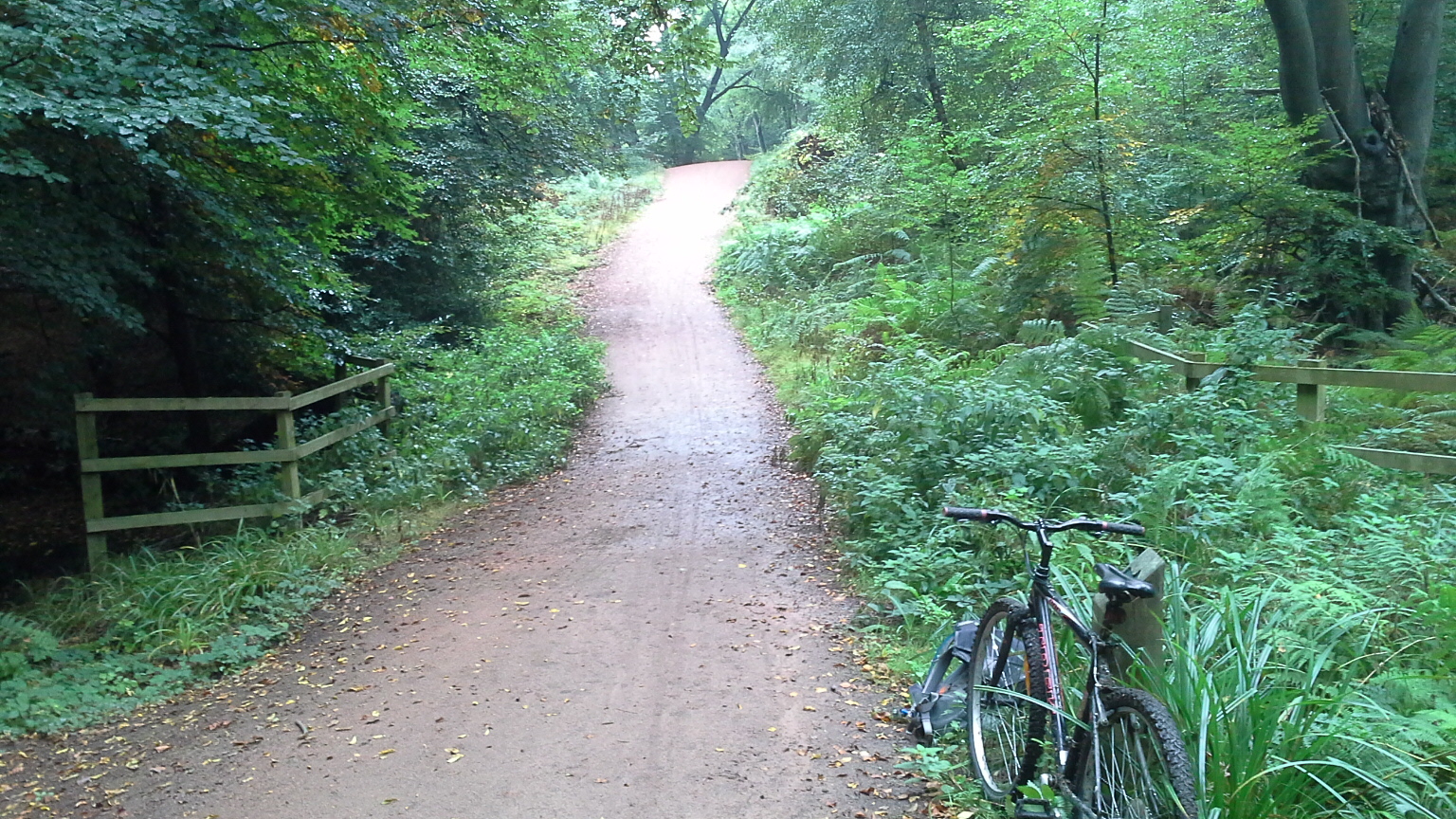 I woke to hear rain last night, so I wondered if I was making a wise decision to go bike riding in Epping Forest again today. But the forecast claimed the rain had passed, and I figured the likelihood of muddy conditions isn’t going to diminish in the next few weeks, so I decided to seize the opportunity.


The four train journey went smoothly,  so almost exactly an hour after leaving home I was riding up High Beech Rd from Loughton. I decided not to start any further north because I now know the best single-track is in the High Beech area. The trail wasn’t as muddy as I feared, and although the bush was a bit damp from the rain I soon got hot climbing up the hill and put my coat in my bag.

After a while I reached the top and started enjoying a few undulations, then a bit of downhill. I was thinking it was about time for a location check when I spotted what looked like gravestones through the trees. I left the trail briefly to get my GPS out in the open, and discovered the pretty High Beech Church, which is all alone deep in the forest.

I zigzagged back and forwards across the ridge while heading in a generally northerly direction, and eventually popped out of the trees at the King’s Oak pub, where I purchased one of their cafe’s “famous salt beef sandwiches” for lunch. I then followed some more trails north, until I recognised the Wake Valley Pond, and decided to turn south again. This involved a very fast ride for a kilometre or so down the road till I saw a trail to the east, heading to an area called Little Monk Wood which I wanted to explore.

I followed some green arrows on poles, and they lead me to Laughton Camp, the second ancient earthwork built in the forest around 500 BC. In those days the Scots were too far away, so English tribes had to fight wars with each other. The two forts in Epping are on the boundary between Trinovantes and Catevelauni territory. In the 18th century, the dreaded highwayman Dick Turpin was rumoured to have a cave hideout at Laughton Camp, and as a result travelling through the forest was fraught with danger.

To be honest, if it wasn’t for the sign I would have thought it was just a neat bank to ride my bike across, but I respected the “no cycling” request and walked up to have a look around. I was half hoping I might stumble across an undiscovered iron age artefact, but all I found was a few aluminium age beer containers.

By now I was thinking of heading for home, but when I came across a metaled path leading enticingly southwards I couldn’t resist following it. It lead to the top of Warren Hill, with an equally irresistible downhill on the other side leading even further south. I finally shot out of the bush at a busy intersection in what turned out to be Buckhurst Hill, which for some reason was swarming with police stopping traffic. It was immediately obvious they weren’t interested in mountain bikers, so I checked my map and discovered that I was much closer to the tube station at Buckhurst than my intended destination of Laughton.

Once again I neglected to get off at Leytonstone as I should have, and instead continued to Stratford and the direct train home. I could probably get away with it going north, but if I got stopped trying to get on the Central line train it would be a long ride to the next station. Today has probably been my last ride at Epping, as I won’t have many more opportunities and there are lots of other places I want to explore.

One thought on “Loughton to Buckhurst Hill via Epping Forest”