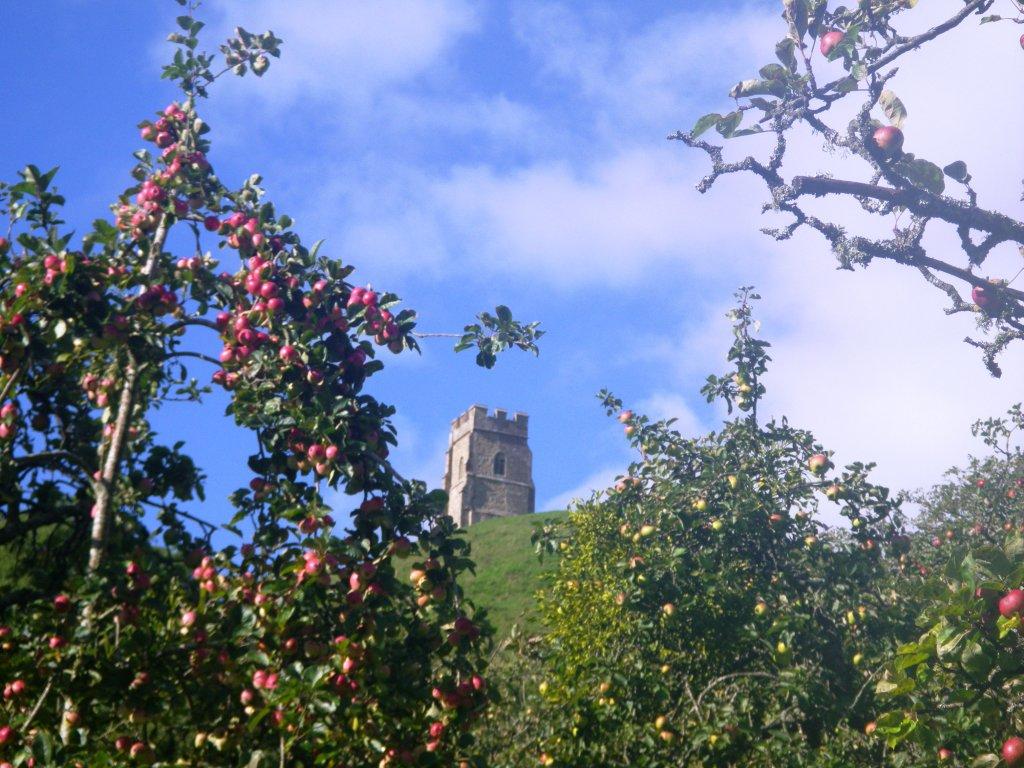 We discovered this is a very spiritual town when Felicity booked our accommodation. Nearly every B&B seems to be situated on a ley line, offers massage, healing, or 100% organic, vegetarian breakfasts.

We had to settle for a 10 minute walk out of town to find one that is vibration-free and serves bacon and eggs. We arrived on the bus at 10 PM last night, and felt like we were in a larger version of Golden Bay or Coromandal. There are dozens of shops selling crystals, religious books, beads, quack remedies, and hippy clothes, alongside vegetarian restaurants and meditation centres. The town itself is very attractive, with lots of old buildings and a huge ruined abbey that we plan to visit tomorrow.

After eating a traditional non-vegetarian English breakfast, we headed off to see the Tor, which is the main attraction of the town. When we first saw it I was a bit disappointed, because my fantasy had been that it was a neolithic monument similar to Stonehenge. What you see now is the remains of a Christian church, not even a 1000 years old. Apparently it was a sacred place for druids once upon a time,  but not much trace of this remains.

The sun was shining brightly and the sky was blue, so I soon began to enjoy walking up the hill, which is a bit smaller than Mt Eden. A notice at the bottom told us that volunteers have replanted several ancient apple orchards around the base, so we hunted around until we found one. There were about half a dozen varieties that I have never tried before, available in huge quantities. Here in Somerset they are traditionally used for cider, but these seem destined to rot on the ground unless eaten by the occasional tourist like us.

There are a couple of concrete paths leading to the top because it is visited by hundreds of people a day, and they are concerned about erosion. There were fantastic views from the summit, but it was very windy. We sheltered for a while beside the tower and listened to a man lecturing a university field trip. The plains below (known localy as “levels”), have mostly been a swamp, but major engineering works in the 19th and early 20th century crated drains and canals to created fertile farmland. At one time the Tor was an island. It is supposedly home to the king of the fairies, but there was no sign of him today.

Down at the bottom of the hill, we came to a couple of sacred wells. One of them is known as the Chalice Well, because the Holy Grail is supposedly at the bottom of it (yeah, right). You have to pay £4 to go in and see it, plus another £1 for a bottle to take some of the holy water home as a souvenir.  We decided not to pay, but when we walked around the road behind we discovered a small outlet through the wall for cheapskates, so I gulped a couple of handfuls. I sure feel blessed now!

There are small lanes called “droves” running in all directions across the countryside, so we hiked up and down a few until we found a pair of ancient oak trees called Gog and Magog. These are the last survivors of an avenue of oaks that used to mark a processional route for druids heading for the Tor. Obviously they mark an important ley line. Sadly, Gog seems to have expired a few years ago, and Magog doesn’t look very healthy either. People have tied ribbons and little notes to the branches, but I don’t think they are helping.

After several more droves and a stop for lunch we had pretty much circumnavigated the Tor, so we decided to explore the levels. The map showed what looked like an interesting path across a moor, which necessitated a mile or so walking along a busy, narrow highway which wasn’t much fun. I was glad that the wind had cooled us off enough so that I was wearing my rescue orange jacket.

The drove turned out to be a very boring farm track beside a cow paddock,  so we turned around after a few hundred metres. Back up the highway we had spotted a path running alongside the Brue river, which is interesting because it is now higher than the surrounding countryside. We checked with a fisherman that we would find a road at the other end and he answered us in a thick Somerset accent.

We didn’t take his advice to “keep straight on when the river reaches the ‘ole”, so we had to climb up a stone wall to get up on to the highway, which must have originally been built by the Romans, because it is called Roman Road. Fortunately there was a footpath this time.

However we didn’t stay on the road long, because another walkway led off to go over Wearyall Hill. At the top we saw a couple of wild rabbits that were surprisingly unafraid of us, and didn’t move until we went closer than a metre.

On the way down the hill we discovered a tree stump covered in ribbons and messages. This turned out to be one of the famous Glastonbury thorn trees, which apparently grew when Joseph of Arimathea visited with the Holy Grail and thrust his staff into the ground. The original thorn was burned during the English Civil War, but people plant cuttings and it grows back. The one we saw was seriously vandalised back in 2010, and looks unlikely to survive in my non-expert opinion.