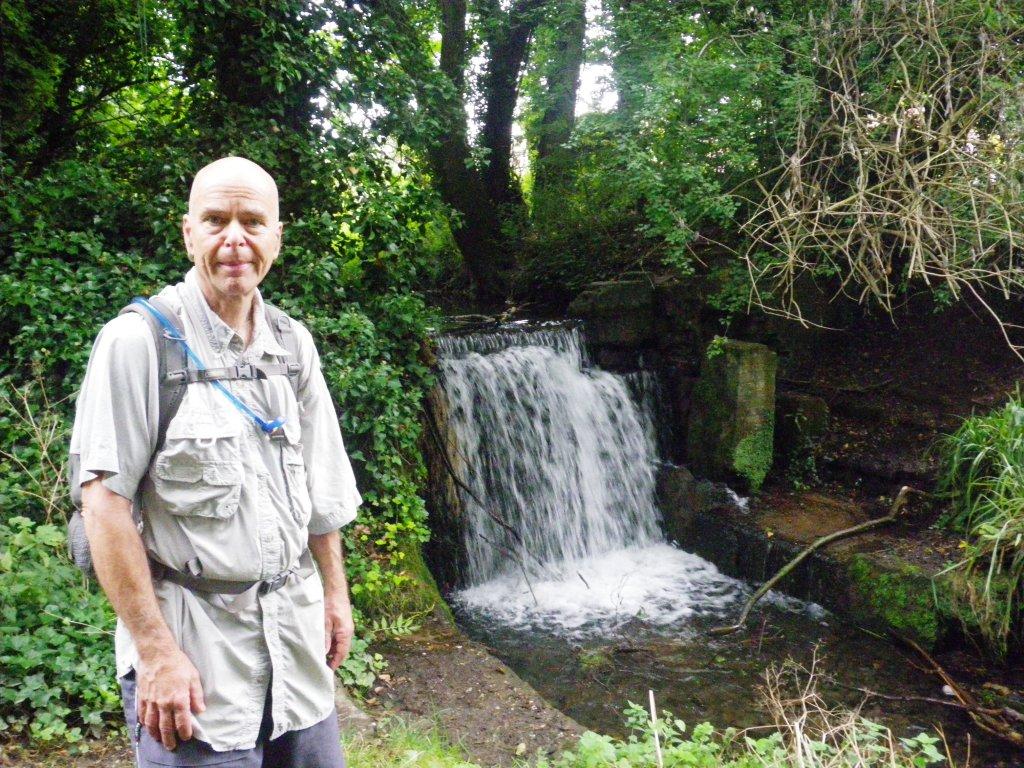 
We took the Metropolitan Line out to Rickmansworth, with a plan to walk along tne Coln river, but as we left the station we spotted a sign advertising the Chess track and immediately changed our plans. It didn’t take long to leave the town behind and get into the countryside.

At first the path was quite narrow, in between the high fences of big flash houses. I’m still impressed that so many boundaries have public access between them. The route was pretty well signposted, but every now and then we came across other trails leading off and we had to pull out the GPS.

The river is very clean because it originates mostly from springs in chalk around Chesham, our destination. After about an hour, I noticed that the ploughed fields had terraces, which I assumed were modern. A noticeboard informed us that they are called lynchetts, and are thought to have originated in the 9th century. In those days southern England was a lot warmer, and it is believed they were used for growing grapes.

A bit further along we came to Sarratt Bottom, where there is heaps of watercress growing. This is apparently one of the oldest cultivated green vegetables. There is still a commercial farm operating,  but Felicity waited and harvested a bunch for free.

We ate our lunch at Frogmore meadows,  which is a sanctuary for water voles, but sadly we didn’t see any. On the side of a hill I saw William Liberty’s tomb beside the trail. He asked to be burried far from anyone else because he was worried he would not be able to identify his own bones when he got resurrected.

Just below the tomb is the site of the old village of Flaunden that was abandoned when the church shifted to a neighbouring village  a couple of hundred years ago because of flooding. As late as 1960 you could see the old walls of the church, but now it is just a mound, which I could see no trace of through the undergrowth.

The village of Latimer is very pretty, with 17th and 18th century houses surrounding a triangular green. An impressive tomb turned out to be for a horse that was injured/killed in the Boer war, I couldn’t tell if the actual body is buried there.

Just beyond the village is the imposing Latimer House, which is now a flash hotel. During most of 20th century it was the Joint Service Defence College, and captured German U-boat submarine crews and Luftwaffe pilots were interrogated there. Rudolf Hess also stayed there after he flew to Scotland in 1941.

Down if front of the house a weir in the river has made a small lake. Every hundred metres or so is a small wooden jetty for anglers to fish for trout. Many of them were being used today, but we were too far away to see if anyone was successful. The Romans were known to have a farm in this fertile area.

As we neared Chesham, we passed several sites where there used to be mills. Most of the current course of the river is, in fact along old mill races. The earliest mill on the Chess was recorded in the Domesday Book almost a thousand years ago.

Chesham is another attractive town, with almost no modern buildings in the central area. The main street is closed to traffic, so it has quite a historic atmosphere. The local butcher managed to convince us to buy a couple of duck’s breasts stuffed with pine-nuts and marinated in cranberry and clementines, which we’ve just enjoyed for dinner.