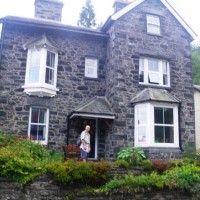 Tonight we’re in Snowdonia, Wales for a week of hiking. The village we are staying in is very pretty; the Conway river rushes through town just across the road from our hotel, which like most of the buildings is built from the local slate.


The train trip from Euston was much more enjoyable than travelling by bus on the motorway, because you can see the surrounding countryside. We passed several ruined castles on the top of hills, and criss-crossed the Grand Union Canal repeatedly. When we first reached the Welsh coast, I was horrified to see literally thousands of trailer homes which people presumably use for holidays, even though the shore is rocky and more mudflat than sand. I guess swimming isn’t really high on the agenda.

We discovered that the room we booked is on the very top floor of a small B&B, and as soon as we had dumped our gear we set of for a walk up into the hills through the Gwydyr forest. When I saw a tumble-down stone building covered in foliage, I left the track to check it out closely, but immediately encountered the delights of stinging nettle, which I didn’t recognise. Fortunately I had a doctor with me, who quickly found a herbal remedy (dock leaves), which reduced the painful stinging on my bare calves and hand to an irritating itch.

A bit up the track I was able to console myself with a feed of sweet wild blue berries which seem to be all over the forest. The path lead to an attractive lake, and Felicity had nearly convinced me to go for a swim when we saw a sign telling us it is the local water supply and that swimming is forbidden. The track continued all the way around the lake, and we stopped to pick blackberries and to admire the local wildlife. OK, the mole was not exactly alive, but you seldom get a chance to see them so Felicity took the photo anyway.

There are stone walls and buildings everywhere.  The stone railway bridge behind Felicity is the work of a master craftsman, even though it is in the middle of nowhere.

A century ago this valley was home to hundreds of miners and quarry workers, extracting slate, lead, copper and zinc. Many of them had small farms to supplement their income. It is a very pleasant environment now, in the middle of summer, but it must be pretty cold and damp in the winter when there is only a few hours of sun. I’m looking forward to exploring further afield over the next few days.

One thought on “Betws Y Coed”