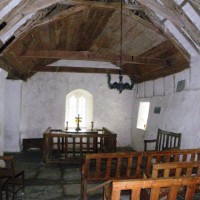 When our host at the Bryn Llewelyn guest house Mick Figg heard that we were keen hikers, he gave us a photocopied map with a suggested route that would take us on a five lake circuit. There are lots of shorter walks around the village, but we are obviously more hard core than your average tourist.

After eating our “full English breakfast”, which seems to be exactly the same wherever you go, and buying some bread for lunch, it was 10 o’clock by the time we crossed the Pont y-Pair (bridge) and set off up the hill. It wasn’t long before we came to the first of the many old mine shafts we were to see throughout the day. The ones that aren’t securely fenced off have strong metal grills across the openings, so I guess they are pretty dangerous.

We had stopped to check the  map when I noticed a tiny frog hopping across the road. It was hard to convince it to stay still enough for a photo,  but Felicity eventually managed. There is a cool looking mountain bike trail in the area we were walking, and I felt a small pang of envy every time a rider shot across the road in front of us. However the lakes we passed were very pretty, so I was still enjoying myself.

Just before midday we reached the old Hafna mine site where there used to be a smelter. I guess they were mostly mining lead, because the chimney was quite a distance away due to of toxic fumes. When the mine closed it had a huge steam engine to drive the bellows, but originally they were operated by water flowing from a dam up in the hills behind. We set off up the hill to see, but got distracted for ten minutes or so by a bank covered with ripe blueberries. When we reached the top our fingers and lips were stained purple!

Although it seemed like quite a remote area, there was once quite a big population living and working around the mines. This meant that there was quite likely to be a parallel path just 50 metres away, and several times we thought we were lost when we saw other walkers through the trees. The dam was quite impressive, all built of stone of course, and stretching for hundreds of metres around a hillside.

We reached Llyn (lake) Geirionydd in the early afternoon and followed a couple of local guides and their American clients down to the lake shore. The guide told us that “just ten minutes” up the road we could see Llanrhychwyn, the oldest church in Wales, which dates from the 11th century. There was a church on the site in 600AD, when Christianity had died out in England (the dark ages). It took more like 20 minutes each way, even at our relarively fast pace, but it was well worth the detour. The church today is in the corner of a farmer’s paddock, and the back wall had tractors and farm implements parked beside it. But when we walked through the stone gate it was like travelling centuries into the past. The church was unlocked, so I opened the door with some effort due to the fact that the wall is not straight up and down. The windows in the photo had what looked like stained glass but we read that it had been coloured after it was made, and is the oldest known glass in Wales.

We headed back the way we had come, and rejoined the route on Mick’s map. We followed a gravel road up over the saddle and back down into the Conway valley. Before we hit the busy highway, we turned to the west, and eventually found our way down to the banks of the Afon Llugwy, which is the pretty river that runs back towards Betws-y-Coed and our guest house.

It was 6pm by the time we arrived home, so apart from a couple of brief stops for lunch and blueberries, we have walked for eight hours. We’ve just returned from the local pub where we were served sea-bass and a huge pile of vegetables which looked like enough to feed a family of four. There was just half a potato left over!

One thought on “Llanrhychwyn Church”