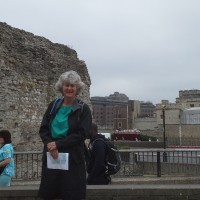 Being from New Zealand, where “old” means 100 years or so, it’s exciting to be in a city that dates back to before Christ. Today we decided to check out Roman ruins in the old city area.


We started near the tower of London, following a walking tour that I found on the net. The tour included many interesting non-Roman places along the way.

At St Olave’s church, we only expected to see the skulls over the gate, but when we poked our nose inside the church the very friendly Verger told us that it was St Olave’s day, and showed us around. He even took us down some narrow stairs to the crypt underneath the building, where most tourists don’t go. As we were leaving, we saw a small door with a spiral staircase leading up into the tower, so we climbed up and up until we emerged into a room with five people preparing to toll the bells. I thought they might be  angry with us, but they were also very friendly, and invited us to climb even higher to see the bells.

The next stop was the beautiful Leadenhall Market, which was used in the Harry Potter film as the location for Diagon Alley. In the centre of the market, we discovered that another film was being made, so we kept very quiet while I surreptitiously took a photo. The copper coloured statue (played by Tom Bell) then turned around and asked if we wanted to be extras, so we were directed to stand behind him pretending to look at my tablet. The film is called “Passing By” directed by Palle Nodeland.

Our next major stop was the City of London Guildhall. It seems to be the equivalent of a Chamber of Commerce, although only some trades seem to be represented. The twelve Great Livery Companies have banners hanging down both sides of the Great Hall: Mercers, Grocers, Drapers, Fishmongers, Goldsmiths, Skinners, Merchant Taylors, Haberdashers, Salters, Ironmongers, Vinters, and Clothworkers. The photo shows the statues of Gog and Magog, who are the giant guardians of London. We asked a security guard if we could see the crypt beneath, and he obligingly took us down.

Across the square from the Great Hall is an art gallery, with some interesting paintings of historic London. But what we had really come to see was down in the basement; remnants of the Roman Amphitheatre which were discovered quite recently during excavations. It must be quite a problem for developers in this area, because historic artefacts are found all over the place.

We visited about a dozen small churchyards and wandered down lanes and alleys looking at fascinating buildings, including one of the city’s first coffee houses. We followed several sections of the Roman wall, but by mid-afternoon we were both getting rather tired, so we’ll have to complete this mission another day.