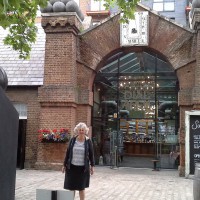 Now I know why there is a football team known as the Gunners. The Woolwich Arsenal is where many of the British Empire’s weapons were manufactured, and what started as a factory football team is now one of the English premier league clubs.

We visited this area just downstream from Greenwich because there is another foot tunnel under the Thames. When we got off the train, we discovered an attractive market which diverted us for a few minutes until we discovered the huge ex-military complex.

A very loud sergeant-major type of guy was drilling a group of small boys in uniforms while their proud parents watched. As we were leaving, one young girl rushed to join the troop.

A display in one of the buildings taught us a bit of the area’s history. A few hundred years ago, it would have been quite far from the city, which was smart considering the danger of nasty accidents. Some of the worst jobs were done by prisoners who lived in old decommissioned ship hulls moored in the river nearby.

We found the tunnel entrance and descended the spiral staircase. There were a few more minor leaks than the Greenwich tunnel, and I saw that under some of the drips there were small stalagmites beginning to form, due to the high calcium content of the Thames water. I had already noticed in the shower that the water is pretty hard, because soap doesn’t lather very well.

While we were eating our lunch in a nearby park, I spotted a grey squirrel, which isn’t native, but still exciting for visitors from NZ. Apparently they are considered a pest because they are displacing the native brown squirrel.

We then took a trip on a free ferry back to Woolwich, where we got off and immediately boarded again for the return trip. We would have stayed on, but a very insistent announcement told us that “all passengers must disembark”.

The silver Thames flood barrier was visible just downstream, so we had a rather long walk around a construction site where a new rail tunnel is being built. The barrier is an amazing piece of engineering; I would love to have seen it closing.

One thought on “Woolwich Arsenal”