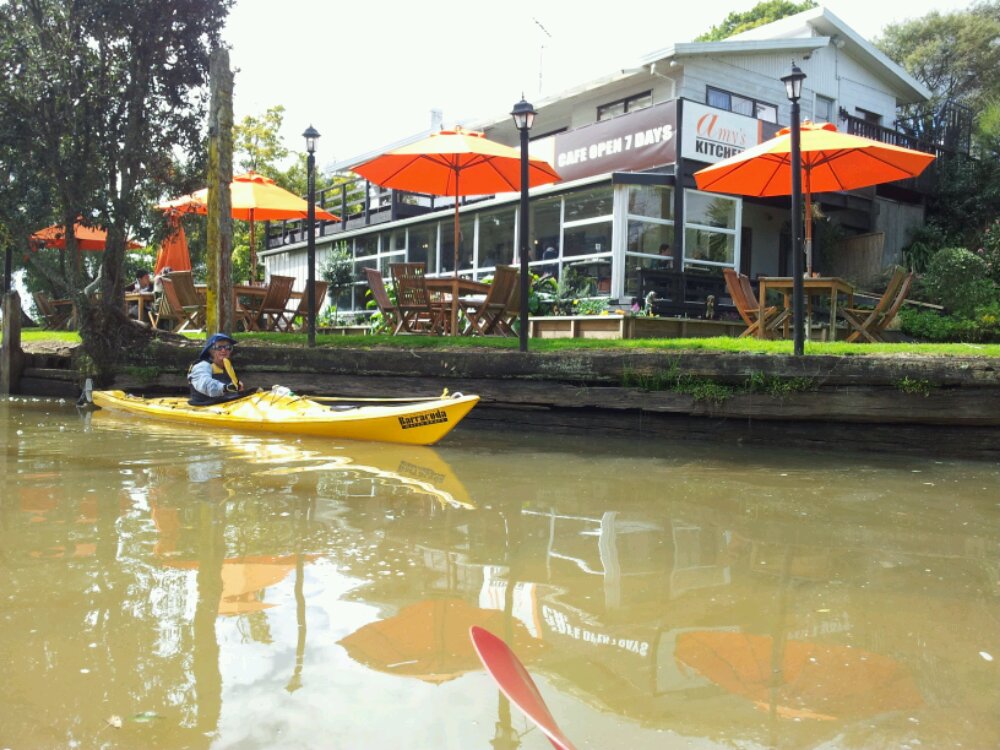 The tide was full about 1pm today, perfect for a trip up a river.

We loaded up and headed south to Whitford, but instead of launching where we had planned at Clifton Rd, we drove to the north down Broomfields Rd. This ramp actually leads down to Mangemangeroa Creek, and unfortunately had a chain across the top, but we were both keen enough to carry the kayaks down to the water’s edge.


It didn’t take long on the incoming tide to paddle around the corner and through the boats moored at the mouth of the Turanga. Rather oddly, there was also a small house tied to the bank, not on any floats that I could see.

We paddled up the main channel to the left of Wade Island, and explored a couple of tributaries, one which ended at a waterfall at the end of a large tunnel under the highway. At Whitford, we first turned left and paddled under the bridge, ending up beside the golf course at a rapid. Felicity managed to get herself over the first one, but couldn’t get much further.

Downstream of the highway again, we found the channel that leads to a convenient cafe where we ate lunch. Normally we would have brought sandwiches, but it was very pleasant sitting on a comfortable seat in the sun.

On the way back, we passed to the north of Wade Island, presumably named because seafarers have to get out of their kayaks and wade because it is so shallow. Fortunately for my feet it was a nice sandy bottom.

When I loaded the kayaks on the roof of my Nissan this morning, I neglected to check Felicity’s hatch covers were secured 🙁 When we unloaded them to start our adventure this morning, it was lost.

After we got home and cleaned up, it occurred to me that if it fell off, it was most likely to have happened in the first few km, so I pulled on my running shoes and went for a jog. Just as I had hoped, about half way down Lonely Track Rd, I found if on the side of the road with no signs of ill treatment whatsoever.

So all’s well that ends well!

One thought on “Turanga Creek Whitford”