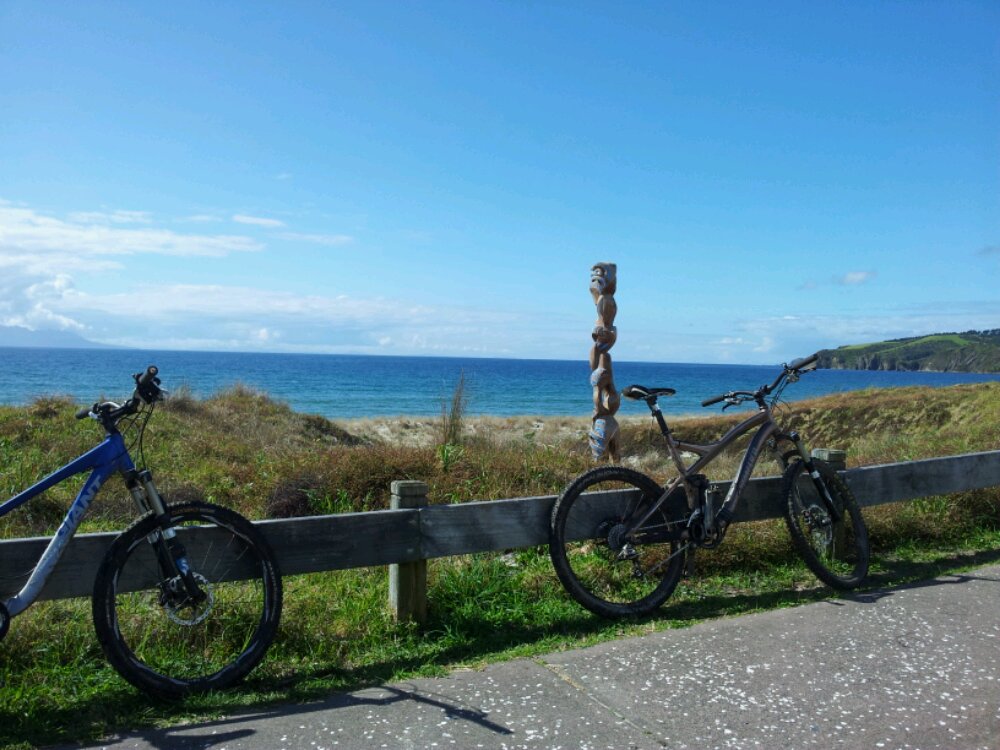 When I saw the blue sky this morning I decided I had to go for a long bike ride. Fortunately Kerry had the same idea, so by about 10AM we were on our way north, with a plan to ride at Tauwharanui.


Just after leaving Matakana, where we had stopped for coffee, I remembered the new cycleway I had spotted, leading down the hill off Takatu Rd towards Omaha. Kerry stopped to have a look and our plan suddenly changed.

After not much more than a kilometre, the trail ended on a country road, but we decided to ride along as there didn’t seem to be much traffic. When we reached the main road, we saw another cycleway on the far side of the intersection, so naturally we rode down there.

Eventually, we came to the Pt Wells Rd, so we rode into the village to look around. Down at the harbour edge, we could see the tide was fully in, and the water was fantastically clear. We rode around the coast as far as we could, until we ended up on somebody’s immaculate lawn, which now has four mountain bike tyre marks leading all the way across to their drive 🙁

Back on the road, we headed back out of town the way we had come, but once we arrived at the Omaha road we turned left and headed across the causeway. We decided to keep riding around the coast, although it soon became apparent we were on the edge of a golf course. We mostly managed to stay off the fairways, apart from a couple of places where they had built tees right on the water.

We couldn’t ride right to the end of the spit because there is a predator fence, so instead we crossed to the beach side where there is a maze of interconnecting walkways running all the way down to the other end of the beach.

The photo is where we stopped for a rest in the sand dunes; the carving is celebrating Matariki. The concrete path ended where the road finishes, but a gravel path continued along the edge of the creek for quite a way before we finally had to hit the road and connect back to the main road.

I reckon we rode past a couple of billion dollars worth of real estate today, most of it uninhabited by the look of the shutters and closed curtains. A very pleasant place to visit, with an impressive amount of landscaping in the many parks and reserves, but not the sort of place I would want to live.

One thought on “Omaha cycleway”