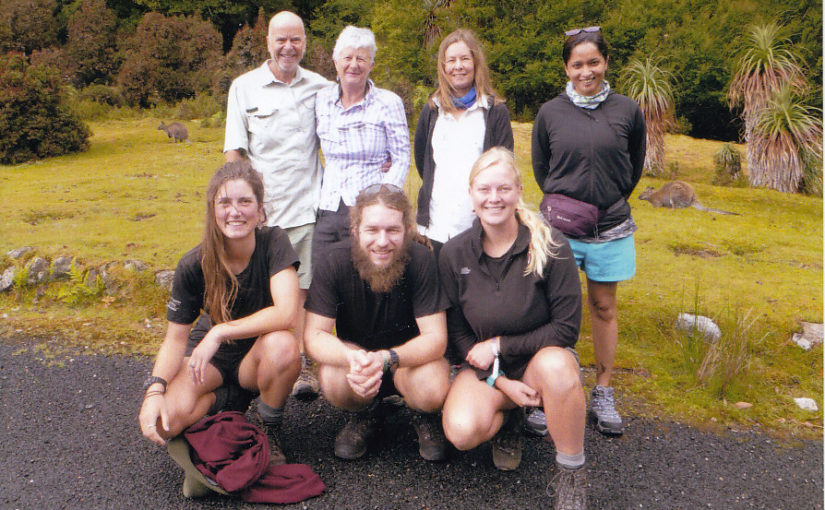 We’ve just returned from Tasmania, where we travelled to visit my mum. While we were there, we decided to experience what is considered one of the top hikes in the world.

The Tasmania Parks & Wildlife service warns that: “the Overland Track is a serious undertaking, for well–prepared walkers, with a good level of fitness and who understand the risks of walking in a remote alpine area“, so it is not just a walk in the park.


No worries for us though, because we decided to do it the easy way, using the Tasmanian Walking Company. They have a network of six private huts which they resupply with food (and wine!) by helicopter, twice a year.

Normally a group of twelve travel with two guides, but for some reason only two other women booked on our trip, so we got a lot more attention than we might have otherwise. To make things even better, a third guide who had not previously done this trip joined the group because it was small so we were superbly looked after and entertained.

The first day of the trip involved climbing almost 500 metres, so we were both been a bit anxious about reports of 30 degree heat in the recent past. Unfortunately, my supplications to the weather gods were a little too effective, and a small cold front arrived overhead just after we set out.

As you can see in the starting photo above, we were comfortable in light shirts just before we put our packs on. When the rain started, I just put on my trusty Gortex raincoat and kept plodding upwards.

The rain turned to sleet, then small hailstones, and finally snow. By the time we reached Kitchen Hut, an emergency shelter at the to of the hill, I was freezing cold, and my teeth were chattering so much I could hardly eat my lunch.

Even though we were sheltered from the wind and the sun had begun peeking through the clouds, I had to put on a thermal singlet, a beanie under my sunhat, a puffer jacket under my raincoat and waterproof overpants before I began to warm up again.

I must admit that I initially thought the required gear list was a bit excesive (it’s Australia in the middle of summer after all), and I knew we weren’t going particularly high, but it was a good lesson about being prepared.

All the huts were well-designed and very luxurious by our standards. As soon as we arrived, coffee, tea and snacks were available, and once we had all finished our hot showers (!!!), we were offered a changing selection of Tasmanian wines.

The meals were all very well thought out, and both Felicity and I were impressed that their budget was able to include a range of up-market local and imported products.

One of the highlights of the trip was learning about the plant Scorparia. One of the guides showed me that when you suck the necter out of each little (petal?), you get the taste of butterscotch. So now there are slightly fewer flowers beside the track from then on.

On the third day, there was an optional side trip to the top of Mount Ossa, which at 1,617 metres is the highest peak in Tasmania. As the last few hundred metres is gained by scrabbling over broken rock, this requires good weather, as it would be deadly in a high wind. We had an almost perfect clear sky, with most of the haze on the horizon caused by the wildfires which are ravaging the state.

I found it pretty easy going up, but my knees didn’t like all the stepping down. The view and the sense of being “on top of the world” made the climb another highlight.

We had been watching a helicopter flying in and out, and wondered if someone had been hurt. When we arrived at our hut, we discovered that this was the day of the mid-season re-supply. It was fascinating to watch how the pilot could winch down a heavy load into precisely the right spot. It’s possible he had some way of letting it go in a hurry if it tangled in a tree, but at 100 metres from the ground he might have no choice but to get it right first time.

Another evening we watched a wombat grazing on the grass outside one of the huts. Even though we were only a few meters away on the deck outside the animal did not seemed concerned by us.

We spotted several snakes ahead on the path (most likely the highly venomous Tiger Snake), and one White-lipped snake which is poisonous but has never been recorded as causing death to a human. All of them seemed more keen on heading off into a hiding place than attacking us.

Most of the days we managed to have a swim at our lunch stop. The shallow lakes were warm enough to splash about, but the Mersey river was freezing so our dips were brief! I was interested to see dozens of small trout, which have been introduced, but are breeding naturally. There was no signs of big trout like we see in NZ rivers, and no sign of any native Australian fish.

The last day was a short walk down to Lake St Clair, where I briefly plunged in despite a rather cool breeze. The lake was looking pretty bumpy, but I enjoyed the half-hour boat ride to the carpark at the other end despite having eaten more lunch than I really needed because it was so delicious.

For over a week before we departed, Felicity had been watching the updating map showing Tasmanian wild-fires, in the concern that our trip might get cancelled. There was a big fire to the south-east of us, and when we woke up on the final day we could smell smoke in the air. The only impact it had however was to force our bus home to drive a couple of extra hours because of several closed roads.