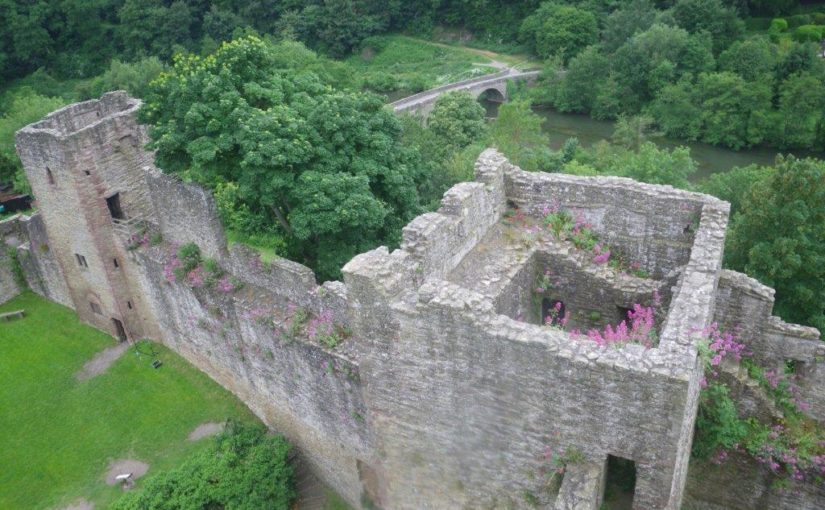 When we heard that the medieval town of Ludlow on the edge of the Shropshire Hills is one of the most attractive in the country, it shot to the top of our list for a day’s outing. We had to change trains at Shrewsbury, so it was nearly lunchtime by the time we arrived.

I had downloaded a walking guide on the train, so we set off on the route described, along a road for a few hundred meters then through a stone arch into St Leonard’s churchyard. We were directed down some small lanes and paths, then out into a field where we saw a spring known as the Boiling Well. It was given that name because bubbles (occasionally) rise to the surface of what is more of a puddle than a well, not because it is hot or even slightly warm.

This is because it is at the base of a terrace made from rocks and gravel deposited by meltwater from ancient glaciers. In the early 20th century, Geology Professor William Watts discovered that the rocks were made of andesite and dolerite from Wales in the west, mixed with granite and granophyre from the Lake District to the north.

Our next stop was at the Dinham Bridge over the River Teme, where we sat on a bench to eat our sandwiches. There are three weirs on the river which each channel water into a mill. After lunch we went over for a closer look at the mill house nearest us, which was converted to run a hydro-electric generator in the early 20th century.

In medieval times, the water mills were a source of considerable wealth for the town, because farmers from miles around brought their grain to be made into flour. The first record of a mill to grind corn on this site is in 1331. In Victorian times, the water was used to power an iron and brass foundry.

In the river we were delighted to see two guys paddling coracles. The larger craft is a Welsh design, but the small rounder boat is a traditional Teme variety. They used to be made of animal hides, then flannel painted with pitch and tar, but the owner we talked to said he used liquid rubber because it is much less messy and looks pretty much the same.

I tried to convince him to paddle over the weir while I took a video, and promised to make him famous on Youtube, but they both climbed out and carried them over instead. With only one narrow paddle, progress seems to be rather slow, but in 1974 someone crossed the English Channel to France.

After crossing the bridge, we climbed up a hill through the forest into the Whitcliffe Common Nature Reserve. This used to be grazed by local farmers, but since it became a park it gets mowed once a year to maintain the meadow areas with their wildflowers. There is a viewpoint at the top from where we first appreciated what a pretty and unspoiled town we were visiting.

After walking back down to the river, we continued along the bank through the gorge. This path is called the Bread Walk, supposedly because the builders were paid in bread so that they would feed their families insted of spending their wages on booze.

We arrived in Ludford where there is another bridge. At the corner of the road, a sign informed us that in 1832 Dr Thomas Lloyd, the Ludlow doctor and amateur geologist, met Roderick Murchison here to study the rocks exposed along the River Teme. They found the remains of early fish bones in the sand mixed with terrestrial plants, above the marine layer from when this area was at the bottom of the sea.

They believed that this was the earliest occurrence of life on land, and Murchison cited the Ludlow Bone Bed as the base of his proposed Devonian Period. The site is now an SSSI (Site of Special Scientific Interest), and a geological interval of time known as the Ludlow Epoch is named after the town.

We diverted slightly uphill to explore a courtyard in huge old estate, and the 11th century St Giles church. Then we crossed the Ludford Bridge and headed up Lower Broad St toward the town. The first thing we noticed was a blue plaque on a wall marking a hospital established in 1220 by Peter Undergod “to provide relief for poor, infirm and weary travellers”.

Broad street was the centre of Ludlow’s cloth making industry in the 12th Century. A street running off it is named Walkmill because the process of “fulling” wool was carried out by workers using their feet.

There was a strange sign diverting heavy traffic to the east, with a message warning of “GPS Error”. The reason for this became apparent at the top of the hill where the road goes through Broad Gate, the last surviving entrance through the old town wall. It may have been broad by medieval standards, but it was built to accommodate wagons, and while a small car might squeeze through there is no way a truck or bus would fit.

Beside it is the Wheatsheaf pub, built in the 17th century. At that time there were 55 pubs in the town, of which this is the last still in operation.

The old town is fascinating, with very few buildings dating from later than Victorian times, and many from Tudor or earlier. Some were hanging out over the street at alarming angles. Narrow lanes led off at right angles, often with courtyards at the end.

Eventually we came to the market square, where a regular Sunday antique market was taking place. We hurried past, because we were keen to explore Ludlow Castle which stands at the end of the street. This turned out to be much bigger than it looks from the outside. It was begun in 1075 by Roger de Lacy, son of a French nobleman who went to England after the Norman Conquest a decade previously.

The castle was not built to defend the town, which was planned and built afterwards, resulting in a regular grid pattern of streets which is somewhat unusual in medieval settlements. The purpose of a military installation in this area was to subdue the unruly Welsh, because the border is nearby.

Inside the outer gatehouse is a large open area where the townspeople could retreat with their livestock during sieges if the invading Welsh broke through the city walls. In more peaceful periods, the space was used for mock battles and tournaments. During our visit, a company of actors was rehearsing Shakespeare’s “As you like it” for our entertainment.

In the 15th century, Prince Edward and his brother Richard, known as the “little princes in the tower” were imprisoned here because their father King Edward IV hoped this would prevent problems on the volatile border. Following his death in 1483, they were murdered by their uncle who became Richard III. I remember this story from another Shakespeare play.

Life in the castle was probably fairly civilised, for the lords at least. Many of the bedrooms had en-suites with basins to wash in, and toilets which discharged into chutes leading outside the wall. We explored a small underground room at the side of the moat, which has always been dry but filled with brambles, thorny bushes and sharp stakes. The room had a small grill in the roof to let in light, and was used to store huge blocks of ice which were cut from the Welsh mountains and transported wrapped in straw.

In 1501, Henry VII’s son Arthur bought his bride Catherine of Aragon to Ludlow Castle for their honeymoon. This was supposed to bring peace between England and Spain. Unfortunately he was in poor health, and rumor has it that he was unable to consummate the marriage. In any case he died of plague a few month’s later, and Catherine subsequently married his brother Henry VIII.

As you may know, this didn’t work out well because Catherine was foolish enough to give birth to a daughter instead of the son and heir Henry wanted. His decision to divorce her on the grounds that he should not have married his brother’s wife led to the split away from the Catholic Church and the formation of the Church of England.

The castle must have had construction going on somewhere through most of its history, because it is obvious many changes were made and new sections added. Ludlow Castle was particularly important because it was the centre of administration for the English border areas. Sir Henry Sidney built apartments for Judges and court officials of the Council of the Marches in the 16th century.

It was a long and fascinating day. After seeing how beautiful the Shropshire Hills area is, we are both keen to come back some day and do some more walking. Ludlow has a reputation as a foodie centre, with an unusual concentration of young innovative chefs, so it would be a great base for exploring the surrounding countryside. As is so often the way, our visit has resulted in our bucket list getting even longer.