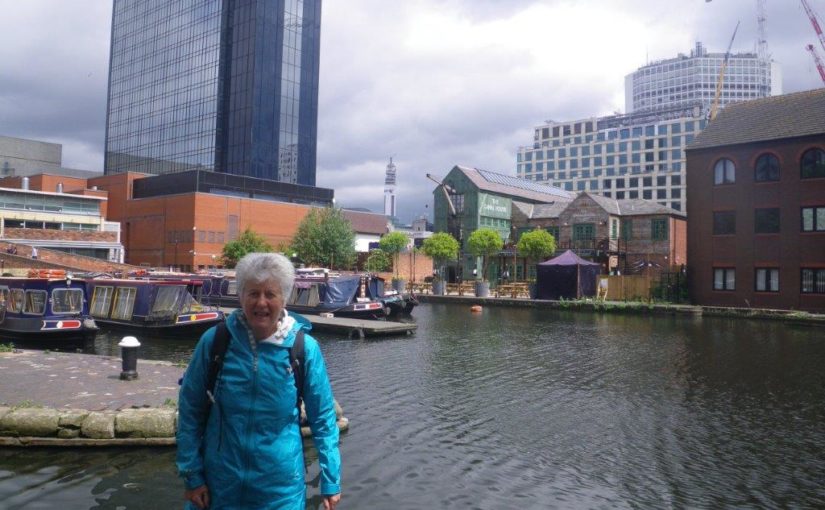 When we told people where we were planning to base ourselves in the UK, the reaction was almost universal: “Birmingham? Why on earth would anyone want to go there?” After our first few days here, our conclusion is that the city’s biggest problem is its public relations, because it is a attractive and interesting place.


When we first stepped out of the station after our trip up on the train from London, I thought it was going to be even worse than we had been led to believe. We saw dozens of druggies and/or mentally unwell sleeping in doorways or begging on the side of the road. In the early part of the 20th century the city was relatively wealthy, but with the collapse of car manufacturing in the 1970s unemployment has become an increasing problem.

Our walk to our apartment was past several derelict buildings and due to the fact that we didn’t recognise the postcode we had been given – which unlike NZ would have led us to the exact address – it took quite a while dragging our suitcases through backstreets before we finally connected with our landlady.

We soon discovered that if we walked past the building site that is the view from our window, there is an attractive area beside a canal with cafes, restaurants and bars. This is not so good when drunks are heading home in the early hours of the morning, but it is great to be able to head off on long walks along the towpaths without encountering any traffic.

In the middle of the map above, about a third of the way up from the bottom, a building named Mailbox is right beside where we are staying. The area used to be a railway yard where goods were loaded to and from canal boats. In the 1970s, Birmingham’s biggest building was built on the disused yard for the Royal Mail. It subsequently became largest mechanised letters and parcels sorting office in the country with a floor area of 20 acres.

By the end of the 20th century the building was no longer needed for its original purpose, so it was sold to a developer who built a couple of hotels, numerous apartments, and a large retail mall. It also became home to the Midlands branch of the BBC, and we have already seen newsreaders being interviewed on the balcony outside.

On our first day, I spent most of the time on my computer catching up on work while Felicity visited the University of Birmingham to give a lecture. In the late afternoon however, we spent a couple of hours walking along some of the canals. We have been told by at least three people that Birmingham has more canals than Venice. This is pretty much the centre of the country’s canal network, and you could travel by boat up past Leeds in the north, Liverpool in the west, and of course London in the south.

In the days before railways, the canal system was one of the components which made the industrial revolution possible. One man leading a horse could transport around a hundred kilos of goods, but if the horse was towing a narrowboat the load could be fifty times heavier. When boats began to be fitted with diesel engines in the 1920s, and could tow an unpowered “butty”, the total load capacity increased to 70 tons.

As we neared home, we came across a very unusual curved building covered with silver discs. It is the Selfridges Department Store, and is just as unusual and impressive inside. We entered via a lift in the carpark and walked across the pedestrian bridge you can see above Felicity’s head. It was completed in 2003, and has won numerous architectural awards.

On Friday we set off walking in the late morning, and headed for the Jewellery Quarter. The first record of a goldsmith in the area is from the middle of the 14th century, and by 1780 there were 26 businesses here. A century later, it is estimated that around half the gold and silverware sold in London came from Birmingham. Even today, despite increased competition from overseas manufacturers, Birmingham supplies 40% of the jewellery made in the UK. We walked past hundreds of shops, marveling that there is so much demand for these products.

The Warstone Lane Cemetery captured our attention as we passed it, mainly because the sign mentioned that it had catacombs. They were used during WW2 as air-raid shelters, but now they are permanently sealed up. The two levels are built in an old sand quarry, and we learned that in 1846 the Birmingham Cemeteries Act required all coffins interred within the catacombs to be sealed with lead or pitch, due to the ‘Unhealthy vapours and unpleasant smell emanating from them’.

We headed back towards the city, and discovered the huge Bullring market, on the other side of the railway station where we had arrived in town. This market has a fantastic array of fruit, vegetables meat and fish from all over the world. It is definitely where we will be buying most of our produce over the next few weeks. The market has been in continuous operation since 1154 when local landowner Peter de Bermingham received permission from Henry II. The name originates from an iron ring in the centre of the market which cattle could be tied to.

Today we joined a guided walking tour of Birmingham, run by an enterprising local couple. I was fascinated to learn that when the town was getting established in the middle ages, there was a dispute about who had the right to levy road tolls and the lord ended up in the Tower of London. This left the area with no local ruler which was almost unheard of at that time. Attracted by the freedom to run businesses with no official interference, craftsmen of all kinds flocked to the area and established themselves.

At the beginning of the tour, we were shown a series of bronze markers on the ground outside the town hall, which is a replica of similar markings that were on the wall of a previous building. These accurately record yards, meters and chains, which allowed purchasers of goods to check they were getting the correct length and not being ripped off.

Until the end of the 19th century, life for working-class “Brummies” was pretty grim. The air was badly polluted, the water was downright dangerous, and there were many areas of slum housing. A popular local politician named Joseph Chamberlain demolished most of the slums, and built several wide roads and parks in their place.

His best action however was to create a huge reservoir in the Welsh Elan and Claerwen valleys, which required the removal of over 100 houses. They built a 116 km long pipeline to bring water to the city, which because it is fed by gravity takes almost three days to arrive. The result is some of the nicest tasting tap water in this part of the country.

The tour then visited the Library of Birmingham, which was opened in 2013 and is the largest and flashest in the country. It is apparently the largest public cultural space in Europe, and is likely to be the last library of this scale built now that the internet has arrived. Sadly, in 2015 many of the original staff were laid off due to shortage of funds, and opening hours reduced to 40 per week. Nonetheless, there are over 2.5 million visitors each year, making it the 10th most popular visitor attraction in the UK.

We all went up in the lift to a “secret garden” on a roof-top terrace, where we could look out over the city. As the lifts go up and down, a loudspeaker quotes various literary works. I was able to impress the group by recognising that: “Twas bryllyg, and the slythy toves, Did gyre and gymble in the wabe” came from Lewis Carrol’s Jabberwocky.

Behind me in the final photo is the The Crown pub, which is famous for being the birthplace of heavy metal music. Rob the guide told a story about future Black Sabbath guitarist Tony Iommi being about to leave on a tour of Europe with a previous band. He had been working in a sheet metal factory, and on his last day he accidentally chopped of the tips of two fingers on his right hand. Because he was left-handed, this meant he could not pick individual strings with his strumming hand.

Although he was told he would never play guitar again, a factory foreman played him a recording of famous and brilliant jazz guitarist Django Reinhardt who played with only two fingers after an fire injury. Iommi was inspired to continue, and made himself plastic finger tips by melting down a plastic detergent bottle and shaping it with a soldering iron.

When the Crown was put up for sale many people wanted to convert it into a Rock-n-Roll museum. Led Zepplin, Status Quo and UB40 had also played regular gigs there, but it was sold to developers and has been empty ever since.