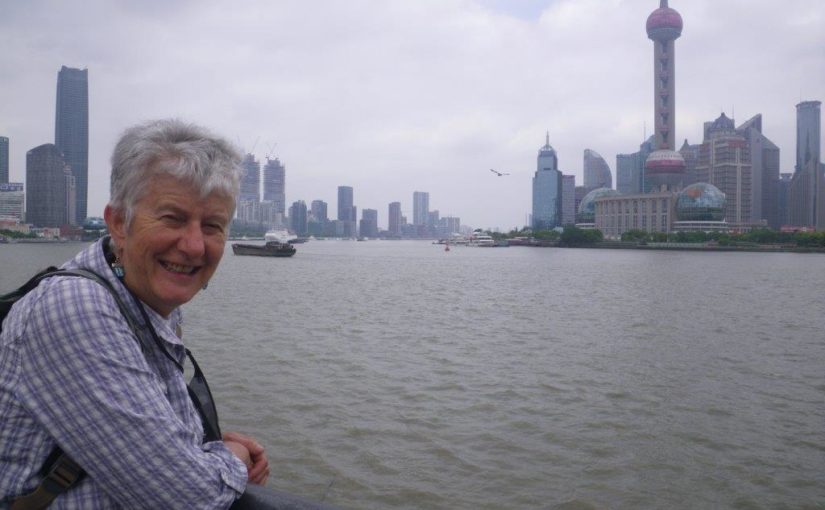 When we landed at Pudong airport and joined the long queue for immigration I was encouraged to see a sign saying that they process 98% of passengers within 20 minutes. We must have been in the 2% because it took over an hour to get to the counter, where we learned that because we wanted a 72 hour transit visa on demand we should have been in a different queue at the far end of the room.


We were then informed that we needed to fill out a different form from the one given to us on the plane, and that these had just run out, so that caused another 10 minute delay. By the time we had gained the necessary stamp in our passports the baggage conveyor was stopped and empty, so we had to search for another counter where our unclaimed suitcases had been taken. Our relief at finally finding them was tempered by the fact that Felicity’s brand new case had lost a wheel, making it rather difficult to tow.

After that small set-back things went better, and we figured out how to use the metro to get to Longyang Road where I had booked our hotel. The good thing about the delay was that our room was ready, and we were able to unload our day-packs before setting out to explore.

Our first stop was the Bund, which is a raised walkway along the banks of the Huangpu River. This is where all the flash hotels, banks and corporate headquarters were built at the beginning of the 20th century, so there are lots of interesting art-deco buildings to admire. We headed north-west, crossed Suzhou Creek and continued on to the district of Hongkou where the Jewish Ghetto used to be. Jews arrived in Shanghai soon after the opium wars, looking for business opportunities so by the 1920s there were many wealthy families living there.

When the Nazis gained power in Europe, China was one of the few countries which would give visas to Jewish refugees, so the community in Shanghai grew to over 25,000. We were given a guided tour through the old synagogue which gave us an interesting insight into life 100 years ago. It was nice to see a wall with 23 thousand Jewish names recording survivors instead of victims.

The metro took us back to the central area where we walked up Nanjing Road to the Peoples Park. This used to be the Shanghai racecourse until the communist government banned gambling and it was converted to a public area of gardens and water features. We walked around until we came to an odd sight.

Hundreds of people were sitting along the sides of the paths with umbrellas in front of them. Each one had a notice pinned on to it, and although we could not read the Chinese characters we figured out from the visible numbers that they were advertising their children as marriage partners. Apparently many of these parents attend despite their children’s objections, but presumably enough of them are successful to encourage the others to continue.

On Sunday we decided not to eat breakfast at the hotel, and instead walked down the street to see what we could find. This turned out to be an excellent choice, because just around the corner we discovered a women on the side of the road making a kind of filled pancake. She started with very thin batter like a marsala dosa, smeared an egg over the top while it was cooking, chucked on sprinkles of coriander and chopped garlic, then an unidentifiable sauce and what looked like crispy pork skin. We shared one between us and it was so delicious that we went back after a coffee for a second round.

Our first destination for the morning was the old walled city which was packed with tourists but very interesting, with dozens of narrow lanes lined with shops and houses. We visited a Daoist temple and were surprised to see hundreds of people burning incense and praying in front of statues. I was under the impression that this religion did not have a god, but apparently they borrowed divinities from other faiths. The most popular god seemed to be the god of wealth! I had been expecting the “walled city” would be a token row of old houses as in Singapore, but this was a huge area that took us several hours to explore.

In the afternoon we caught the metro to the old French Concession, where the streets are wide and lined with trees. Several of the large luxurious houses had been the homes of famous Chinese writers, and these are open to the public. By the 1980s we could see that some people had relatively comfortable middle-class lifestyles.

After walking most of the day on hard surfaces we were getting pretty tired by evening, so we bought a coffee and headed back to Peoples Park to sit on a bench and watch people. Several people came up to us to practice their English which was interesting, but unfortunately they were joined by a keen communist who believed that North Korea was the best society on earth. He used his phone to translate (badly) and insisted on showing us his collection of propaganda videos which got boring pretty fast.

While we walked through an underground shopping mall we passed an amusement parlour with one of the fanciest virtual racing car games that I have ever seen. Computer games of all kinds are popular here, and it is rare to see young Chinese without a phone or tablet in their hands.

On Monday morning we checked out of the hotel and caught the first Maglev train back to the airport. On my previous trip it briefly got up to 340 km/hr, but this time it stopped accelerating at 300 km/hr. We flew to Zurich and then changed planes for the final leg to London where my nephew Ben was waiting at Heathrow to pick us up.

3 thoughts on “Weekend in Shanghai”