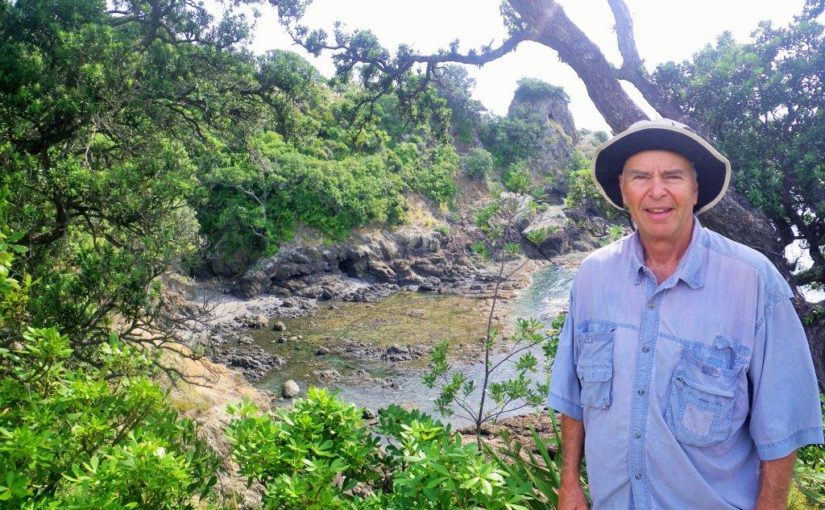 Felicity wanted to talk to the doctor at Te Kaha’s medical centre about student placements, so we stopped for half an hour to enjoy a cup of tea with her. She told us that our planned campsite at Omaio would be very busy because it is right next to the cemetery and a big tangi is happening. She suggested we could stay at her mother’s property a few kilometers further on.


Just after the long concrete bridge across the Haparapara River, we pulled off the road and drove down a rough track on to the river bank. We had been told that there is a big pool that is good to swim in, so it seemed like a good place to stop for lunch. We realised that if we were directly under the bridge, we could swim naked without being seen from above, so we took the opportunity. Since we weren’t particularly hot, it was a fairly short swim in the cold water.

We had just got dry and dressed back at the motorhome when a couple of other vehicles turned up with swimmers, so we were lucky to have the place to ourselves.

Whitianga Bay is mostly rocky, but it is an attractive place. We parked on a lawn surrounded by fruit trees, and went to find our hostess. She is a health administrator, so her and Felicity spent a while talking shop while we admired the spectacular sea view from her deck.

There is a small track down to the shore, which we followed around as far as we could. There is a field of corn at the edge of the cliff, but we had been given permission to walk around it, so we continued along the coast. We came to a bit of a point where there was a rough track down to the sea, probably used mostly by fishermen. We scrambled down it an continued around the rocks.

When we got back I was ready for a swim, so we had a cup of tea then walked down to the sea. I considered taking a snorkel, but the sky was cloudy and the sea rough, so I didn’t think the visibility would be much good. There is an outside toilet for campers on the side of the lawn, with an excellent cold shower so we are both now sparkling clean.

We are getting a bit low on supplies, so we were pleased to find a tree laden with ripe figs to add to our breakfast. After another medically-orientated discussion with our hostess, we hit the road and headed for the supermarket in Opotiki, back into internet land.

One thought on “Whitianga Bay”