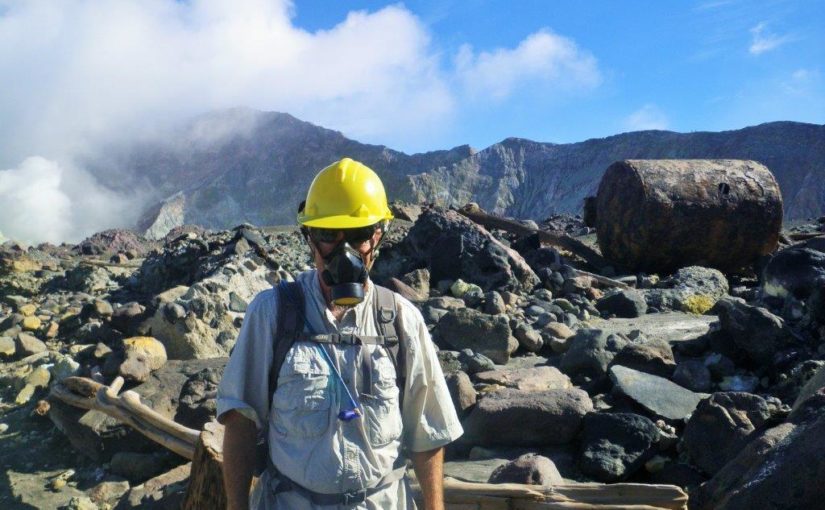 For the last couple of days, our view has had White Island steaming gently on the horizon. We have both wanted to visit for ages, and even made a booking once, which was cancelled by wild weather. When we inquired at the Opotiki I-site yesterday and discovered that the conditions today would be as good as they ever get, we knew we had to head straight for Whakatane.


We parked in an inner-city carpark which allows freedom camping, and went for a walk along the river bank. On the way back we looked closely at a grapevine, that at first seemed to have been completely stripped by birds. When we looked under the leaves down low however, we discovered vast numbers of ripe grapes. We hadn’t bought anything to carry them in, so we ate about half a kilo each sitting at the side of the walkway.

Early in the morning we ate our breakfast and drove into town for a 7.45 check in at White Island Tours. We found a parking place right outside, went in and signed our lives away, as you do on these sorts of tours. I was relieved to see the boat was a catamaran, which is a much more comfortable boat in big seas than a single hull.

At the harbour entrance we saw the statue commemorating Wairaka, daughter of the Mataatua waka captain. When they first arrived from Hawaiki, the men leaped ashore to see if it was safe, leaving the all the women and children on board. Unfortunately they didn’t tie it up properly, and the waka began drifting back out to sea. Although it was forbidden for women to even touch a paddle, Wairaka ignored the tapu and paddled back to shore, saying: “Kia Whakatane au i ahau’ – I will act the part of a man.”

We were about an hour into the 90 minute trip when the skipper suddenly turned the boat, then slowed to a stop. Next minute, hundreds of common dolphins were swimming around us, some jumping right out of the water, and others coming over to ride our bow wave as we slowly cruised alongside the pod. These are quite small dolphins, around 2 meters long, but the number of them was enormous. The skipper told us there were probably over 500 in the pod.

The boat anchored offshore, and we were transferred to the wharf in a small inflatable, eight tourists at a time. We were in a group of 25, with two guides to look after us. They asked for six volunteers to help with emergency drills, intended to keep the guides familiar with procedures. At one point we had to be quickly lead away from the crater walls, which often have rock-slides. Later on we had to pretend the main crater was erupting, and hurry away to find a big rock to hide behind. The whole group had to pretend there was a white-out, and hold hands to be led along the path.

Most of the time we didn’t need the gas-masks, but every now and then the wind blew the steam in our direction, and it was very unpleasant. The gas turns into sulphuric acid on contact with water, so the back of your throte is irritated. They gave us boiled lollies to suck so that we would have extra saliva.

There is quite a lot of solar powered monitoring equipment around the island, continuously sending data back to GNS Science in Wairakei near Taupo. Everything metal on the island gets damaged by the acid environment.

Our group was led past steaming vents, and eventually up to the main crater. This used to be a lake, but recent activity has ejected most of the water. We had to keep well back from the edge because of the risk of a rock slide. Even scientists are very reluctant to go into the main crater because it is so dangerous.

On the way back we were encouraged to taste the water in two small streams, quite close to each other but draining different areas. The first, which was warm, was tasted of iron and salt, “like blood” according to one young German man. The second stream had a citrus-like tang. Neither was remotely drinkable. There was an attempt to build a dam for drinking water around the coast from the volcanic area, but it quickly became contaminated.

Around the beginning of the 20th century there were attempts to mine sulphur, mainly for fertilizer. Because of the difficult environment, these businesses were never profitable, and the mining was abandoned in 1914. The factory where the ore was smelted, allowing the sulphur to melt and rise to the top of the vats, is now in ruins. While the steel in the concrete and all the machinery is badly corroded, there are huge Oregon pine beams and a couple of rubber tyres in surprisingly good condition.

We walked around for about an hour an a half before being transferred back to the big boat for a packed lunch. We were very satisfied with our adventure, and it is great to look out to sea now and know what is out there.

After four of us had a swim off the boat, we circumnavigated the island to see the other side. On the way we disturbed a school of flying fish, which leaped out of the water and glided along for an astonishing 50 meters or so, far longer than our 20 meter boat. It didn’t look as though they were flapping their fins, so they must get all their momentum by swimming, then be really good at gliding.

On the way back we stopped to watch a pod of pilot whales. These animals are actually one of the largest dolphins, and some we saw were 6-7 meters long. There were dozens of them, some of them babies still swimming beside their mothers. When a couple of the big males surfaced right next to the boat I could see why they had been considered whales.

The pilot whales were accompanied by a pod of bottlenose dolphins, which were around 3-4 meters long, and had the distinctive pointed nose. It was so exciting seeing them showing how high they could jump.

The boat’s second halt was to look at a huge ball of anchovies, forced to the surface by hungry skipjack tuna down below. I could just see a dark shadow with flashes of silver. The skipper pointed out an oil slick on the top of the water, caused by so many anchovies being crunched by sharp teeth.