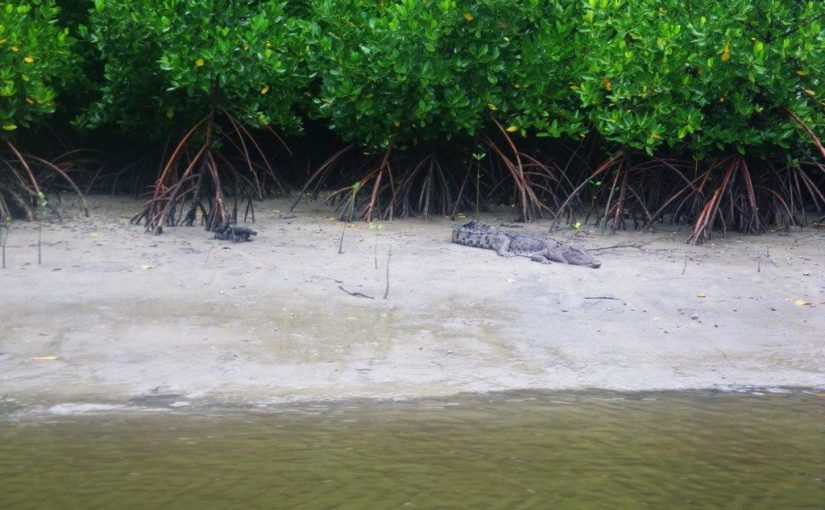 They don’t call it rainforest for nothing – it has been wet every day of our Queensland trip so far. As I have been writing this post we have been forced to move further under a wide veranda to escape the deluge. With temperatures around 27 degrees this is not as bad as it sounds, and we have been enjoying our adventures so far.

As we flew into Brisbane, we hired a car and drove up to the Sunshine Coast to visit the grandsons for a couple of days. Eli let us sleep in his playroom, which meant we were woken at the crack of dawn to play with him – a pleasure when it is only for a few days.

The first day we walked into Tewantin to have a look at the cafe Tom and Courtenay are about to purchase. It will be called “Potter’s Pantry Cafe”, and is situated in a mall on the sunny side of the main street. They are allowed to put tables in the common area outside, so they should have good visibility to passers-by. When the cafe part of the business is running smoothly they hope to produce a range of preserves and condiments. Felicity managed to find a copy of Digby Laws’ book of chutney and pickle recipes online which might help inspire them.

On Monday we went to the local bike shop to buy Eli a decent size bike. He has been off the trainer wheels for a couple of months, but his first bike is really too small for a nearly five-year-old. He was a bit hesitant at first, and had a couple of tumbles while he learned that a big bike needs a bigger turning circle.

After a couple of goes he started getting confident and we decided to ride to a park across the road where there is room to get up some speed. Tomas lent me his bike, so I got to fulfil my ambition of riding with my grandson – hopefully the first of many over the next few years. I told him to stand up when riding over bumps, and he got it immediately – I’m sure it wont be long before we can tackle some of the bush single-track near his home.

I lived in Cairns for about six months back in the mid 70’s, but I didn’t recognise anything during our overnight stay. Our room was in an old wooden guesthouse down on the Esplanade, about 15 minutes walk from the downtown area. We made a visit to a supermarket to stock up on food, then returned later on for dinner at the night market.

We had hired another car at Cairns airport, so we were able to do a bit of sightseeing on our drive north. Mossman Gorge seemed like an interesting place, so we packed lunch and walked up the road to the start of the walking trail. Most people paid $9.00 to get driven up in a shuttle bus, but since it was only 2 km we preferred to walk. There was a sign saying that the local Aborigine community requested that tourist didn’t walk through their village, but I imagine that is because they operate the bus!

The road actually passed by outside the village, so we didn’t feel as though we were intruding. It was interesting to see a huge truck with pull-out sides offering cooking lessons. This is part of Jamie Oliver’s “Ministry of Food” projects, but is mostly financed by the Queensland government. Seems like a good idea to me.

The track through the forest is mostly board-walked, and very pretty. This park is at the southern edge of the wet rain-forest area, so it is very lush and tropical compared to the mostly eucalyptus bush to the south. We sat on some boulders at the side of the Mossman river to eat our lunch.

Just north of Mossman we caught the ferry across the Daintree river. This is quite a big waterway, which creates a natural barrier to some species of animals and plants. The ferry is fastened to two cables strung across the river, which presumably drop low enough to allow other boats to pass over the top when travelling up the river.

Our accommodation for the next two nights was at the Crocodylus Eco Village, which is well off the grid and deep in the rain-forest at Cow Bay. Most of the buildings are made of canvas permanently attached to wooden frames. At times during the night there were many strange sounding shrieks and bird calls to remind us that we were in a foreign environment. The useful information sheet we were given included the advice that if a leech gets on your eyeball you should not attempt to pull it off, burn it off or put salt on it. Instead you must wait 20-30 minutes till it is full of blood and drops off by itself.

When we were driving north the next day we stopped to look at the Daintree tea plantation. Unlike the plantations in India and Sri Lanka, these leaves are harvested and processes mechanically with equipment that shaves off the new growth once a fortnight. The operation was started in the late 1970s, and as the trees will live for a century or so the regular harvest should continue with little further investment.

We booked ourselves on the crocodile spotting boat which travels up Coopers Creek. Unfortunately the alpha male in this area was the one who ate the NZ woman at Thornton beach a couple of weeks ago, for which it got shot. When I read about it in the newspaper I wondered if the locals simply shot the first croc they came across as a public relations exercise, but apparently there is only one large male in each river and a necroscopy showed it had human body parts in its gut so it looks like they identified him correctly.

He left behind about half a dozen females who each control about a kilometre of river bank. We saw two of them, both a bit over three metres which is not quite as terrifying as the six metre male would have been. On the boat they showed us a photo of a giant croc from the early 20th century which must have been nearly 10 metres, and getting on towards 180 years old. Crocodiles were hunted almost to extinction by the 1970s, so there are no enormous ones left as far as they know.

When I took Felicity’s photo at Thornton Beach she was strangely reluctant to stand close to the water’s edge.

After the boat ride we drove to Cow Bay to eat lunch and walk along the beach. It seemed strange to be hot on a beautiful tropical beach yet not be able to swim in the sea due to the crocs. There was a sign telling us to respect the local aborigine men’s ‘cultural place’, which turned out to be a falling-down shed surrounded by vast amounts of junk and empty beer bottles. We didn’t feel inclined to venture close.

Just to the south we hiked around the Jindalba boardwalk which was very easy and attractive. There were signs warning that if we encountered an aggressive cassowary we should back off slowly and try and get a solid object like a tree between ourselves and the bird. I was a bit disappointed that there were none to be seen. There is a much longer loop track ‘for the adventurous’ which we continued on – this was very rugged and slippery, and not very well marked. I was becoming mildly concerned about whether or not we were still on the correct route when the sound of traffic let us know the highway was only about a hundred metres away.

I also heard some wild pigs grunting, but they crashed off into the bush before I could spot them. We were told that there are thousands of pigs living in the rainforest, but as no firearms are allowed they can only be hunted with bows and arrows. A bit further on we heard some more grunting, and saw two pigs heading away up a bank quite close to us.

After dinner we and another NZ woman went on a guided night walk with Steve from the resort. He told us lots about the various trees and insects that we came across. I was lagging a bit behind, and looking mostly for animals, so I was delighted to spot three Boyd’s Dragons clinging to the sides of trees. Felicity pointed out a cane toad, and Steve found a tiny tree frog and a sleeping bird on a fan palm leaf with its head tucked under its wing.

Now we are back in Port Douglas, looking forward to a snorkelling trip on the reef tomorrow.