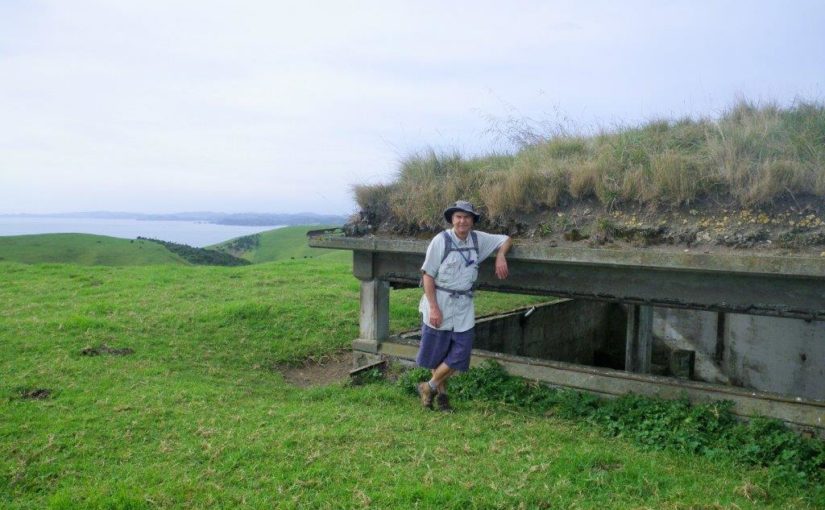 The Motutapu camp at Administration Bay is an ex-WW2 military facility that is now used mostly by school groups for outdoor education. When it is not full of school kids, members of the public can book the old barracks for group events. One of Felicity’s colleagues has a great love of the island, and decided to hold a weekend party to celebrate her 50th birthday.


We could have just gone across for the Saturday night, but we decided to make the most of the opportunity and booked a place on one of the two water-taxis that made the trip on Friday from the Royal Akarana Yacht Club on Tamaki drive. We were expecting to walk from the wharf at Rangitoto’s Islington Bay, but by the time we arrived it was beginning to get dark, so we were glad to be offered a ride with all the luggage in one of the camp’s vehicles.

One of the advantages of arriving early is that we were able to score one of the few private rooms at the end of one of the barracks. Because the group was still fairly small, we cooked dinner in one of the beach-front cottages instead of the main camp kitchen. As the first users of a newly installed gas barbeque, we identified a major design fault when the fat dripping down caught fire, and continued to blaze fiercely even after the gas was turned off. As the wall behind the barbeque was wooden, things were looking a bit serious until I fitted the metal lid between the flames and the wall, sacrificing the new paint but saving the building.

After breakfast on Saturday, Felicity and I set off on a long walk to explore the northern end of the island. Our first stop was at the gun emplacements at the top of the hill, where a huge artillery installation was commissioned in the 1930s. The underground magazines are still open to the public, so we explored all the tunnels and rooms with our torches.

Heading east, we climbed up past the trig, where we inspected a grass-roofed observation post, then descended to Station Bay. I had been expecting the track to continue north around the coast, but a map down at the beach showed us we had to climb back up the hill to the ridge. We decided we might as well take another side track down to Waikarapupu Bay, then climbed up yet again to join the main Pohutukawa Track out to Billy Goat Point. We stopped to enjoy the view of Rakino Island, which is quite close to the north end of Motutapu, then walked back south along the western side of the island.

As the tide was fully out when we arrived back at the camp, and it was still an hour till lunch, we decided to go for a snorkel on the reef at Sandy Bay, just north of the camp. Although the area is not an official marine reserve, fishing is strongly discouraged, so there is a lot of sea life. It didn’t take long before we had half a dozen snapper following us around, no doubt expecting us to break open a kina for them to eat. Feeding fish regularly produces rather untypical behaviour, but I guess it means the kids do get to see something. At one point I saw a large stingray gliding past underneath me, but unfortunately Felicity was too far away for me to attract her attention.

After lunch we borrowed a couple of the camp’s kayaks and paddled out around a small island at the end of the reef which shelters Administration bay. The sit-on-top boats were not as comfortable or as fast as our own kayaks, but it was still very pleasant to be out on the water.

The camp has a high rope course, and part of the deal is that instructors are available to supervise guests if they are keen to try. It was a bit scary climbing up the first time, but after you reach the top you let go, the belay team on the ground gently lower you down and you realise it is actually pretty safe. The photo is of Felicity on the “vines” section.

After a gourmet dinner followed by birthday cake (made entirely of cheese) and a series of toasts, there was a prizegiving. Felicity and I were awarded the YOLO (You Only Live Once) cup for taking full advantage of all the adventure opportunities on offer. There is a great photo of this presentation somewhere which I have been hoping would turn up in time to be included with this blog post, but I have given up waiting. The music which followed was a bit too disco for my taste, but we enjoyed a good dance until bed time.

Fiona had organised a flying-fox session first thing in the morning, which involved whizzing down a cable and splashing into a cold, muddy pond. With a reputation to uphold, Felicity and I both felt obliged to have a turn. Fortunately the camp has warm showers!

While our breakfast was digesting, we spent an hour or so helping with the party clean-up. We then went for another snorkel at the other side of Sandy Bay, and again saw hundreds of fish. One enormous snapper that cruised past us must have been around 15 kg – certainly the biggest I have ever seen.

In the mid-afternoon we loaded our gear into the camp vehicle and were taken to the wharf at Home Bay, where the regular ferry from Waiheke picked us up and delivered us to Auckland. Another couple had also left their car at the yacht club, so we shared a taxi back along Tamaki Drive. It was great to have had the opportunity to explore the north end of Motutapu where I have never been, even though it is less than an hour from the city.