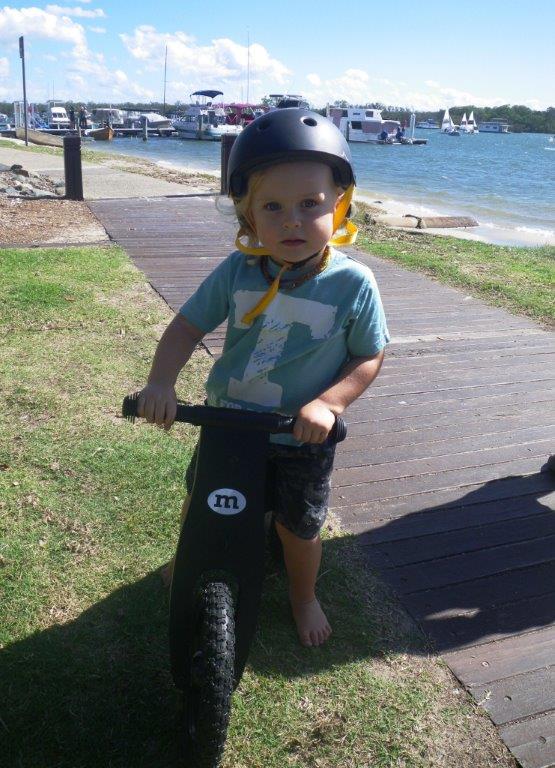 We’ve been staying on Queensland’s Sunshine Coast this weekend, visiting grandson Eli and his dad and mum.

We knew we were in another country the moment we left Brisbane airport and saw a White Ibis wandering through the garden outside.

Although the car rental girl tried to convince us that it would be impossible to drive on the highway without cruise control and that we should take advantage of their special discount on a larger car, we reached the Sunshine coast without incident, and hopefully without any speed camera fines. Negotiating the supermarket carpark proved somewhat tricky because first and reverse gears in the Hyundai turned out to be in pretty much the same place,  but with a bit of trial and error we and our shopping made it to our motel.

We headed over to Tomas and Courtenay’s house about 4pm, and were met by a very excited Eli. The balance bike we had ordered on the internet was waiting so my first job after the boy unpacked the box was to assemble it and supervise a test ride. I spent the next few hours playing hide-and-seek, catching a ball, playing with trucks and watching rather dangerous feats of climbing up shelving inside a wardrobe. After dinner I read a story and we said our goodbyes.

Felicity and I went for a run along the beach first thing in the morning, then after breakfast we headed back to Tom’s and loaded everyone into Courtenay’s car for a trip to Noosa river. There is a great playground there which kept Eli amused when he wasn’t riding his new bike or socialising with other kids.

By about 11.30 he was ready to have a sleep, so we dropped him at home and headed to the Peregian Beach surf club for a swim. A woman who saw us walking from the carpark in our togs said we must be very brave to swim at this time of year – the water was only 23º! The Tasman sea is as rough on this side as it ks on tne west coast of NZ, with a wicked undertow, so we were glad that the beach has lifesavers year round. The flagged area was only about 50m wide, and it was hard to stay in the same spot. We managed some good body-surfing and stopped because we were hungry rather than cold.

After a bit of a rest at the motel we returned to Tom’s and when they were ready the lot of us headed out to Courtenay’s mum’s house for an excellent BBQ. I had to spend more time running around their large lawn pushing the bike, which Eli had no hesitation steering over mounds and banks.

This morning we ate breakfast as soon as we woke up, and headed off early to spend the mlrning walking through Noosa National Park. I had hoped to see some wildlife, but the only thing we saw was a huge beetle on its back in the middle of the track. Even though we suspected it was a variety of cockroach,  Tom saved its life by picking it up with two sticks and turning it the right way up, off the track.

We enjoyed another swim while Eli had his midday nap. There are sand dunes all along the back lf the beach,  but instead of signs like in NZ that ask people to keep off because the vegetation is fragile, here they just say “Beware of snakes”.

This evening we ate dinner at the Pitchfork restaurant where Tom works. He would normally be head chef on a Sunday night, but his boss generously allowed him to have the weekend off while we were visiting. I barely had time to eat my food before Eli insisted that I follow him on a mission  to inspect the shopping centre.  This involved quite a bit of jumping off seats and walls, much to the amusement of other restaurant patrons.

Tomorrow morning we head back to Auckland, so it will be another six months or so before we see Eli again. It’s been a nice little holiday.