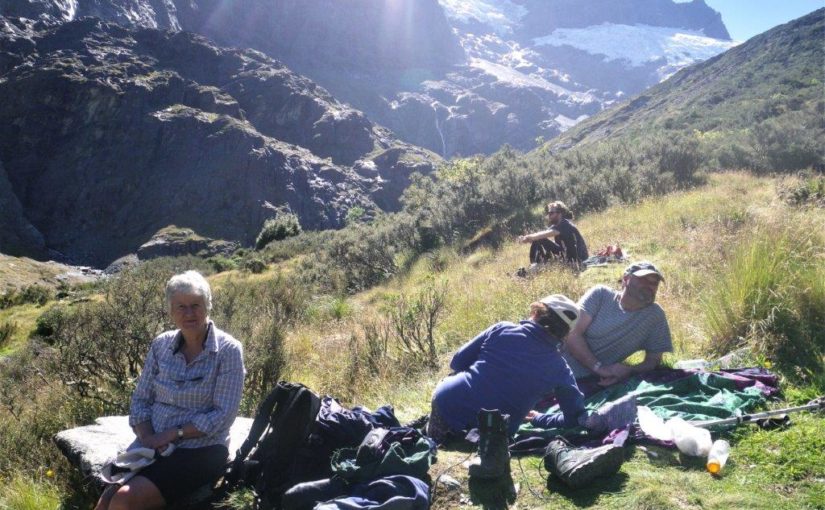 At the top of the Matukituki River, which runs into Lake Wanaka, there is a track up to a lookout where visitors can admire the Rob Roy Glacier. The local tourist information center claims it is “one of the best half-day walks in NZ”, and I reckon they are probably right.


On the trip down from Oxford we stopped for lunch at Lake Pukaki, where we had a magnificent view of Mt Cook. Afterwards we hiked a couple of km along the Alps 2 Ocean bike trail, and got hot enough to plunge into the lake afterwards, much to the amusement of the many Chinese tourists taking photographs of the scenery.

A couple of Felicity’s colleagues from the UK were staying at an Airbnb in Albert Town so we decided to park for the night in their driveway and cook them dinner. On the way to the supermarket at Twizel we passed a sign advertising “Alpine Salmon”, so we bought a large fillet to impress them with some local produce.

After breakfast the four of us piled into their hire car and drove around the bottom of Lake Wanaka, past the Treble Cone Ski Field and parked at the end of the road. I had been hopeful that the clear blue sky over Wanaka would extend to the mountains, but the Matukituki Valley had cloud cover at about 800 meters, hiding most of the mountain peaks on either side.

We started up the track at about 10.30am and met several disappointed hikers coming back who told us that they saw nothing but cloud. The track to the lookout crosses the river on a swing bridge then heads up through a narrow gorge into a side valley. We climbed through beech forest, following the Rob Roy Stream.

The valley began to get wider, and the vegetation became more alpine as we ascended. After a couple of hours we started to get glimpses of snow through the trees, and increasing amounts of blue sky. By the time we reached the lookout, the sky was almost completely clear of cloud, so we had a fantastic view of the glacier high above us.

I had pointed out a kea circling high above on the trip up, but just before we left one flew down and perched right next to some of our fellow tourists, so our companions got a good look at the beautiful bird. Altogether the track was about 10km, so long enough to make us feel happily tired but not exhausted.

We are now parked for the night on the side of the road over the Crown Range which leads to Queenstown. We are expecting a cold night, but if the weather stays fine we won’t mind.