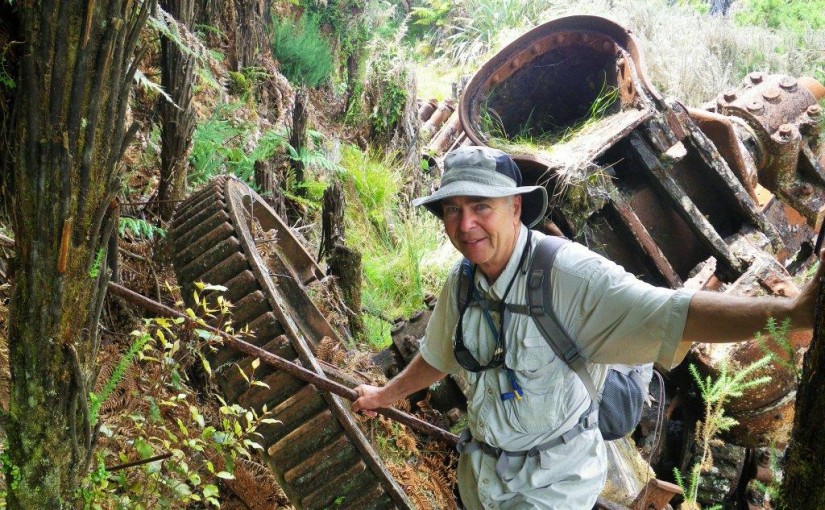 20 kilometres along a winding metal road out of Fox Glacier is Gillespies Beach. When Felicity was a teenager she and a friend rode all the way out and back on bikes, which is very impressive because this would be a big mission for me now. She has wanted to return ever since, so here we are.


There is a DOC campground at the end of the road, so we chose a spot, ate lunch, then set off down the beach to explore. This was once a prime gold mining area, so there are a few things to look at.

About 15 minutes from the car park is the remains of a huge gold dredge, now rusting away in a brackish pool behind the sand dunes. It was abandoned in 1932 after it stopped finding enough gold to make it economic. I was impressed to read that all the metal parts were bought here in small pieces by horse and cart.

Gillespies Beach is so remote, Google doesn’t even name it!

At the north end of the beach is the entrance to Gillespies Lagoon, which has a very attractive bridge just upstream. I am now wondering if we can find a place to get our kayaks in the water.

There is an old, benched pack track leading up the valley from here, and a few hundred metres up it is a tunnel cut through the cliff leading back out to the coast. When Felicity was here in the 1960s she went through and climbed down the cliff to the sea shore, but now DOC has it fenced off so we just looked out at the view.

The pack track continued along the coast, at the top of the cliffs. After about an hour of walking we arrived at Galway Beach, where there is a ladder down through a small gorge allowing access to sea level.

There is apparently a seal colony along the beach from the track, but after about ten minutes we came to a place where the cliff has recently collapsed into the sea. It might be possible to get around the bottom of the landslide at low tide, but when Felicity was checking out a way over it I looked up the high vertical cliff to a couple of huge boulders at the top hanging out over us, just waiting to fall. I immediately began to feel extremely unsafe, and so we both beat a hasty retreat. We have seen plenty of seals recently anyway.

It took almost two hours to get back to our van in the carpark. I was looking forward to a swim, but when we got to the beach we could see that even though the sea is quite calm, the waves were dumping dangerously down onto a boulder bank, so we made do with wading up to our knees and splashing water over ourselves. As each wave receeded hundreds of small stones and gravel smacked into our legs, which made me think how lucky we are to live near a benign beach like Long Bay on the east coast.

As we were eating dinner (yummy venison), we heard some loud screeching outside, and next thing a couple of kea swooped down and checked out the campsite. I wondered if someone has fed them and if they turn up every evening at meal time.

It rained a little bit overnight, but it looked quite clear after breakfast so we drove to the road bridge over Quinlin Creek and unpacked the kayaks. The creek looks natural and wild, but it has been dredged for gold since the late 19th century so it will have been modified considerably. We kept seeing old wooden piles sticking out of the water, the remnants of some long abandoned construction. Apparently there is still some mining going on somewhere in the area.

The creek wound its way through a maze of channels and swampland. Fortunately I had taken a good look at the map before we left because every channel looked similar. After a bit over an hour we came to the footbridge we had crossed the day before, and this seemed a good place to turn around. While we were there I saw a stoat running under the bridge, and Felicity had seen one at the campsite, so clearly there is not much pest control happening in this area.

We also saw thousands of ducks as we paddled along. Sometimes whole flocks took flight as we approached, but some of them used their second line of defence which is to duck underwater and swim randomly for about 20 metres before popping up somewhere else. Quite often this meant they popped up right beside the kayak which must have given them a nasty surprise!