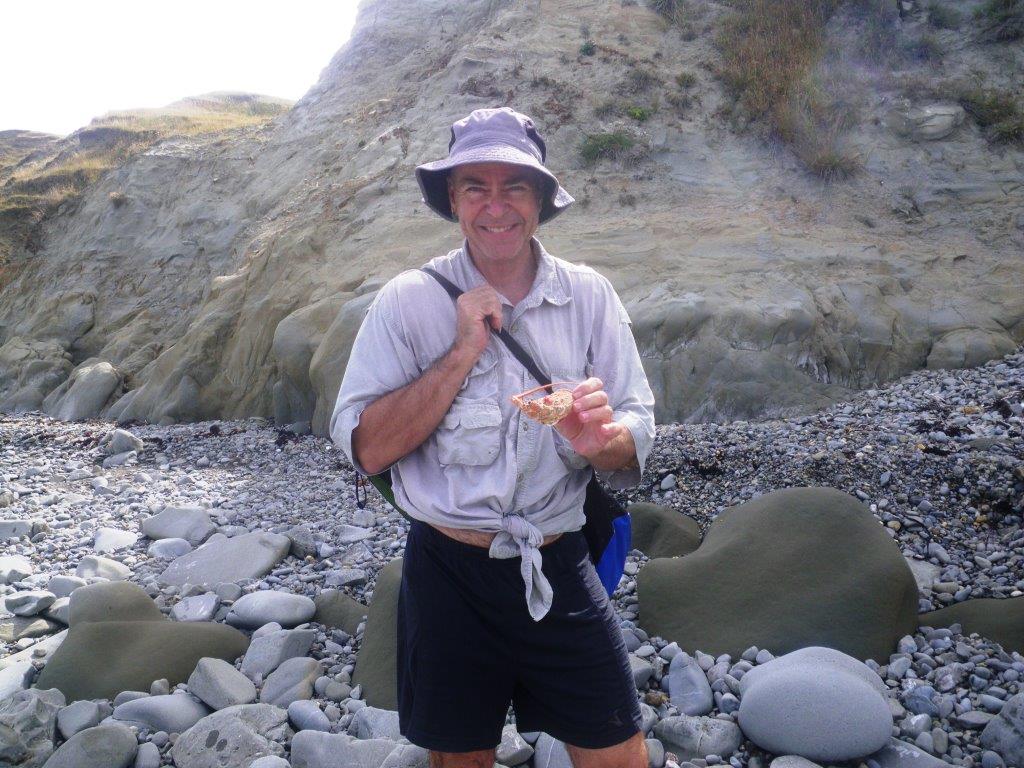 We spent our last night in the Napier/Hastings area parked at a free camping area on Clifton Beach.


As it was a Saturday morning, we visited a farmer’s market in Napier to see what local delicacies we could find. Besides fresh veges, we bought some stir-fry Muscovy duck (much leaner than regular duck), and some fig jam.

We then drove north past Bayview to the Eskdale Mountain Bike Park. I had hoped to ride in the newer Mill Block where the trails are supposedly more flowing, but it was closed for thinning the young pine trees, so I had to settle for the Tait Block were the first tracks were built.

Felicity still hadn’t recovered from our previous ride, and she wouldn’t have enjoyed the narrow, technical trails in any case, so I set off on my own, leaving her to go for a walk. I rode up to the top of the Zip trail, about 100m higher than the start,  which was a rather hot and sweaty exercise in the middle of the day. Then down the ElBerro, which was quite steep and fast, and over all too soon. I took a couple of easy trails running parallel to the road until I reached the gate at the Western side of the block, then headed back uphill via the Eskdrive and Switchback trail to the advanced grade Switches trail, which descended extremely rapidly to Forest Gump and Lower Pond.

Since all these tracks are in pine forest, the scenery doesn’t change much, and I didn’t feel inspired to climb up yet another hill, so I headed back to the van via the ‘easy’ Sand Pit, Nemo, and Cattle Flat trails.

I was very ready for lunch by the time I met up with Felicity at the car park.

Our next stop was at the Mission Vineyard, where we bought a couple of bottles from NZ’s oldest winemaker. The property is very flash – we drove down an avenue lined with plane trees, passed a function centre where a bride in her wedding dress was having photos taken, and parked in front of a magnificent wooden building that must have been the original Catholic mission. Now it has a fancy restaraunt and a retail outlet for the vineyard. We briefly contemplated buying local Hawkes Bay wine, but ended up buying Pinot Noir and Syrah from their Malborough estate because that is what we like best.

We had hoped to spend the night at a camp on the edge of the Tukituki river, but when we arrived we found signs saying it was closed due to flooding danger. This seemed rather unlikely at this time of year, and we were told later that it is because there has been trouble with hoons lighting fires, smashing bottles and robbing campers but the council doesn’t want to scare the tourists.

We ended up in a lovely spot right on Clifton beach, where we could listen to the waves breaking from our bed. The swimming is not that great because of the stony shore, and I had to resist body surfing on the waves because the beach sloped upwards very quickly and I was worried about being dumped on the stones. It was nice to cool off though.

On Sunday morning we drove to the top of Te Mata Peak. I was impressed by how many people we saw running and biking up the steep hill. We thought about walking down one of the many tracks, but decided that despite the fine views the immediate scenery wasn’t interesting enough.

After a quick stop at Havelock North to refuel the van and the cupboards, we set off to visit the Maraetotara Falls. This was once a small hydro-electric power station, but only the empty concrete generator building and some concrete pipes remain. There is a pleasant track along the stream and we enjoyed a short hike.

Almost as soon as we began climbing into the hills south of the fertile river plains, it became obvious how little rainfall this part of the country gets compared to the rest. The grass is already brown, and the metal roads are dry and dusty. Most of the trees have been cut down apart from a few small areas in the valleys beside streams, so the countryside is not particularly attractive. We’ve been seeing a lot more sheep than in wetter areas where dairy cows can thrive.

We stopped for lunch and a swim at Ocean Beach, just south of Cape Kidnappers. We were both surprised to find that the water was several degrees colder than just a few kilometres north. The surf was quite high, and there was a strong sideways rip, so we were glad there was a surf patrol ready to rescue us if things went wrong. The flagged area was only about 50m wide, so it must be a fairly dangerous area.

About mid-afternoon, at the end of a long no-exit road, we came to Kairakau where we found another attractive grassy area to park right on the beach. The tide was nearly out by this time and we could see an exposed reef at the south end of the beach, so we unpacked our snorkelling gear and walked down.

The underwater environment is a lot healthier than around Auckland, which is often almost a desert because of the kina eating all the seaweed. The kina population is normally controlled by snapper, but when humans catch too many the natural balance is upset. This reef was thick with all kinds of weed, and it was like floating over a luxuriant forest.

Unfortunately though, the wind had stirred up sediment in the water and we could only see a metre or so at best. I spotted one school of sprats, and three or for other smallish fish, but there wasn’t much other life to be seen. We found a net set in one big pool and swam all the way along it, but it didn’t seem to have caught anything.

Felicity had already reached the shore, and I was less than ten metres behind her when I made a discovery that was the highlight of my dive: a crayfish hiding under a rock. I’ve seen them underwater before when shown by others, but this was the first time I’ve found one myself. Sadly, it wasn’t anywhere near legal size, so I didn’t molest it in any way, and just called Felicity to come and see.

As we were walking back I found a much smaller crayfish shell on the beach which suggests that other people are not as law-abiding as me!