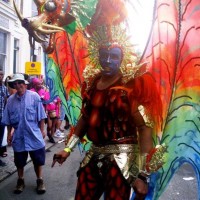 Ever since I realised we were going to be in London for this famous carnival I’ve been looking forward to today. Felicity has been to a real carnival in Trinadad, so she was excited too. It turned out to be quite different than what either of us expected.

We squeezed on to a very crowded tube train soon after 11 AM, which disgorged most of its passengers at the Notting Hill station. The crowds and us flowed up the stairs and down fenced off streets towards the area where the parade was circulating.

We noticed that many of the houses had temporary plywood fences blocking off their front yards, presumably to prevent them being used as toilets. There were a few clusters of port-a-loos, the first I have seen in London.

We heard the parade long before we saw anything. Both of us were expecting to see trucks with steel bands playing live music, but that’s not how they do it in London.

The parade consisted of huge articulated trucks with massive diesel generators pumping incredibly loud drum & bass ‘music’ through enormous banks of speakers driven by weapons-grade amplifiers. Some of them must have been producing 130 decibels or more – definitely well into hearing damage territory. The base notes made our internal organs vibrate uncomfortably and our teeth chatter from several hundred metres. I saw that most of the police on duty were wearing ear-plugs.

There were a couple of steel bands, which are normally pretty loud, but there was no way they would have been able to compete, so their equipment was packed away. A few of the side streets had stationary sound systems set up, with an empty space for 100 metres on either side because nobody could handle being in the direct blast. The concept of noise control by local councils as a public health and safety issue is clearly not applicable here.

All the trucks were covered in advertising, and many of the food stalls seemed to be promoting West Indian restaurants. We were particularly amused by a van advertising gold and diamond teeth! At one window overlooking the street, the pope looked on benevolently, accompanied by a dancing puppet.

I smelled the occasional whiff of marijuana on the breeze, but this was a party primarily fuelled by alcohol,  which was available in vast quantities. Because the trucks were so slow, and the streets were so congested, there wasn’t much dancing; most of the girls just shuffled along taking pictures on their smartphones, or texting their friends. I was glad we chose to go early in the day, I suspect it will be a bit ugly this evening when everyone is drunk.

There was the occasional creative costume, but most of the feather head-dresses looked like they had been bought for £1.99 from the local novelty emporium. There was a fair bit of naked female flesh on display, which is never a bad thing in my opinion, but nothing you wouldn’t see down at Long Bay beach. Felicity was taking the photos, which probably explains why most of the naked flesh in them seems to be male (OK, they did also have the most interesting costumes).

Felicity was keen to try some Caribbean food, so we purchased a lamb pattie (spicy mince in pastry), and a plate of rice & peas (actually beans), some jerked bbq chicken, and some goat curry. I suspect the goat must have met with a nasty accident, because it was filled with tiny splinters of bone. Genuine jerked chicken is supposed to be smoked for several days according to Felicity, but I’m sure this had its jerkedness painted on this morning. It wasn’t a bad meal by any means, but it certainly wouldn’t have won any prizes.

We ate in a small park under a shady tree, surrounded by a sea of empty beer cans, discarded food containers and other litter. I left our plate next to the single overflowing rubbish bin, but I might as well have just chucked it on the ground where we sat.

After following the parade for kilometre or so, we spotted a path by a canal, and just a little way down it a bridge leading out of the carnival area. After only two hours of ‘celebrating’ all I wanted was to head home for a cup of tea and a lie down! I must be getting old.