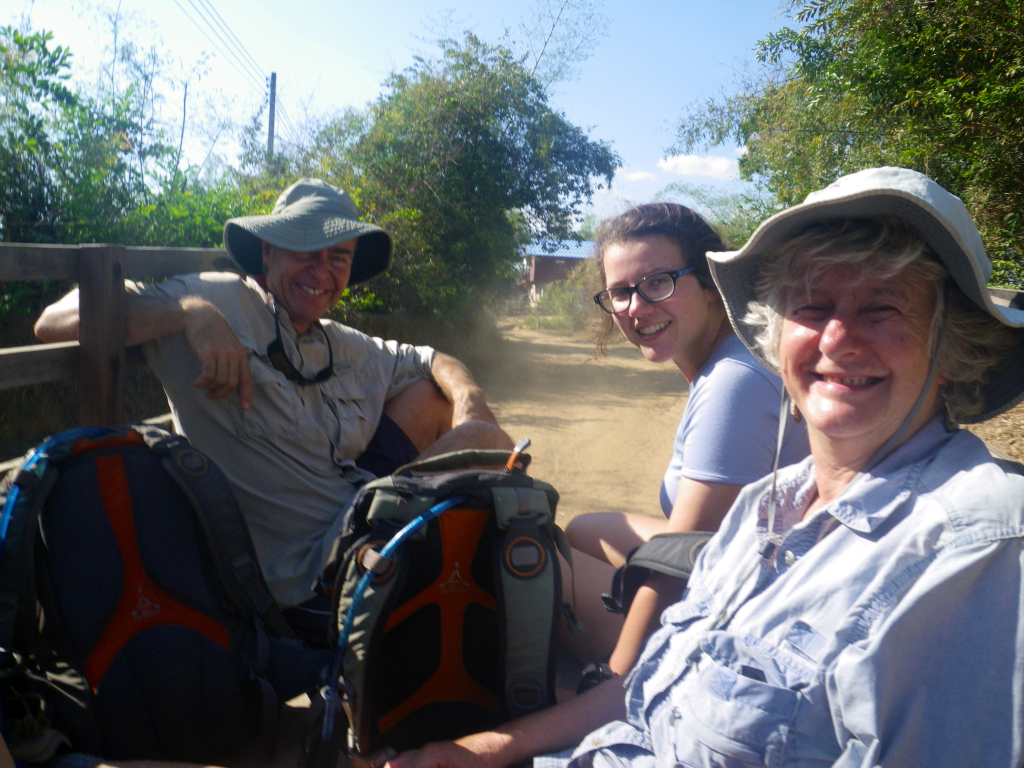 For our final adventure in Lao, we travelled six hours south of the capital to the town of Thakhek.

We could have gone all the way from Vang Vieng in one go, but I’m glad we decided to stop overnight in Vientiane.  We walked around the city for a couple of hours, ending up on the bank of the Mekong, watching the sun setting over Thailand on the far side of the river. We also enjoyed a BBQ dinner at an outdoor restaurant where we could watch life passing by. For once the food being cooked seemed to be mostly meat rather than fat.

In the morning we realised we had made a mistake by buying our bus ticket at the hotel instead of getting ourselves to the bus station. It included a transfer by songtheiw which arrived about 40 mins late. This meant that when we got to our bus, all the seats were taken – Judith ended up perched on top of someone’s luggage, and I was given a small plastic stool to sit in the aisle,  with my head at the level of people’s knees. Directly above my head, a very loudspeaker began blasting Lao pop music. Further up the bus, a couple of other western women began to complain, and when I saw them getting off I thought “bugger this”, and followed them. The  bus crew reluctantly extracted our packs from the hold, and we followed the women to a local bus which was offered as an alternative. It turned out to be much slower, and didn’t leave for another hour or so, but at least we all got proper seats by the window, and up near the front.

Early next morning, we met up with our guide and were taken to the start of an easy 14km hike down a dirt road, then along a jungle trail  into the hills. We picnicked beside a small river, where I saw a  small frog, just about the only wildlife not in a market on its way to someone’s dinner. Another hour or so brought us to a village where we watched a woman distilling LaoLao rice whiskey, then loaded ourselves on to a Chinese made tractor for the final few kilometres to where we camped.

The small lagoon we pitched our tents beside was filled with the most clear turquoise water that I’ve ever seen, and it was very refreshing to swim and dive into after our sweaty walk. Before we had finished eating, the guide had retired for the night, and I was a bit surprised that our food supply was left lying about in the open. Just to be on the safe side, I packed away the fruit and eggs for breakfast, but left a  raw chicken where he had hung it in a plastic bag on the fence because there was blood dripping out of it. Surprise, surprise, it was gone in the morning. The guide claimed a buffalo ate it, but we thought one of the dogs hanging around the camp was a more likely culprit.

Next morning Felicity and I were up at first light due to the very thin sleeping pads which made staying in bed longer than necessary an unattractive proposition. When breakfast was over and the tents packed away, a truck took us to a nearby river where we transferred into inflatable kayaks and paddled off. I was a bit disappointed that there were no rapids, but it was very pleasant cruising along. It was very different to our previous journey, because the area was quite populated and we were mostly passing people’s gardens and farms. We saw a herd of water buffalo escaping the heat by standing in the river with only their nostrils showing, almost like hippos.

When we stopped for lunch on a sandy beach and had a swim, I noticed freshwater mussel shells on the bank, so I dug around until I had harvested a couple of dozen,  thinking that our lunch would be lacking the planned chicken. The English couple seemed impressed by my intrepidness, but didn’t try them, and spent the next 24 hours waiting for me to be struck down with food poisoning. I’m pleased to report that I survived.

About 500 metres from the end of the trip, the guide told us that there would be one big rapid, and that we would unpack our gear and carry it past, checking out what we would face on the way. It turned out to be a one metre waterfall, but fairly straightforward with nothing much to get caught on or hit. It was still a welcome adrenaline hit when we flew over without incident. The last few metres to the landing involved another smaller rapid through a narrow chute that I couldn’t see until I was in it. Judith and I got caught on a rock and the boat turned sideways, but instead of flipping over as I feared, it just filled with water. I managed to push us off, just as the guide climbed out over the rocks intending to rescue us. I saw a momentary look of terror on his face as we shot towards him at high speed,  but he managed to leap out of our way in the nick of time.

We took the truck back to our hotel in Thakhek where we enjoyed a hot shower and a comfortable bed. Next morning we left at 7.30 AM in a mini van for a long drive out of the Mekong valley into the hills towards Vietnam.  We stopped at the top of a pass so that the driver could make an offering at a small roadside shrine with a piece of rock in it, presumably representing the local mountain god. Judging by the other offerings he/she seemed to be keen on orange juice in plastic containers, and cigarettes. I felt safer on the winding road afterwards, seems like cheap insurance to me.

After ordering lunch at a local restaurant, we hiked through the jungle for an hour or so to see a waterfall. Felicity,  Judith and I enjoyed a swim in a big rock pool, and at the guide’s suggestion stood directly under the falling water for a shoulder massage. On the way back down, the guide saw a red snake, but it escaped before any of us saw it. When we told him we were disappointed,  he said there were a couple up at the falls as well, but he hadn’t bothered to point them out, perhaps because he thought we would be nervous. I mentally halved his tip at this point.

Back at the restaurant, our lunch was ready, and very welcome after our exertions. Then another 45 mins in the van to the start of the Kong Lor cave where we were issued life jackets and loaded into several motorised canoes. The cave is huge, with a large river running straight out from under a high cliff. In places it is 80 metres wide and the lowest point would be 4 -5 metres. The length is over 7 kilometres, and the main access to the village on the other side is by boat. We were in the boat over half an hour each way, although we had to get out several times and walk while the boatmen pulled the canoe over small rapids.

One section of the cave has a footpath a couple of hundred metres long past spectacular stalactites and stalagmites, lit quite tastefully with coloured electric lights. This cave was definitely one of the highlights of our trip, and well worth the long drive to see it.

Yesterday we spent on a VIP bus travelling back to Vientiane,  from where we fly out to Bangkok tomorrow on our way home. The trip was fast and comfortable, marred only by the entertainment. I’ve heard enough Lao pop music to last me a lifetime!

Early this morning, Felicity and I headed out before sunrise for a run along the Mekong. The temperature before the sun comes up drops to the low 20s, and I was amused to see the locals exercising in warm jackets and gloves.

The women are off shopping while I sit on our hotel balcony writing this. It’s been a great trip, but I’m looking forward to getting home to my bike and our comfortable bed.

2 thoughts on “Thakhek and Konglor Cave”