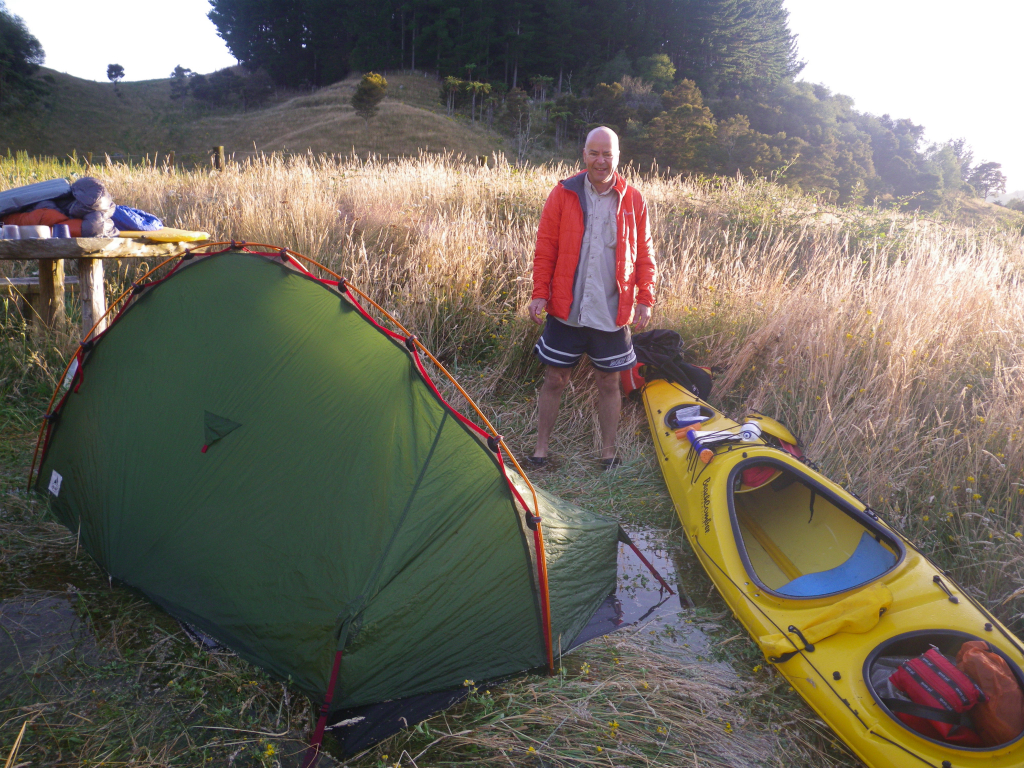 When we looked at the weather map, the central North Island looked like the place to be over Anniversary weekend, so we’ve been exploring one of the hydro lakes on the Waikato river.

We drove down to the Ohakuri Power station hoping we might find people camping, but threatening signs on the attractive picnic area near the boat ramp were doing their job. We talked to a couple launching their fizz boat, and they told us that there is freedom camping at the end of a metal road we had passed on our right. I was glad that my vehicle is high off the ground because the road is pretty rough, I guess it deters the camper-vans.

The area was surprisingly empty – one guy in a bus and a couple of families with water-skiing boats. We parked beside the families in the hope that the car would still be there when we returned, and launched our kayaks with our tent and dinner aboard. The peaceful calm of the lake was shattered at regular intervals by the skiiers, but I got to quite enjoy turning at the last possible moment to bob over the wake at right angles to avoid tipping out.

We headed up the northern arm towards where the Whirinaki stream enters the lake. After a while the river narrows down to a gorge, with high sides and bush right down to the water’s edge. Power boats are restricted to 5 knots through this section, so we didn’t have to worry about wake. Then the lake opened out again and farms re-appeared.

We had been told there was a camping area just beyond the first bridge, but when we paddled under it we couldn’t see anything likely. Since it was late afternoon by this time we decided to backtrack and find a spot on the bank. After checking out one possibility that was already occupied, and deciding that another would be hard to pull the kayaks up, we settled on a grassy bank just outside a farmer’s field.

An old macrocapa picnic table gave us a civilised place to cook and eat our dinner, and when the sun slipped behind the western hills we errected our new tent. The grass was a little bit damp underfoot, but I assumed it must have been water draining into the river. The bank sloped from 300mm above the lake to about 200mm near the edge, so I figured any surface water should drain quickly away. I am aware that camping just above water level is a risk, but I knew high tides wouldn’t be an issue, and there had been no significant rain for weeks, so no worries,  I thought.

Probably just about this time, it seems the engineers at the Ohakuri power station turned off the dam and went home for the night. I guess without all us Aucklanders at home using electricity the demand drops.  As we snuggled into our sleeping bags, the lake began to rise.

Some time around dawn, Felicity went out of the tent for a pee, and when she came back she remarked that she had been walking in a puddle. By the time we got up for breakfast, the water level outside the bottom end of our tent was ankle-deep! This was the first test of our Vaude light-weight mountaineering tent, and I am impressed to report that almost no water found its way inside to soak into our sleeping bags. I guess all the seams are still nice and tight. We spread our gear in the sun while we ate breakfast, and things were mostly dry when the time came to pack up.

We paddled about an hour and a half up river before turning back. The section past the second road bridge was a forest of willows and water-meadows with lots of meandering channels to get lost in. We saw thousands of ducks, as well as geese, swans, shags and other water-birds. Unfortunately the water in this part of the lake is rather green and stinky, and there is heaps of oxygen-weed (with attractive white flowers at the moment) that made the going tough at times. There are also many clumps of water lillies which are probably another invasive pest, but it has even nicer yellow flowers to brighten up the environment.

When we got back to the main section of the lake we stopped for lunch at a small beach. The water there was clean enough to swim in, but I still feel sorry for the people in south Auckland who have to drink it! With a brief stop at the car to pick up a second night’s dinner, we continued up the Waikato towards Orakei Korako where we planed to re-visit the Akatarewa Stream next door to the Rotota Sun Club. You can pay $140 to visit this fascinating place by jet-boat, but it’s more fun finding it  independantly. A narrow passage through the rock bank with a knee deep warm stream winds its way into the bush until you come to a hot waterfall and some  deep pools for soaking.

Not long after leaving the  vehicle we found a couple of tiny islands, and when we discovered just enough flat ground to pitch a tent we decided we had done enough kayaking for one day. The door of our tent opened onto the edge of a cliff, so we knew we would have to take care when getting up in the night, but at least we were 3 metres above the lake! We both enjoyed watching and hearing abundant bird life all around us.

In the morning, we were able to pack up quickly after breakfast, and we were off up river while it was still cool. A guy at the camp had told us about two bathtubs on the side of the river above Orakei Korako so we decided to check them out and return to the stream for lunch. The Tutuka tubs (English translation: “Warning, dangerous rocks above bath tubs”) turned out to be a bit derelict,  but the creek was dammed high enough to form a shallow pool. It was lovely and warm, so we stripped off our clothes and lay down for a relaxing rest.

The trip back downriver past the steaming cliffs and bubbling springs near Orakei Korako didn’t take long. As we passed the sun club, a very tanned naked man on the lawn watched us. I couldn’t help thinking it’s bad enough getting skin cancers cut out of arms and legs! We walked up through the bush to the waterfall, where we enjoyed a thorough massage and another quick soak, then started down the stream towards the chasm. We had timed our visit perfectly, a jetboat’s load of tourists passed us on our way out.

It took about an hour and a half to get back to the car, and in no time we were packed up and on our way home. My legs have had a good rest this weekend, but my arms are tired.