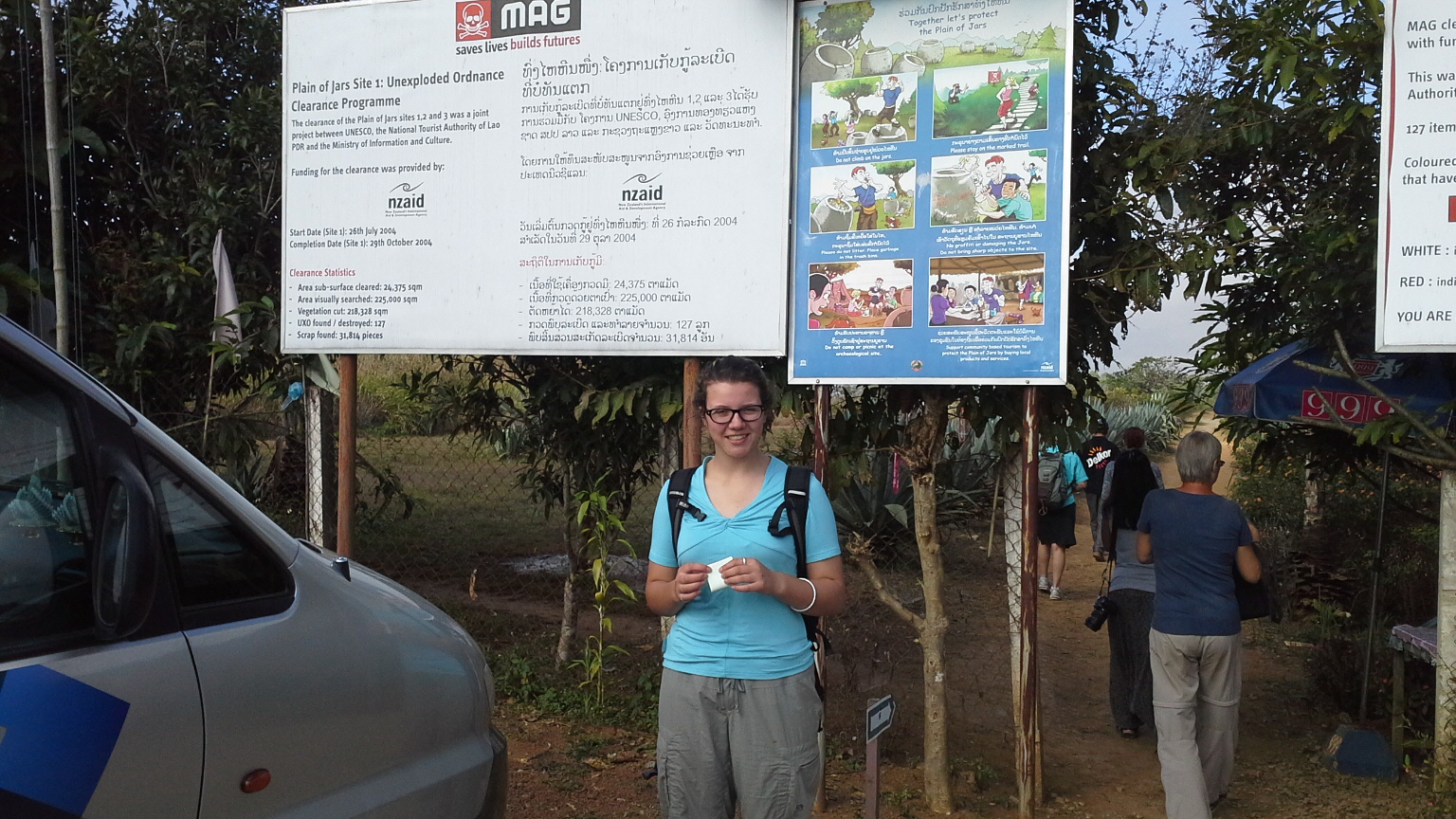 For our final adventure in the northern Lao highlands, we based ourselves in the town of Phonsavan. The huge stone jars that we went to see are, according to local legend, left by a race of giants who used them to brew rice wine.

The more conventional explanation is that they were made by a long lost civilisation between 500 BC and 200 AD. Whatever the origin, they were very impressive.

The first thing we were told by our guide was to observe the concrete markers on the ground indicating the areas that had been cleared of unexploded bombs. I told him that I’d be walking just behind him to be on the safe side. The Ho Chi Minh trail ran right through this town, and as a result it was one of the most heavily bombed areas in the country. I was surprised and pleased to see the clearance programme is being financed by our government’s NZAID organisation.

Many of the jars have been damaged, and we could see bomb craters and Viet Cong trenches everywhere. There also used to be many smaller jars which have been removed by locals for use as storage or house foundations. Archaeologists who have examined the jars found remains of cremated bodies, glass beads and other burial objects.

At the first site we looked at a cave with a natural chimney where cremations took place. We visited three sites altogether; there are many more but most are still to dangerous for tourists. This is not a place where you step of the path behind a tree for a pee!

When the official tour was finished, we paid the guide a bit extra to take us to “bomb village” which was a very good move, several families here melt down scrap aluminium and cast them into spoons. Judith and Felicity both had a turn. In the past, the locals used to search through the jungle for metal, but so many got killed that the authorities banned this, and now their supply comes from the bomb clearance teams.

We also watched local women weaving intricate designs on hand looms, and visited a house that used steel bomb casings for foundations. We stopped briefly to see a Russian tank, but because scrap steel is now fairly valuable only the huge hull remains in place, everything else having been salvaged.

Our final stop was at a “whisky village”, mainly so the driver could purchase a bottle. A litre is the same price as beer, only much stronger. I was impressed by the low-tech still – a 44gal drum over a fire cooks the fermented rice mash, and the steam condenses on the underside of a wok filled with cold water. A scoop sits under the centre to catch the drops, which run down a pipe to a plastic bottle outside the drum. I tried one swig, only to be told that you have to always have two so that both your legs stagger evenly!

After dinner we went to see a movie about the CIA’s secret Long Chen airbase, which is in a valley not far from Phonsavan. In the late 60s this was the busiest airport in the world, with hundreds of flights a day delivering war material, conducting bombing raids ans smuggling heroin. Because the American military could not operate in Lao, they paid mercenaries from the Hmong tribe to fly planes and conduct ground fighting.

Many young Hmong men learned to fly jets before they drove a car. So many were killed that boys as young as 14 were pressed into service. Decades after the war, an American journalist discovered a huge refugee camp of women and children. With all the fighting age men out of action, the Hmong turned to Opium cultivation to raise cash for food.

The three of us have certainly learned a lot of history in the last couple of weeks.

Today we took a bus south out of the mountains. When we boarded, we were pleased to be on a VIP bus because it looked quite comfortable. The downside turned out to be that it had extremely loud Lao pop music videos for entertainment, which soon started driving us all crazy. Fortunately they turned it off when Felicity complained at our lunch stop.

One thought on “Plain of Jars”