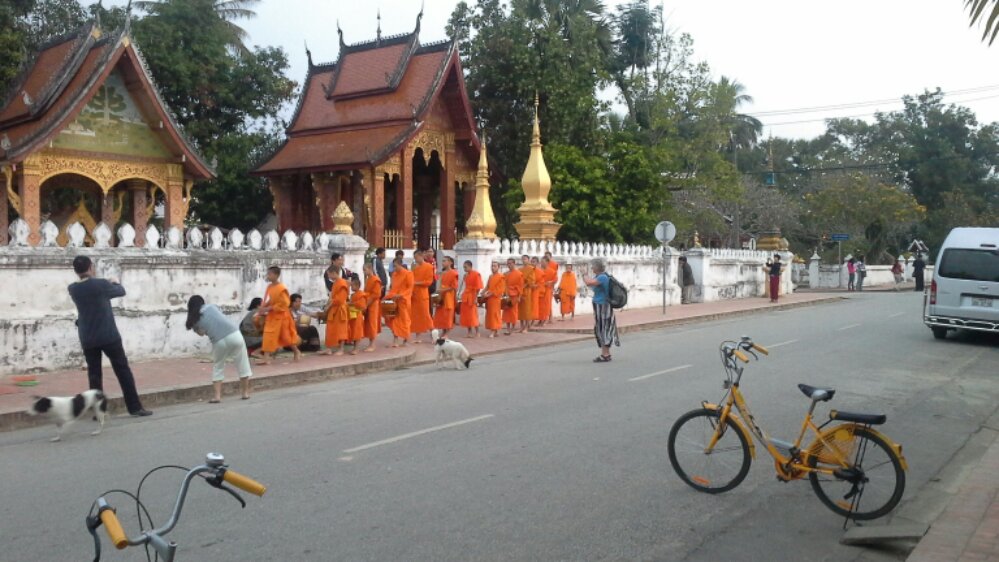 I was woken about 4am this morning by the beating of the big drum at our local wat (temple). Presumably the monks have to chant or meditate for an hour or so before they start their procession through the town; I went back to sleep.

When Felicity woke us again at 5am I decided to go out to watch the ceremony.

We had to run a gauntlet of women with baskets selling packets of food “for the monks”, but soon came to a spot outside one of the main wats where our guest house receptionist had advised us to watch. Local people were sitting (or kneeling if they were women) in a line on the other side of the road, each with a sash worn diagonally across their left shoulder. Our side of the road was soon crowded with tourists.

After quite a long wait, the first group of monks appeared, walking barefoot with their begging bowls and accepting small gifts from each local. There were also a small group of boys carrying baskets, walking with one foot on the footpath and one on the road, beside the lead monks. I figured that when the monk’s bowls became full they must pass on some of the food so that the giver would still receive the spiritual merit.

There were a couple of hundred monks altogether,  which means quite a high proportion of the young men in this society must take the vows. Some looked to be as young as 6 or 7 years old. When the last monk had passed,  we walked back to the market and ate a Lao style crepe for breakfast.

After a trip back to the guest house to ablute and prepare our gear for the day, we negotiated with a tuk-tuk driver to take us to see the famous Pak Ou caves about an hour up the Mekong. It soon became obvious that the driver wasn’t keen, because he found us a small truck with seats in the back instead. This took us to a transport depot where there were further negotiations and phone calls before we finally headed out of town. Soon we stopped yet again,  behind another taxi truck which we realised had broken down. Our driver told us it was his brother and that he wanted to take his 3 Thai and 1 German tourists in our vehicle,  so they piled in and we set off again, a bit slower than before.

When we arrived at Pak Ou, the truck parked and we walked through the village and down to the riverbank, where we hired a motorised canoe to take us across the Mekong to the caves. Inside there were thousands of Buddhas, some obviously very ancient, but others of gold coloured plastic which were of more recent origin. In the past, the Laotian royal family used to be patrons of this holy site, but since the communist revolution in the 1970s the caves maintenance has been dependant on foreign aid programs,and now tourism.

When we crossed the river again and found our driver, he convinced us to go on another tour to a waterfall, but while I was sitting waiting for lunch I realised that the headache I had started to get was making me feel miserable,  and I couldn’t eat my baguette when it arrived. So I got dropped off at the guest house where I’ve been resting all afternoon. I hope this isn’t going to be a repeat of our Thailand trip in July when I was ill most of the time!

One thought on “Pak Ou Caves”