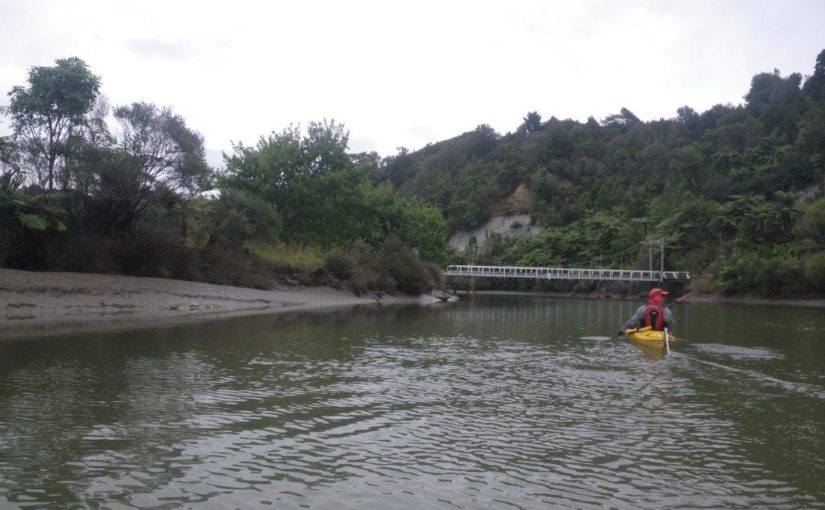 We have just been away for two weeks, traveling around the province of Taranaki. I decided to make it a holiday, and not devote an hour or so each day to writing this blog.

But Felicity sent me the photos below (all of the first day!), so I might as well share them with you.

We spent the first night of our trip in the carpark at Mangapohue Natural Bridge. This gave us an opportunity to walk back into the gorge at night to admire the glow-worms.

At Tongaporutu we kayaked upstream for an hour or so admiring the mostly native bush. We didn’t admire all the wild goats though.

In the evening, when the tide was low, we walked around the coast to see the spectacular “Three Sisters” rock formations. These rock stacks on the beach are constantly getting worn down by the wind and sea, but erosion of softer sections of the cliff create new stacks. There were lots of sea caves to wade through.

The subsequent days were almost as busy as this one, and included a climb up Mt Taranaki to the Lizard at 2,314 metres. The final 200 metres to the summit is climbing over rock boulders, and Felicity was concerned about being able to get down. As we had already enjoyed fantastic views across to Ruapehu and Tongariro and the clouds were starting to roll in, we decided to call it a day and turn back. As we started at 946 metres it was quite a climb.

Some of the other highlights of our trip were seeing lots of saddlebacks and a stream pool crowded with native fish at the Rotokare Scenic Reserve, and identifying the native passion-fruit or kohia. At Puketi Gardens, we learned about the feathery clematis (puawhananga) seed pods which remain once the flower petals fall.

It has been a relaxing two weeks.

4 thoughts on “Journey to Taranaki”