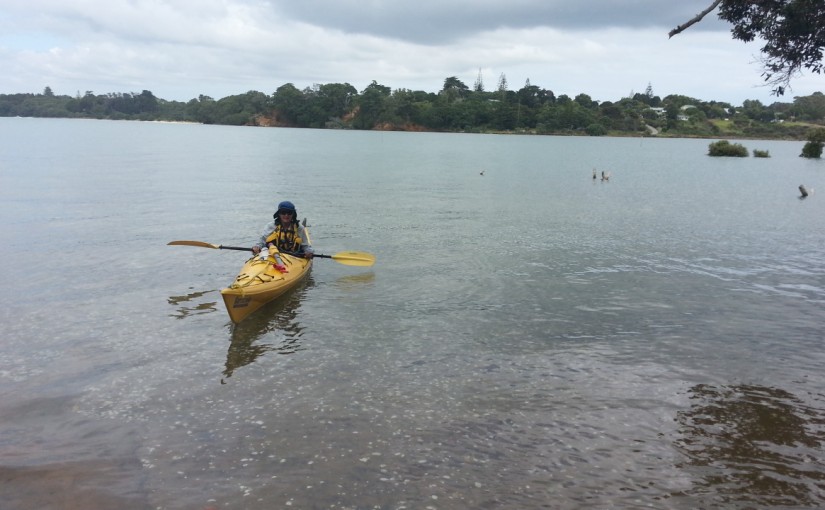 Even though we knew there was rain forecast this weekend we decided to spend a couple of nights at Awhitu Regional Park and go for a kayak.


Leaving home at 3.30pm on a Friday and heading south is a very bad idea, as we have discovered in the past. It took us over an hour to get to the city, which meant we got to join the rush-hour traffic crawling down the motorway all the way to the turn-off at Drury. The final 60 km was reasonably fast, but it was still after 6.30 before we rolled up at the campsite.

The last time we stayed here was when Judith was a preschooler, sometime back in the 20th century, so the park has changed radically since then. What I remember as small areas of planted seedlings are now mature trees providing much appreciated shade. I was hanging out for coffee so we didn’t put much effort into finding the perfect spot, but we were far enough away from a big group of children to be relatively peaceful.

Apart from the occasional distant roar of jets taking off across the harbour at Mangare we were undisturbed, and it was after 8.00am before we woke up and burst into action. An after breakfast walk around the coast showed us that there wasn’t anywhere practical in the park to launch the kayaks, but we found a good boat ramp just to the north. On our way there we had been looking across acres of mudflats, but in less than an hour the tide rolled in and we could see it was time to get on the water.

As we paddled out from the creek where the ramp is situated we found ourselves heading into a bit of a breeze and decided not to go too far in case the water got choppy when the tide began going out again. Around a small headland we followed a sand bar inhabited by hundreds of oyster-catchers and dotterels, then headed through mangroves into a small river. At regular intervals big mullet jumped half a metre out of the water and splashed back in, making us wonder what was chasing them.

At the top of the northern channel we chased a shag for a while. It kept diving under the water and re-surfacing a few metres further away, until finally it realised the tactic wasn’t fooling us and flapped onto a mangrove branch and glared at us.

The southern branch of the river went a lot further, but we eventually came to a fallen tree that I could just fit under by leaning right backwards and putting up with my nose grating past the trunk. I was hoping the tide was completely full because another couple of millimetres would have forced me to wait. Felicity couldn’t bend backwards far enough, and nearly got stuck trying to bend forwards, so I paddled up the last little bit to a bridge over the highway on my own.

Back out on the harbour we found a nice looking beach, but as I was nervous about the wind against an outgoing tide we decided to get to shelter before stopping for lunch. As we passed the sandspit, the birds weren’t impressed by Felicity paddling close to get a photo.

There was a suitable beach just downstream of the ramp so we enjoyed a swim then sat on a log in the sun to eat. There were a couple of motor-boats zooming about at high speed, but fortunately they were elsewhere when we set off again. We continued past the landing and paddled as far as we could get up the creek before returning to the van.

At the park we decided that the parking area offered much nicer views than the official camping area, so we joined another couple of self-contained vans. It had started to rain by this time, which forced us to close most of our windows, turning the van into a bit of a sauna for the duration of the evening. To make matters worse, our dinner involved a particularly hot chilli which made us both cough and wheeze while it was cooking, and sweat like pigs during the consumption.

The morning started with a spectacular sunrise over the Manukau Harbour – the photo was taken through the rather dirty window of the van which doesn’t really do it justice. After breakfast we drove out to the end of the road to see the lighthouse at Manukau Heads. This is actually a re-construction for tourists, after the original site threatened to erode into the Tasman.

It was great to see Whatipu and the Waitakere Ranges so close across the harbour. We also had a good view of Auckland city in the distance to the north-east (on the horizon behind Felicity in the photos).

On the way home we made a detour to Glenbrook Beach, just past the steel mill. The tide was just high enough for us to enjoy a swim before lunch. This beach is at the entrance to the Taihiki River, which is now added to our list of places we want to kayak in the future.

2 thoughts on “Awhitu and Manukau Heads”