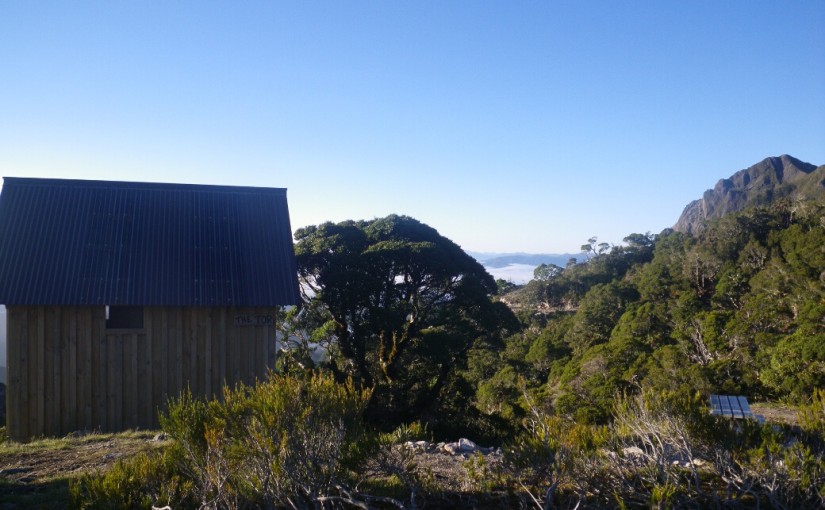 In the morning, the valley below the hut was filled with cloud, but up where we were the sun was shining brightly.


The bike path wound its way down the hill past the lake, and continued down into the valley until we came to some wooden steps on the very steepest part where riders are going to have to carry their bikes for a few minutes. At this point we were directed onto an old tramping route running straight up a spur, because this is as far as bikes can be ridden for now.

All the while we could still see the hut in the distance getting smaller and smaller across the valley behind us. Even in the photo of me sitting without a pack it appears as a tiny speck directly above my head. You can also just see the path winding down the hill.

We stopped for lunch at the top of the hill, then continued down a spur into the Stern Valley. Although this is supposedly only suitable for ‘experienced trampers’, the route was well marked, and fairly clear thanks to one of the track workers who had been through with a chainsaw recently. We learned from the hut book that some people have carried bikes over this route, but from all accounts, and my own observation, this is A VERY BAD IDEA!

At the hut, we selected bunks in the main building, and went for a quick dip in Stern Creek. I predict this hut will disappear down river in a big flood one day, despite the efforts to re-enforce the bank behind it. There is a pile of huge boulders with numbers on them, connected by steel rope attached to metal rods drilled into each stone, something I have not seen before.

About seven o’clock two track workers cam home and started up their generator. This meant we had not only lights, but satellite TV! It was useful to see a weather forecast and learn that another band of rain was expected next afternoon.

One of the guys told us that he had been a coal miner in Westport until he got laid off, but that he much prefers track building. He began cooking himself and his mate a roast dinner, “because it’s Sunday”, in a full size gas oven. He told us that the Trust supplies them with plenty of food, and that he eats better at work than when he’s home.