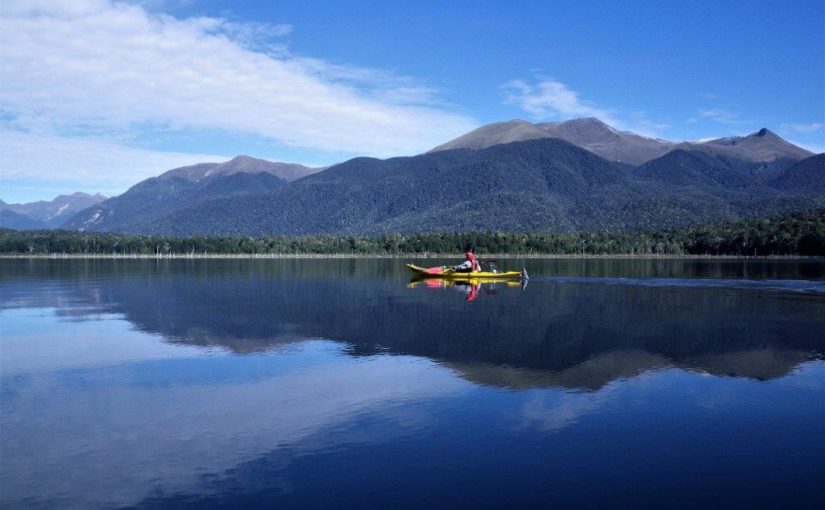 Lake Monowai provided us with perfect kayaking conditions today – flat, glassy water with beautiful views of the Fiordland mountains. It was created to supply one of the South Islands first hydro-electric power stations in 1925.

Apparently there was an attempt to raise the lake levels in the 1970s which failed due to public protest. As the lake shore is clearly not natural it is hard to see why more drowned trees a bit further up the hill would be substantially different. I am a bit surprised that there are so many trees still sticking out of the water after almost 100 years.

We paddled about an hour down the lake, until we came to a spit of relatively flat land sticking out into the water where it was possible to land. Even so, the ground was boggy and covered in reeds, but we found a log to sit on and ate our lunch.

I saw one large fish (probably a trout) swim by, and several fritters worth of of whitebait paraded up and down in front of us tantalizingly while we ate. They must have been able to see that we didn’t have a net.

The lake was pretty cold, and a guy launching his boat at the ramp told us that it was a lot warmer, and not so high when he visited only a couple of weeks ago. I suspect that the rain we avoided by heading over to the Catlins was much heavier in this part of the country.

We had considered camping there, but the site was hidden in the bush and our solar panels would have been in shade, so we decided to head to Manapouri in the hope that the weather will allow another trip tomorrow.