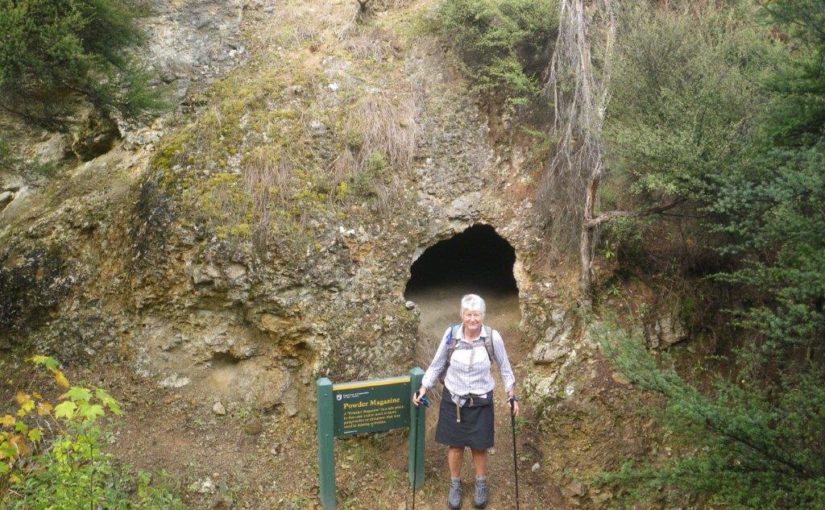 Directly inland from Dunedin is the town of Lawrence, just outside of which is an area known as Gabriels Gully. Nowadays it is a DOC reserve in a pretty tree-lined valley, but its claim to fame is that in 1861 a bloke named Gabriel Read discovered gold there, and the Otago gold rush began.

Between then and the 1930s the landscape was totally transformed. Whole hillsides were dug up, and the valley floor is now 50 meters higher because of all the tailings. Thousands of miners lived in tents, which can’t of been fun in the cold winters.

A hundred years ago the area was a denuded wasteland, but now the hillsides are covered with trees, just beginning to show their autumn colours. We parked beside a pretty lake, and went for a short walk up the closed Otago Dam Track before dinner, harvesting ripe blackberries on the way.

After breakfast we hiked the longer “Interpretation Walk” around the edge of the mining area. There were lots of informative signs which described the successive mining operations, which became more sophisticated as time went on and the more easily found gold was removed.

There is an impressive network of water-races which tapped into nearly every river in a 50 km radius to provide water for sluicing the rock. By the time the gold-rush was over this network totaled nearly 900 km – most of it dug by hand with picks and shovels.

I could imagine spending weeks exploring this area of the country, but our plan was to go kayaking so we hit the road again late morning, stopping just beyond Gore for lunch on the banks of the Mataura River.