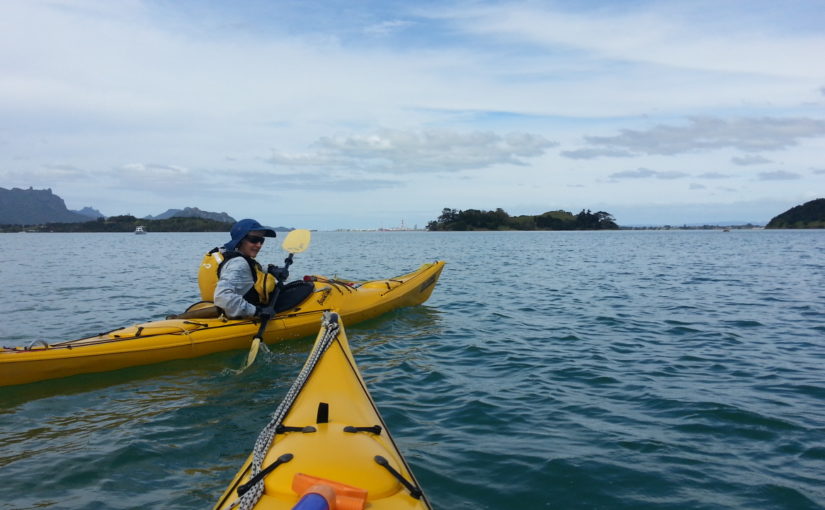 As Felicity had to attend a powhiri in Whangarei this weekend, we loaded the kayaks onto the motorhome and headed north on Friday morning. As we planned to stay the night at her cousin’s house up on Mt Tiger, we stopped at nearby Parua Bay for an afternoon paddle.

Not far off-shore is Motukiore, or Rat Island so we headed out there and landed to explore. There was obviously once a Maori settlement on the high point of the island, because there is still extensive terracing and defensive trenches. In later times there must have been a European farmhouse at the other end, judging by the camellias, bamboo and other exotic plants. The island is now owned by DOC and still used for grazing, but there were no animals to be seen during our visit.

We paddled over to the other side of the bay and explored the coastline of “The Nook” which lies between two peninsulas. Felicity’s phone rang, and for the second time in two weeks her boss caught her out on the water instead of at her desk. Since most of her Sunday was about to used up attending the event which took us to Whangarei, there were no complaints.

All too soon it was time to head back to the motorhome and pack our gear away. We drove up the hill and parked on a flat spot in our hosts’ driveway. There was an ethnic food festival on in town, so the four of us drove in their car and joined what seemed like most of the town’s population down at the Town Basin.

We split up to queue at different stalls, after hiring plastic plates for $2.00 to avoid using disposables. I cleverly chose one of the most popular but understaffed stall making an Eastern Mediterranean pancake stuffed with spinach, cheese and minced lamb. When I finally got to the front and placed my order, I received a ticket with a number that clearly wasn’t going to be reached for some considerable time. One of the other guys waiting suggested that we might be able to sell our ticket to someone at the back of the queue for 200% mark-up, but the food looked pretty good.

While I was waiting I joined the others on a rug and ate half a plate of the Filipino dish that Felicity had scored. When our pancakes were finally ready we discovered that they were delicious, so well worth the wait. When we returned our hired plates, we received a $1 refund. Considering they then needed to be washed, it seems unlikely this is a profit-making venture. Nice not to make unnecessary rubbish though.

On Saturday morning we went to visit our friend David who lives further out along Whangarei Heads Road. We stayed for lunch, watching small squalls of rain approaching across the harbour from the oil refinery at Marsden Point. The rain didn’t seem to be persisting and there was not much wind, so we decided on another afternoon paddle. David suggested we launch at Taurikura Bay and explore down the coast past High Island to Little Munroe Bay.

This turned out to be excellent advice, because this section coastline is stunningly beautiful. We have walked along some of the coastal tracks in the past, but the views from out on the water are amazing. Just as we were about to depart, the clouds thickened and it began to rain a bit more heavily. We were committed by this time, so we just put on our jackets and set off. It didn’t come to much though, so most of the trip was dry.

As we were about to turn back, we stopped to chat to DOC ranger in a little inflatable boat, who told us that the area is a Marine Reserve, and that there is good snorkelling. I think his job was to ensure all the many fishermen stayed just outside the reserve boundaries. There were huge schools of fish inside the reserve, and an enormous flock of seagulls resting on the water nearby.

The reason there are no photos of Felicity on this trip is that I went to get my camera out of its dry-bag and discovered that it wasn’t around my neck as I expected. I remembered taking it out of the van and putting it on the grass with my other gear, so I had to hope it would still be there when we got back. My anxiety spoiled the return trip somewhat, but it was till enjoyable. The phone wasn’t where I had left it, but it was there on the grass near the vehicle. Either I must have picked it up and dropped it or a passer by had taken a look and decided to be honest.

Not far from Taurikura is the Mt Manaia Club next to the car park at the end of the summit track. Vehicles are allowed to park overnight here so we found a nice spot next to the bush and settled in for the evening. We considered a walk to the top in the morning but Felicity was worried we wouldn’t get back and into town for her midday event. I didn’t mind because I was planning on going for a run while I was waiting for her.

I left the motorhome parked at the Toll Stadium and set off into town and up the riverside walkway. From my calculations on Google Maps it seems I only covered about 15 km but it felt more like 20 km. Perhaps that was because my route included a 240 metre climb to the top of Mt Parihaka. I managed to run about 90% of the way up, but I confess to walking the final few hundred meters. The bush along the Hatea River is very beautiful, and the walkway is made well enough that you don’t have to be watching your feet the whole time, so it was very enjoyable. After nearly 2½ hours running I was feeling rather knackered, so it was a relief to get back to the motorhome and a late lunch.

Felicity re-joined me at about 3.30 and we set off for home, which took almost exactly two hours. Thank goodness there wasn’t much traffic, despite the fact it is school holidays.