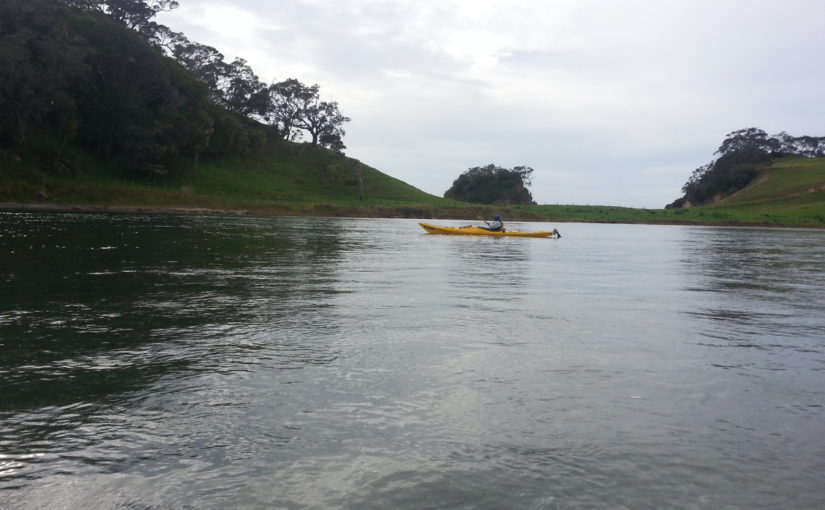 In between Pataua and Ngunguru is a river called the Horahora, on the NZ topographical map anyway. On Google Maps it is confusingly named Waitangi, despite the fact that there is much better known river with the same name in the Bay of Islands a bit further north.

We were determined to get away for the 3-day Labour weekend, but Felicity had to be in her office on Friday so we didn’t hit the road until about 9.30 on Saturday morning. We headed for Pataua North, where we intended to stay the night and kayak in the estuary.

There were a number of spots where we would probably have got away with parking overnight, but they were all very close to houses and not at all appealing. The tide was rushing out so it was clear we would have to delay our paddle until the next morning.

We ate lunch by the boat ramp then went for a walk – first across the bridge to Pataua South and around the coast to the south, then back to the north side and around the sand spit on to the ocean beach. We stopped for a while and watched a bunch of fishermen tying traces and hooks on to a line which was connected to a kite out beyond the surf. I was hoping to see how they were planning to get the line down into the water, because the string of baited hooks in the air looked more likely to catch seagulls than fish. Eventually we grew bored and continued back to the motorhome, so I’ll never know if they had a clever trick up their sleeves or if they just hadn’t thought it through properly.

On our way down the Pataua North road we had passed a boat ramp on the side of the road leading to an inviting looking river that neither of us had really known was there. We drove back and found that there was an excellent spot to park with nice water views and an ideal launching place for our kayaks. Even though we were right beside the road it was very peaceful, and I doubt if more than half a dozen vehicles passed us during the night.

We started our paddle by heading down to the river mouth, where we looked out over the bar into Ngunguru Bay. Way out on the horizon to the north I could just see The Poor Knights. Around the edge of the estuary were dozens of shag colonies in huge pohutukawa trees overhanging the water. Some of the nests had quite large chicks waiting for their parents to return from fishing.

We turned around and headed upstream, this time with the tide to help us. I think we travelled about 10 km before we ran out of water deep enough to paddle in. Some of the upper reaches were through native bush, with large kauri growing right on the river bank, and millions of pink pururi flowers floating down on the current.

By the time we got back to the motorhome we had been on the go for about three hours, so it was nice to stretch our legs. After lunch, we drove back towards Whangarei, with the idea of spending the night near Naghwa Hot Springs. On the outskirts of town we spotted the A H Reed Memorial Park with an interesting looking track heading into a grove of Kauri, so we stopped and put our boots on.

I must have driven past this park hundreds of times over the years, but never got around to exploring it. We were surprised to find a flash treetop canopy walkway spanning the Wai Koromiko Stream far below. We continued up a longer track to the Paranui Falls where there are a couple of viewing platforms at the edge of the drop.

When we returned and followed the track down to the main carpark on Whareora Rd, we decided to continue along the Hatea River Walkway to the much larger Whangarei Falls. There were dozens of other people enjoying the beautiful walkway, and even more when we arrived at the falls where there is direct access from the road.

By the time we got back to the van and set off again, it was late afternoon, so the idea of driving for another 90 mins or so wasn’t as appealing as it had been earlier. As we passed through Hikurangi Felicity reminded me that we had never spent a night at Lake Waro Limestone Scenic Reserve, so our plan changed and we were soon parked on the edge of the lake drinking our evening coffee.

Because I was hot and sweaty after our walk, I was determined to plunge in the lake for a wash, but there were families around the edge of the water until nearly 7.00 and I didn’t want to get my togs wet for what I expected would be a very brief dip. Felicity had dinner almost ready when everyone finally left, and I was able to strip naked and and leap in for my wash. It was actually not as cold as I expected, but I didn’t linger as long as I might later in the summer.

I was somewhat concerned we might be disturbed by hoons, but it seems the gate must have been locked at dusk as advertised because there were no vehicles driving around during the night. We were woken by some loud screams in the distance that sounded like “heeeelp”, but I recognised the sound of peacocks and immediately went back to sleep.

This morning there was rain forecast, but it was still pretty dry after breakfast so we put on our raincoats and hiked around the lake. The limestone formations are quite spectacular and what was once an old coal mine is now a fantastic example of how an extractive industry can leave the landscape better than before.

By mid morning the rain arrived, and after a bit of reading we decided we might as well head home. Ms Google advised us that it would be about 15 minutes quicker to turn off State Highway 1 at Te Hana and drive south via SH 16 and Kaukapakapa, so we took her advice and missed most of the heavy traffic. The fishing club next to the bridge across the Hoteo River made a pleasant spot to stop for lunch on the way.