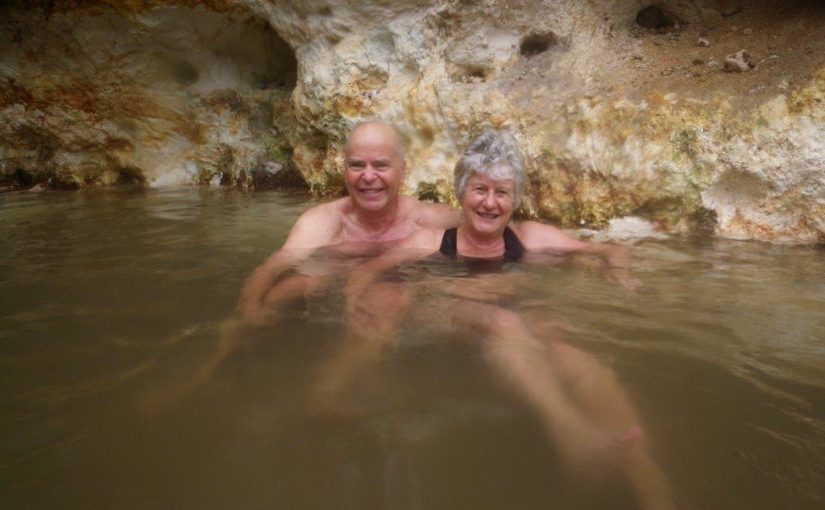 Despite the fact that heavy rain was forecast for Saturday night we decided to spend the weekend kayaking, and the Rotorua area seemed the obvious choice. We left home on Friday morning, and made it as far as Karapiro by lunchtime.

We found a nice spot on the edge of the lake right next to the orange floating barrier preventing people getting too close to the hydro station. There is even a ramp where we could have launched the kayaks if we hadn’t been keen to get further south. Even though I have driven down the main highway close by I have never driven over the curved dam.

As soon as we arrived at Dunham Reserve we unpacked and paddled out into the Waikato. It was quite pleasant in the shelter of the bank, but when we ventured out into the middle of the river to check out some small islands we realised that the weather was pretty shit, so we stopped and put our rain coats on so that we would stay warm.

There were a couple of times when the sun came out, and I briefly even regretted not bringing my sunglasses when the light reflecting off the water hit me directly in the eyes. This is a very pretty part of the river, with lots of rocks and small islands to paddle around.

Just next door to us was MiCamp Whakamaru, which is a large youth camp at the end of a causeway on what is nearly an island. We paddled almost right around it, and were impressed by the huge range of adventurous activities on offer.

Our camp spot for the night was quite idyllic, situated right on the bank of the river. We left the back window shade open because every now and then the clouds would part and we could see the nearly full moon reflecting on the water.

On Saturday we drove on to Rotorua and out on the Tarawera Road to Blue lake. Because the water level is very high, the council has temporarily banned water-skiing, which made kayaking much more enjoyable. We did see one rather strange amphibious craft full of tourists, but they only spent about 10 minutes on the lake before racing off to the next spot.

At the moment there is lots of clematis flowering, and there were vivid white displays standing out against the green bush everywhere. There were also a few golden kowhai for variety. The straight line of reeds behind Felicity in the photo “Blue Lakes 3” are a series of rafts which are supposedly for birds to nest in safe from predators. We have seen similar rafts in Lake Rotorua. I couldn’t see any evidence they are being used.

After lunch we drove out to the end of Tarawera road and found another interesting spot to kayak which we will have to come back to. Unfortunately there is no vehicle camping on this part of Lake Tarawera, but there are three spots you can get to by boat so we might have to come back with tents some day.

Our plan had been to stay at the Waikite Valley thermal pools, but while we were exploring some of the back-roads around Waimangu we discovered The Secret Spot hot springs. Felicity was taken here at night about 30 years ago, and we have searched for it unsuccessfully several times since. A normally boiling hot creek runs under the road bridge and into a cold river, and at the intersection there is a natural bathing pool.

As there has been a lot of rain recently the hot creek was quite pleasant to soak in, and we spent a happy hour turning into prunes. It is not actually very secret, because there were a couple of dozen others there.

On the way we had passed a council campsite on the edge of Lake Okaro, so we changed our plan and parked up there for the night. There was a notice warning that some kind of “interactive horror” event was taking place and that there was likely to be people screaming in cars and running about until midnight, but we are hoping the rain will come and dampen the festivities.

One thought on “Dunham Reserve and Blue Lake”