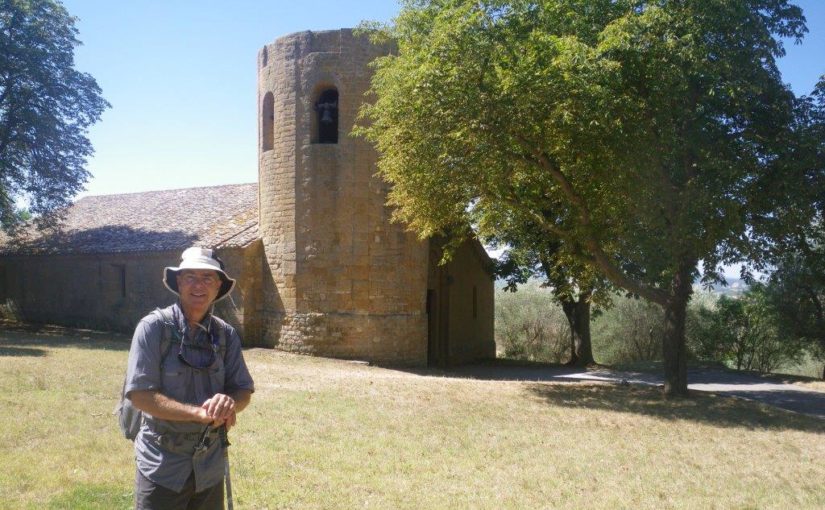 The town we have walked to today used to be named Corsignano, but in 1405 a bloke named Enea Silvio Bartolomeo Piccolomini was born. 53 years later he was elected Pope Pius II, and decided to embark on a programme of urban renewal in his hometown, which from then on was called Pienza – the town of Pius.

The route from San Quirco was a bit shorter than previous days, which is just as well because it was hotter than ever, and most of the way has been out in the open along farm tracks. The first place of interest involved a 600 meter detour to see the Cappella di Vitaleta. This chapel became famous because it once housed a statue of the Madonna sculpted in 1590 by the artist Andrea della Robbia. In 1870 the statue was moved into town to make it more accessible to tourists, but the small church is still reputedly the most photographed in Tuscany.

Our road led downhill to a dry creek bed, then up the other side of the valley. We stopped to explore an abandoned farmhouse which would make an excellent restoration project for someone with vast amounts of funding available. The building looked pretty dodgy and I suspect it would be cheaper to bulldoze it and start from scratch. I looked down the well, but it was bone dry, which is probably why the previous owners left.

In a nearby field was an interesting cypress tree which Felicity thought reminded her of something. On closer inspection we could see a carved stone underneath, probably from a Roman or Etruscan temple. It was a bit too heavy to carry home as a souvineer.

Further up the hill we noticed a farmer pumping water into a tank behind his tractor from a spring in the hillside. When he left we looked in and saw lots of brown frogs jump into the water. A green and black striped lizard was a bit slow to get away, and tried to hide in a bunch of leaves on the stone path.

On the outskirts of Pienza we found the Pieve di Corsignano, a church that has been there since the early 8th century. We went inside and down into the crypt below the alter, which is the oldest part of the building. Outside above the entrance door is a recycled Etruscan statue that has nothing to do with Christianity but adds to the attractiveness of the building.

Because it was just before midday when we arrived at our hotel our room was not ready, so we sat on the terrace and used the wifi to catch up on news from home. After we were able to dump our gear we walked back into the old town and found a small cafe to sit and eat lunch. As far as I could see we were the only customers not drinking wine. I’m sure if I had I would have ended up sleeping most of the afternoon.

Pius II is famous for writing the only autobiography by a reigning pope. Before his election he traveled extensively throughout Europe on church business, managing to father several children in the process. On a trip to Scotland the sea was so rough that he vowed to walk barefoot to the nearest shrine of Our Lady if they landed safely. The ship docked at Dunbar which meant he had to walk 10 miles through the snow and ice to Whitekirk, leaving him with permanent pain in his legs.

His urban renewal project was never completed because he became ill and died. Pius hired a famous architect named Rossellino and succeeded in finishing the central piazza, the town hall, the Piccolommini family mansion and the duomo (cathedral). The last building was built in such a rush that the foundations were not constructed properly, and the apse surrounding the alter began to subside almost immediately. There have been several attempts at restoration since then, but the building is probably on borrowed time.

In the late afternoon we looked inside, and immediately noticed the way the floor slopes alarmingly as you near the alter. We could also see wide cracks running across the floor and up the walls. There are metal sensors at regular intervals along the crack which presumably set off an alarm if the crack suddenly gets wider. Apparently Rossellino’s brief was to make the piazza as big as possible, so not only did he cleverly orientate the buildings on the left and right at a slight angle to add space either side of the duomo, but he also extended the cathedral out over the rocky cliff to leave the maximum space in front.

After admiring the ornate inside, we went down into the crypt underneath and paid a couple of euros each to look around. There were a few stones from the derelict church which previously existed on the site, but the highlight was a labyrinth even further down that wound its way through brick tunnels which form part of repairs done in the 19th and early 20th century. It was great fun exploring, but I wished I had not seen all the cracks in the huge stone edifice above our heads. Afterwards we walked around the back and looked at the foundations from the outside.

Our ticket allowed us entrance to the town museum, which holds heaps of fantastic religious artworks from the 13th century onwards. There were paintings, tapestries, statues and metal objects used for various ceremonial purposes. Of particular interest was a metal bust of Saint Andrew rescued from the evil Turks, and a huge cape made for the pope in England with 27 stories from the life of the Virgin, Saint Margherita of Antioch and Saint Catherine of Alexandria.

We then sat in a cafe and drank an expresso. Over the last week we have noticed lots of people drinking glasses of an orange liquid, so Felicity asked some Australians at the next table and discovered it is called an Aperol Spritz, made of prosecco wine, Aperol liqueur and soda water. It is apparently the most popular aperitif in Northeast Italy, so we ordered a glass each and discovered it is indeed delicious and refreshing.

A few minutes later I noticed four female Chinese tourists at the next table looking over and asking the waiter what the cool westerners were drinking. A few minutes later they were uploading photos of themselves drinking Aperol Spritz to renren.com or whatever FaceBook clone they are allowed to access.

A little more wandering up and down small alleys used up the time before 7.00pm which is when decent restaurants usually open. At the end of an enjoyable meal when we declined desert, the waitress bought as a bottle of digestive called Liqueur d’herbe, which is presumably distilled from batches of wine that didn’t turn out right then flavoured with herbs to disguise the taste. I wouldn’t want to pay for it, but I’m sure it has helped my digestion considerably.

One thought on “San Quirico – Pienza”