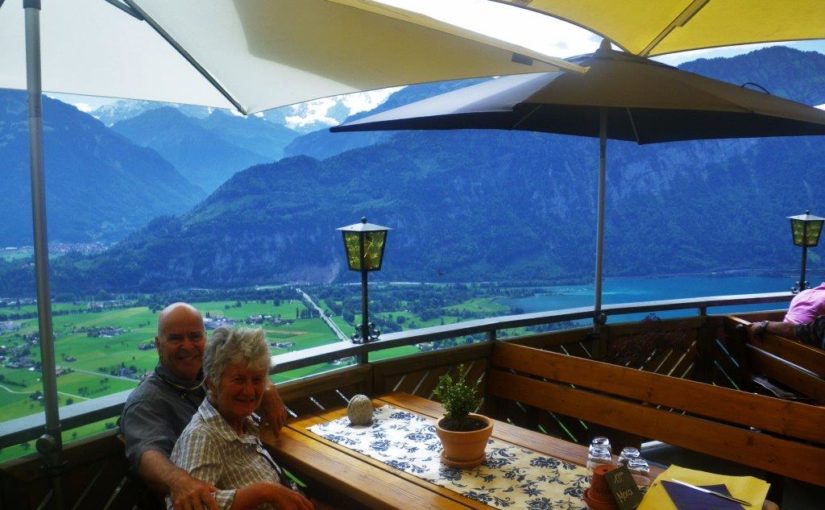 We spent today doing a tiki-tour of one of the more touristed areas of Switzerland. Interlaken is a town between Lake Thun and Lake Brienz in the Bernese Oberland region of central Switzerland, and is surrounded by high mountains. The Aare River river connects the two lakes and flows through the center of town, making it an important crossing point.

When we arrived we drove high up one of the mountains to the village of Beatenberg where we stopped at a cafe with a balcony overlooking the valley far below. Across the valley we could see the famous alpine peaks of Eiger, Mönch, and Jungfrau. Eiger means “old man” and Jungfrau means “virgin”, so the “monk” stands between them to stop any funny business.

One of the popular tourist activities is para-gliding, both tandem and single, so a steady stream of people were leaping from the top of the hill above us and flying past on their way down to landing spots far below.

There was a monastery in Interlaken by 1133, which controlled the river crossing by collecting tax. In 1348 the local people rose up against the church, but were defeated by troops sent from Berne. There were ongoing troubles until the monastery was secularised in 1528, after which it was used as an administrative centre for the district.

We drove back down and explored the old part of the town. Most of the buildings are made of wood, in the traditional Swiss chalet style, although there are also some bigger stone buildings in the center of town. We bought some lunch at a local supermarket and sat eating it on the edge of Hoematte Park watching the paragilders land.

We then drove to Berne, which is the federal capital of Switzerland, and the fourth biggest city. The old area of the city is situated within a huge loop of the Aare River, and we had heard it is possible to jump in on one side of the city and get swept downriver around the loop. We were astonished to discover that there were thousands of other people doing the same thing. Not too surprising seeing that the air temperature was about 32 degrees, and the water about 20 degrees.

We left Jochem with our clothes, and walked for about 20 minutes up river along the bank. The path was smooth tar seal, so it wasn’t too bad on my bare feet, but the sections in the sun were very hot and I got slightly singed. We jumped in at a beach and spent a thrilling ten minutes zooming back to where we started. It was a very cool experience. Swimming in a mountain river was another activity that we hadn’t expected to be enjoying here. In the video below, you’ll see me waving at about 15 seconds in.

In the evening we took our hosts out to dinner at a small restaurant in a village about ten minutes drive south of where we are staying. We secured a great table on a terrace overlooking the lake. No true Swiss would eat fondue in the middle of summer, but we were determined to try it and the chef was happy to oblige. He actually served us enough for four people, so we now feeling rather full.

2 thoughts on “Interlaken and Berne”