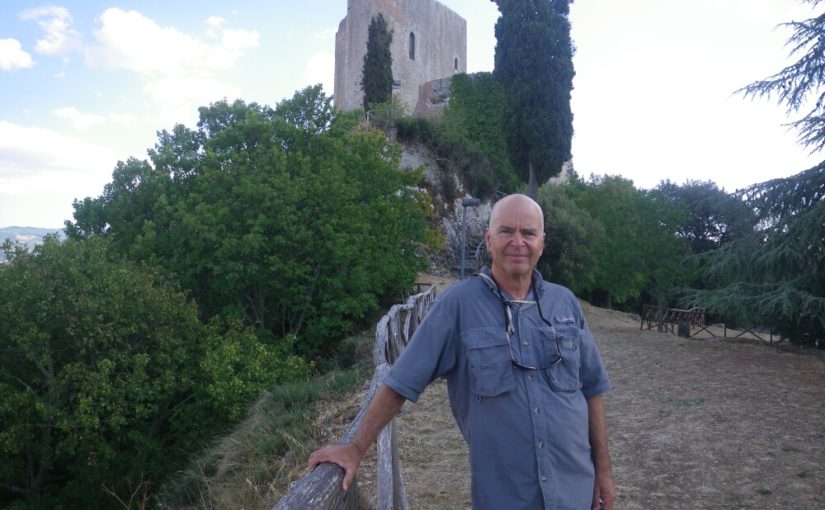 The 27 inhabitants of this medieval borgo (hamlet) reckon it is the oldest in Italy. It is definitely one of the best preserved in Tuscany. Towering above it is the rocca, which is a fortified tower. For over a thousand years it repelled numerous military assaults, but by the middle of the 20th century it was threatening to collapse onto the town.

In 1975 the Italian bureau of cultural heritage decided to repair the fort instead of simply evicting the inhabitants of the borgo. The restored sections are in red brick while the original parts are made of stone.

Our guide picked us up in Montacino and drove us to the start of the walk in Castelnuovo dell’Abate. He offered to take us a further kilometer down the highway to the point where the route goes down a dirt track, and we thought this sounded like a good plan.

The first section of the walk wound steadily down hill past vineyards and olive groves. When we reached the Fiume (River) Orcia we walked along the river flats for a while then climbed up onto a railway to cross on the rail bridge. There are only a few trains each week on this line, and the bridge is wide enough for one to pass if we did happen to be on the bridge at the same time.

After some more paddocks we started climbing up the hill on the other side of the valley. Fortunately we were in the forest, so we had quite a bit of shade. There was one point where I checked the GPS and found we had strayed about half a kilometer off the marked route, but we soon navigated ourselves back onto the correct path.

A bit after midday I checked the GPS again and saw that we were only a couple of hundred meters from the river, and that there was an old track down to a marked ford. Because Tuscany is experiencing a serious drought, there was not much water flowing, but we found a pool big enough to make it worth stripping off our clothes and cooling off.

Our immediate surroundings were quite remote, so we weren’t too worried about being naked, but towering over us at the top of the cliff opposite was the Castello di Ripa d’Orica, and we kept a wary eye on it in case a bus load of tourists arrived equipped with long lens cameras!

The route continued through the shady forest parallel to the river. We saw a couple more deer bounding away when we disturbed them. The final few kilometers up the hill was mostly in the sun, so it was pretty tough going. As we entered Rocca d’Orcia we passed a house named “Katherine Domus” where the patron saint of Italy, Catherine of Sienna, once stayed when she was recuperating from an illness.

We knocked on the door of one of the two hotels in the town, and our hostess appeared with her hands covered in flour from making fresh pasta for tonight’s dinner – a good sign. It took a beer, a bottle of sparkling water, a shower and an hour or so relaxing to recover, then we set off to check out the fort and find coffee.

When we climbed up to the top of the tower we could see why the hill was so easy to defend. Enemies would have been seen miles away, and before the days of artillery the defenders shooting down would have had an enormous advantage.

On the other side of the rocca is the slightly bigger town of Castiglione d’Orcia. A barman served us an espresso, then a small iced coffee from a machine that we will be keeping an eye out for from now on.

The old part of this town has not changed much in the last thousand years – one piazza centered around a well has paving which has not been touched since the 12th century. We wandered up and down the winding lanes and alleys until a church bell rung very enthusiastically reminded us that it was 6.00 pm and time to head back.