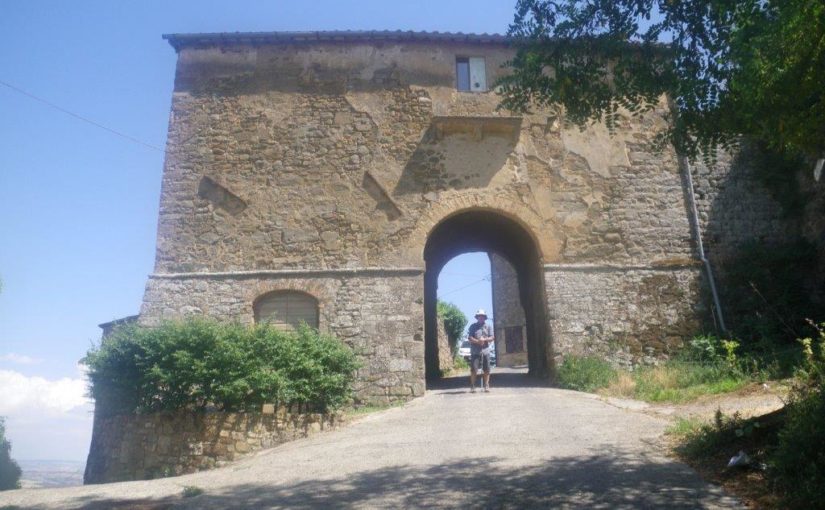 Because our accommodation had been on the outskirts of town, we made a detour past fields of sunflowers to explore Buonconvento before starting our walk this morning. It is only a small town, but its location on the main road between Sienna and Rome which the Romans named Via Cassia, means that it has been around for a while.

The crusaders used it as a stopping place on their way to the holy land between the 11th and 13th centuries, and Henry VII the Holy Roman Emperor got ill and died here in 1313 while fighting against Sienna. During the middle ages, the main pilgrimage route between France and Rome called the Via Francigena passed through the middle of town. Shops, inns and hospitals (which was what the called hotels in those days) sprang up to cater to the tourists.

Most of the town walls are still intact, and we walked down to the main north gate through the narrow central street. Down in among the stone buildings it was pleasantly cool, but this was not to last long. We stopped at an alimentari for some lunch supplies, which included some local pecorino cheese and thinly sliced prosciutto.

Most of our walk today followed the Via Francigena towards the south. Almost as soon as we left the sealed road on a metaled farm track we were distracted by some delicious oval plums. There were quite a lot on the ground in the sun, and they tasted just like prunes.

The day got hotter and hotter, and we could understand why we have not seen any other walkers. Just after midday we reached the famous Carparzo winery. We certainly didn’t intend to drink a bottle with lunch, but we pretended we might buy one and tasted a white chardonnay/sauvignon/gewurztraminer blend that I thought was a bit average, and a red Brunello di Montalcino Sangiovese which is the specialty of this area. It is supposed to be one of the best red wines in the world, and while it is not bad, I think I still prefer a nice NZ Pinot Noir. The winery has a shaded “pilgrims break” spot which we took advantage of to eat our picnic and recover from the wine tasting.

After another couple of kilometers walking past rows of grape vines, we saw a town up on the top of a hill in the distance, and realised that was where we were heading. The last kilometer or so trudging 300 meters (in height) up a steep hill in the afternoon sun was a serious mission, and we were relieved to find our hotel was just inside the Porta Burelli gate.

There was some good news though – the hotel has a swimming pool, so we spent just long enough in our room to strip off our sweaty clothes and swill a couple of beers from the mini bar. The pool has an amazing view out over the golden Tuscan countryside that we had just been walking through.

About five o’clock we decided to head out and look for coffee. It was still pretty hot, but at least the winding streets through this medieval town provide some shade. People have lived here since Paleolithic times, and both the Etruscans and the Romans had a presence. Its position on the top of a hill makes it easy to defend, but there have been four sieges, in 1199, 1252, 1526 and 1553.

Now we are off to find a restaurant that serves “typical Tuscan food”, and no doubt try some more Brunello di Montalcino wine.

4 thoughts on “Buonconvento to Montalcino”