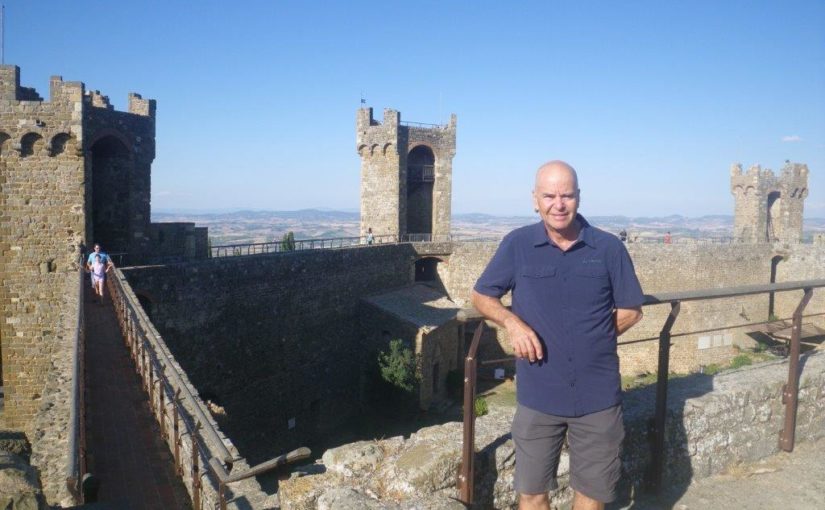 Today our walk took us to Abbazia di Sant’Antimo, about 10 km from Montalcino. Much of the walk was through forest so the heat was not too unpleasant.

Last night we ate some terrific Tuscan food in a small restaurant called Osteria Porta Al Cassero. I ordered a delicious bowl of chickpea soup (because they are grown locally), and we shared a wild boar stew and some roasted rabbit. The waiter commented on how thoroughly I dispatched the rabbit: “You cleaned the bones”.

I have decided to raise my assessment of Brunello wine from “not bad” to “excellent”. Like single malt whiskey, it gets dramatically more expensive as it gets older. There were numerous bottles on the menu priced at $250 or more (which we didn’t consider!). A 1985 vintage that cost $20 then could be worth over $10,000 now apparently.

Breakfast this morning started at 7.30 am outside on the terrace near the pool, so we were packed and ready to hit the road by 8.30. We enjoyed the cooler temperature for the first hour or so, especially through the town where the sun hadn’t emerged from behind the buildings. The first couple of kilometers were on small roads, but soon we turned off onto a track through the forest. Even deep in the trees, we passed sections of stone embankment indicating that it may have been an ancient road in the past.

On one section where we were briefly following a highway we came across an unusual piece of road kill. I thought porcupines came from North America, but clearly there are some wandering around the Italian countryside. It was about the size of a medium dog, and judging by the trail of broken pieces of plastic, the car did not come of unscathed. As cars were swerving around it rather dangerously, I found a large stick and pushed it off the road.

In a couple of places in the forest, we startled medium sized deer which bounded away gracefully before Felicity could get the camera out of her pocket. We also saw dozens of lizards scurrying away into the undergrowth. There is a noticeable lack of bird life – none of the grape vines have nets over them. I suspect that generations of farmers with shotguns have reduced the population significantly.

We made a slight detour to visit the Villa a Tolli. In Italian, the word villa technically means a large country house, but this place seems to use it in the sense of village, or hamlet. There were almost a dozen homes, a small church, and a bunch of farm buildings. Next to the old village well we inspected a communal baking oven.

After another few kilometers down a steep 4WD road we arrived at the abbey. Sant’Antimo is reputed to have been founded by the emperor Charlemagne in 781. When his troops caught the plague and began dying, he had a dream that he should gather a particular herb and mix it with wine. The miracle worked, his soldiers recovered, and to give thanks Charlemagne founded an abbey.

There is some speculation that this story may have been invented by a marketing consultant to cash in on the medieval pilgrim trade, but I’m sure monks wouldn’t tell porkies. You can still buy herbal cures and potions in the gift shop, but Felicity wasn’t keen because (a) we don’t have the plague and (b) she has funny superstitions about only using something called “evidence-based medicine”.

Since we had over an hour before we needed to head up to the nearby town of Castelnuovo dell’Abate where we had to catch a bus home, we paid for the deluxe audio tour which got us into some of the locked areas of the church. By 1118 the Abbey had become very wealthy, and it embarked on a huge expansion program. Unfortunately they were a bit too ambitious, and funds ran out before the building was completed. Their extensive wealth made them a few enemies though, and in 1463 Pope Pius II suppressed the abbey and gave the wealth to his local bishops who promptly squandered it.

Over the following years the buildings became derelict, and the roof caved in. Many of the monastery’s buildings were dismantled and the stone was taken to use in other projects. In 1870 the abbey became the property of the state, and it was restored to its present condition. In 1993 a small group of French Cistercian monks formed a community and began running religious services there after 530 years of disuse.

There are a few odd, non-christian features about the church – a horn of cornucopia embedded in the outside wall for instance which may have come from a old Roman building. One of the interior pillars depicts a centaur with small horns sticking out of it’s head. It may just been that the stone carver was bored and decided to do his own thing. The audio guide tried to rationalise how these motifs had a symbolic meaning for Christians, but it wasn’t particularly convincing.

Our walking tour guide suggested that we eat our lunch in the shade of a centuries-old olive tree outside the abbey, but we thought it prudent to be nearer to the bus stop so we walked a kilometer up the hill to the town and found some shade at the back of a car park under a tree that was probably only a few decades old. By mid afternoon we were back at our hotel and relaxing in the pool.

When it cooled off in the evening we walked to the other end of town to inspect the fort. During most of the middle ages Montalcino was independent, and quite wealthy due to leather production, but in 1260 it was taken over by Sienna. In 1555 Siena was defeated by the Medici family of Florence, and four years later Montalcino was also conquered. The fortress was built in 1361 on highest point of the town, and despite all the warfare around it never submitted in spite of numerous sieges. Above each gate we looked down through chutes where boiling oil and the like could be poured on soldiers trying to break down the doors.

The entrance to the fort tower is in a wine shop that must have stocked hundreds of thousands of euros worth of wine. Many of the individual bottles were over $1,000. We had intended to return to the same restaurant as last night to try some other items on the menu, but sadly Wednesday is their night off. The pizzeria we ate at instead was adequate, but nothing to get excited about.

2 thoughts on “Abbey of Sant’ Antimo”