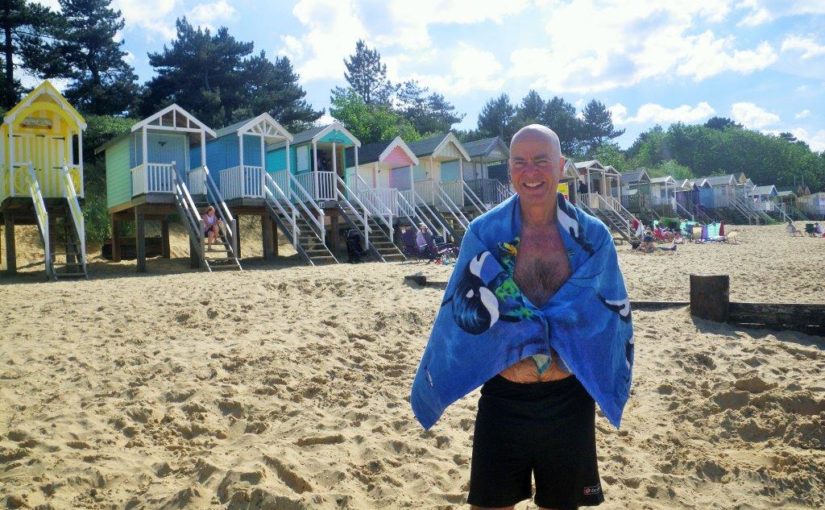 This weekend the woman Felicity is working with in Norwich invited us to stay the night with her and her husband at their cottage on the northern coast of Norfolk. We decided to catch the train to Sheringham and walk to Wells along the Norfolk Coast Path.


It was drizzling slightly when we started walking through the seaside town of Sheringham, so we stopped to put on our matching purple ponchos. “I can tell you two are together” commented a golfer as we walked along the edge of the clifftop course he was playing on. I couldn’t help laughing when I went over to read a sign in the centre of a patch of gorse which said “Gorse protection – please keep off”. Perhaps you are supposed to abandon your ball if it lands there?

Just as we were leaving town, a steam train that runs along the Poppy Line to Holt caught our attention, and provided a couple of great photos. On our mainline train from Norwich there were two young men sitting opposite us who spent the entire trip talking about trains, so I guess they were passengers.

This area is famous for crabs, and all along the coast we could see buoys marking crab pots every few hundred meters. Off shore on the horizon we could see a huge wind farm, which began generating in 2011. It produces enough electricity to power over 220,000 British homes.

The first couple of hours was very pleasant, but after Weybourne we ended up down on the beach walking in loose shingle, which was quite hard work and soon became tedious. By the time we reached Cley-next-the-Sea we had both had enough and headed inland.

There is a huge nature reserve at Cley Marshes where we encountered dozens of twitchers with large bird-watching telescopes. We sat in one of the many hides to eat our lunch out of the wind. The area has been owned by the Norfolk Wildlife trust since 1926 and is one of the oldest reserves in the country. Apparently the previous landowner liked nothing better than to sit in a boat in the centre of the marsh and shoot as many species as were foolish to come within range of his shotgun.

Following the inland path to Cley village was much more interesting, so we continued along the road to Blakeney before catching a bus the rest of the way to Wells.

The weather had improved significantly by this time, so our hostess suggested we walk down to the beach for a swim. We were amused to see a long row of brightly coloured beach huts, few of which seemed to be in use despite quite a few people enjoying the seaside. Felicity and I both enjoyed our swim in the North Sea, which while not exactly warm was a significantly higher temperature than the Southern Ocean where we swam back in April.

We were able to spend the entire evening outdoors in a pretty courtyard having a BBQ dinner. As night fell, we saw a couple of dark shapes flitting about that we were told were pipistrelle bats. The cottage turned out to be an old bakery, parts of which were built around 1740. It was rather strange walking up a noticeably sloping floor to the door of our bedroom.

After breakfast we went for a walk around the edge of the town. Our first stop was an allotment where our host Barry has a very productive garden. Like most of Norfolk, the soil is very fertile, and they are able to harvest a big range of vegetables, berries and other fruit. Barry has been busy building a large cage to keep birds and animals (including humans) from stealing ripe fruit.

Our walk continued through the Holkham Estate. Holkham was built by Thomas Coke, the 1st Earl of Leicester between 1734 and 1764, and is still owned by the same family. As we walked down an impressive entrance driveway lined with Holm Oaks his Lordship passed us in his car. The trees are of Mediterranean origin, and arrived in Britain because the acorns were once used to pack fragile items exported from Europe.

The extensive grounds were designed by the famous landscape architect Capability Brown. He would never have seen the results of his work due to the slow growth of the big trees carefully arranged across the landscape. We passed a herd of fallow deer, and were told that there are also herds of red deer in the park.

After seeing so many deer on our recent walks we have purchased some venison for tonight’s dinner, but when I examined the label closely I discovered it came from New Zealand!