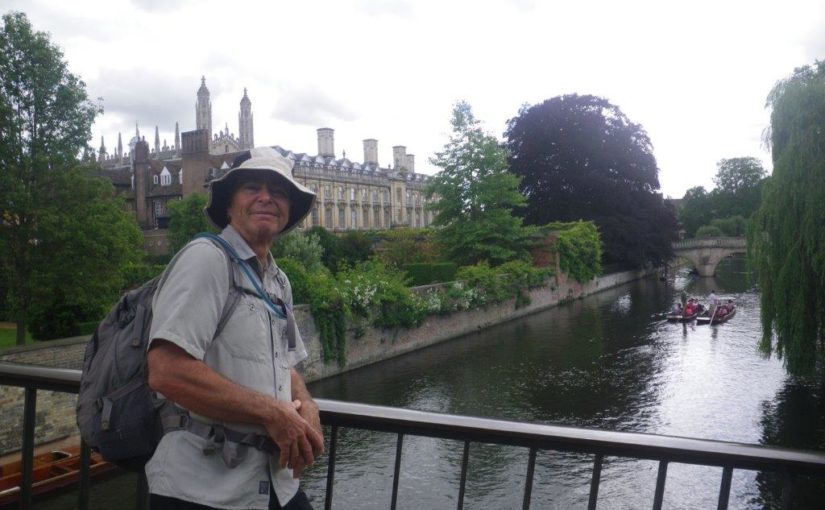 Felicity went to visit a professor at Cambridge University today, so we went for a long walk through the interesting city afterwards. Unlike Norwich, the central part of town is swarming with tourists, and there are students from all over the world making it a much more cosmopolitan place.


Murray Edwards was founded in 1954 as the third women-only college at Cambridge, so it is very young by the standards of this ancient university. It is housed in buildings erected in the early 1960s, which are so architecturally impressive they have grade II listing. In 2008 the college recieved £30 million from Dr Ros Edwards and her husband Steve, the largest personal donation Cambridge has ever recieved.

While Felicity was having her meeting, I had a look at the largest collection of modern and contemporary art by women artists in Europe. I thought a couple of pieces were interesting, particularly a full size wooden horse called “Dobbin”.

We were invited to stay for lunch and ate at the “high table”, which at this college is only slightly raised above where the students sit. I was interested to learn that the fees don’t cover the expenses and that they need to raise about £2,000 extra per student.

Our first stop after lunch was Castle Hill, which is now just a large green mound. As Cambridge was the highest navigable point of the Cam river has always been a strategic location. The Romans built a fort and a town called Duroliponte, and the hill was a defensive position for the Anglo-Saxons. After the Norman conquest a castle was built, but all the stone has since been removed and used in other buildings.

Trinity is the largest and most wealthy of all the colleges. It was founded in 1546 by Henry VIII, and is now the fourth biggest landowner in the UK, after the Crown, the Church of England and the National Trust. We didn’t pay the £10 it costs to go inside, but contented ourselves with looking in through the gates. The gentlemen in the bowler hats are porters/security guards.

I briefly contemplated hiring a punt, but noticed that there was quite a difference between the professionals and the tourists in steering ability. You obviously have to begin turning quite a way in advance to avoid collisions. They give passengers in the tourist-piloted punts a small paddle to make last minute emergency adjustments, but with the number of observers armed with cameras the potential for a disaster to go viral was a bit high for my comfort. It is also very expensive.

From Jesus Green to the north of the city centre we walked along the bank of the River Cam. This took us past Stourbridge Common, the site of Europe’s largest annual fair by 1589, although the first was held in 1211. This was the inspiration for John Bunyan’s “Vanity Fair” in his book Pilgrim’s Progress.

When we left the river we had a couple of kilometers of suburbia to walk through before we came to Cambridge North railway station, where we discovered that not every train to Norwich stops, necessitating a 45 minute wait before our trip home.