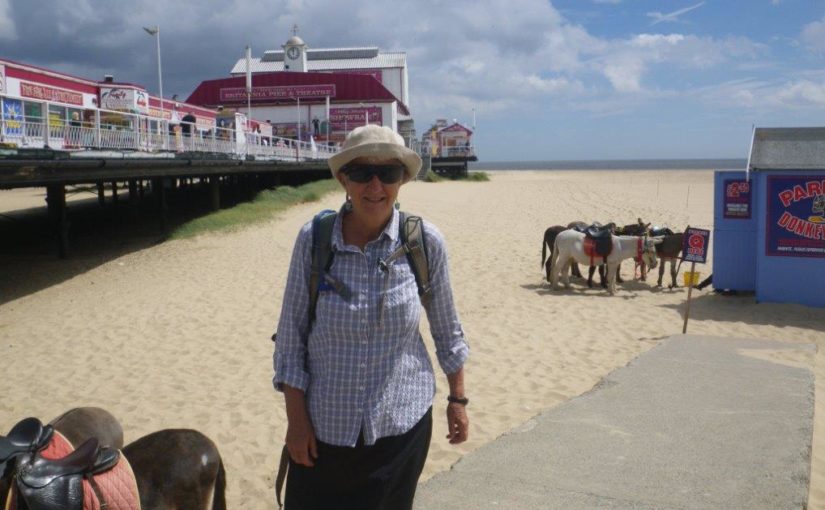 Although we have already visited Yarmouth on two occasions, we hadn’t explored the town or seen the beach, so we caught the train out to the coast this morning to see this famous “resort”. Sadly, we discovered that it’s heyday was about a century ago, and that the town seems to have gone steadily downhill since then.


There once were three railway stations, but the two closest to the sea were closed in the mid 1960s. At that time the “Beeching Axe” decommissioned 2,363 stations and 8,000 km of railway line throughout Britain in an attempt to stem financial losses.

We walked into town past hundreds of small bed and breakfast establishments, most of which seemed to have been built in the mid 20th century. Yarmouth was heavily bombed in WW2, and shelled by German warships in WW1.

We walked past what may have been the remains of a city wall, but there were no signs to enlighten us. As we approached the beach it looked more like we were heading for an amusement park. All along the coast were fun-fair rides, carnival stalls and souvineer shops.

Out on Britannia Pier is a huge entertainment venue that seemed to be advertising every British comedian I have ever heard of. It looks like ships could once tie up at the end, at high tide anyway, but it is now derelict and fenced off for safety reasons. We admired the wind farm just off the coast, and walked past all the stalls without spending anything. I think it would be a very expensive place if you had children.

We continued south along the Marine Parade, past the donkey rides, the mini golf and the deck chair hire. There was an interesting glass and steel building called the Winter Gardens but it had a fence around it waiting for renovation one day.

One of the most interesting things we saw were a series of posters showing the history of the resort. Some of the photos showed the beach packed with thousands of people. In the 1930s there was a scandal when a young woman was seen wearing shorts! There have also been many serious floods, which doesn’t bode well if sea levels rise.

There are hundreds of places that sell “famous fish and chips”, which was what most people seemed to be eating. We were probably the only people in town to have bought a packed lunch, which we ate at a table outside a bar on Wellington Pier, hoping that waiters wouldn’t appear and move us on.

The main street along the seafront has some impressive buildings erected at the beginning of the 20th century, but at street level the architecture is now obscured by garish advertising and aluminium panels. We had to cross the road to get the view of Britannia holding her tripod above a casino.

Heading inland past dozens of empty shops and buildings for sale, we soon came to South Quay, where back in the 19th century thousands of fishing boats were based. During each season there was a huge influx of Scottish crew and fish processing workers, and many tons of herring were exported all over the world. Unfortunately they were too efficient, and caught most of them, leading to an almost complete collapse of the fishery.

On our way back to the station we passed some of the row houses where the working classes lived. On the street there would be an impressive building with a narrow alley leading back into what were eventually considered slums. Most have now been demolished, but some of the rows have been preserved. The one in the photo is a shopping street, but many of the stores were empty.