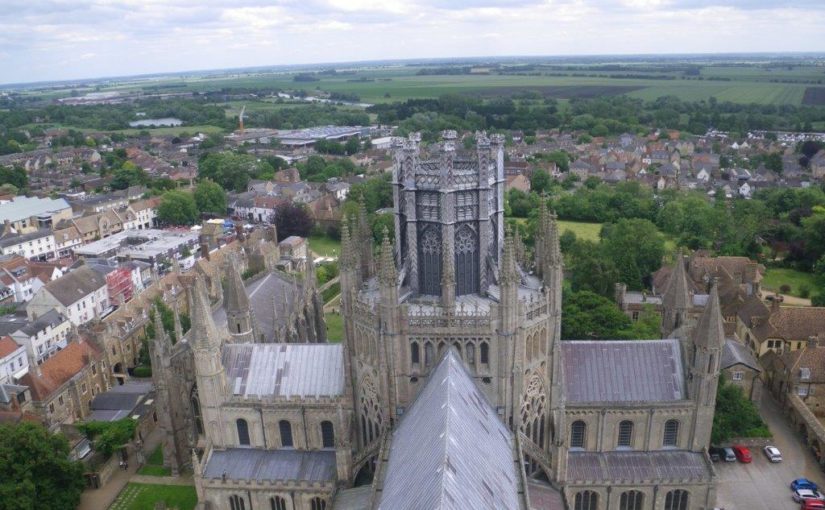 Just under a hundred kilometers to the west of Norwich is the city of Ely, which we have already passed through on the train a few times on our way elsewhere. As it had been recommended to us as one of the best preserved medieval towns in the area we made a visit today.


Until the 17th century, Ely was an island in the Cambridgeshire Fens, a huge area of swamps and waterways pretty much at sea level, which meant that rivers in the district had nowhere to drain. In ancient times when the country was much warmer, this land was covered in trees which became peat when rising sea levels drowned the forest. The name is said to derive from “Isle of Eels”, which were once plentiful.

The Romans made an attempt at digging drains so that the fertile land could be farmed, but it wasn’t until the 1600s when Dutch navvies were imported to dig serious waterways that the area began to become useful as farmland. Unfortunately, as it dries out peat shrinks, and sometimes the land dropped by up to a foot each year, making it necessary to install windmills to pump flood water up to the rivers. In Victorian times these were replaced by huge steam driven pumps, and now electricity keeps the water from returning.

As we walked towards the town from the station, we found ourselves climbing the first hill we had seen since leaving Norwich. At the top through the trees appeared one of the biggest and most impressive cathedrals that I have ever seen.

Way back in 673, a princess named Etheldreda founded an abbey on the island. Although it was destroyed by pesky Viking invaders 200 years later, it was re-built by the Benedictines and by 1086 was the second richest monastery in England. This was partly because it was on the road from London to the port of Kings Lynn in the north, and the monks were able to extract a toll from merchants passing by. It also became an important pilgrimage destination which is always good for the tourist industry.

The first Norman Bishop began building the cathedral in 1083, and originally there was a standard square tower that we’ve seen on most Norman churches. The huge weight of stone erected on a soft clay caused some areas to sink up to half a meter, so when the monks decided to build a large “Lady Chapel” beside the cathedral in 1321 to honor Saint Etheldreda they dug down deep looking for a solid foundation. Unfortunately, this undermined the original building, and less than a year later the square tower collapsed, leaving a gaping hole in the center of the church.

Undeterred by what might have been considered a message from God, the tower was re-built as a huge octagon, unusually made of wood supported by eight massive stone pillars. There is estimated to be almost 200 tons of English oak in the structure, and this is clad in another couple of hundred tons of lead. Ely’s octagon is considered one of the wonders of the medieval world.

The guidebook we were given puts a positive spin on the situation: “it is a picture of how God can take what is broken and restore it from despair to hope, from death to life”. Although it has stayed up there now for over 700 years, I didn’t want to hang around underneath longer than necessary!

We had paid for a tour up the West Tower, which is the highest point of the building, and probably most of Cambridgeshire. It was built in the late 14th century, and required us to climb 288 spiral steps before we came out onto the roof to enjoy the spectacular views. Felicity and I enjoyed the climb, but some of our overweight fellow tourists were looking a bit crook by the time they reached the top.

We looked out over the largest collection of mediaeval buildings still in daily use anywhere in Europe. Things haven’t always been so neat and tidy. When Henry VIII dissolved the monasteries in 1539 and the Benedictines got the heave-ho, that was the end of any serious maintenance to the complex. When Daniel Defoe visited in 1722 it was in such bad shape that he suggested a strong wind might blow it down.

In 1854 Victorian engineers came to the rescue, and spent the next 30 years restoring the cathedral to its previous glory. As we climbed up the tower we could see massive iron rods and reinforcing that now hold the building together. In the 1990s, more engineering work was done, this time using stainless steel, so we didn’t feel too nervous being 66 meters above the ground.

After eating our sandwiches sitting on a wall outside near a vintage car display, we were shown around the other parts of the building by another guide. Some of the places in the choir have small platforms so that elderly monks can take the weight off their feet while still appearing to stand. Underneath are carvings, probably done by apprentices, which are almost invisible unless you disobey the rules and use a flash on your camera like Felicity did. Her picture shows John the Baptist’s head being removed and delivered on a platter to Queen Salome.

Our second stop was at the house where Oliver Cromwell lived with his family when he was an ordinary citizen. He was elected to parliament in 1628, and eventually moved to London. God spoke to him in the 1630s, and told him he was destined for greatness. As a Puritan, he was very critical of attempts by King Charles I to re-introduce rituals associated with Catholicism, and when civil war broke out between parliament and the crown, he joined the army.

He turned out to be one of England’s greatest military geniuses, and played an important role in the defeat of the monarchy, the Scots and the Irish. When democracy proved to be unworkable, he was asked to become King himself, but settled for the role of Lord Protector of England. It seems he did a fairly good job, but died of natural causes after only five years, paving the way for the return of the Royalists a couple of years later. They dug up his body, chopped off his head and displayed it on a post in London.

Several rooms in his house have been restored to something like what they were like in the early 1600’s. The kitchen was pretty interesting – his favourite meal was veal and orange, but he also ate asparagus, carrots (which were purple in those days), fish, oysters, and of course eel stew.

Upstairs I tried on a couple of the armored helmets. They were incredibly heavy – I wouldn’t want to even go to a war in one, much less fight a battle. Cromwell’s soldiers were well equipped, with flints for starting fires, wooden trenchers for holding stew (with another small compartment for salt), and leather tankards for drinking beer (because the water was liable to kill you).

From there we walked down the high street, past the market which was just about closed, an interesting pub called the Royal Standard, and down to the River Great Ouse. We checked out a large building called The Maltings, which was once a Victorian brewery, but when it caught fire in the 1970s the council were able to purchase it for £100 and it was turned into a theater.

Finally, we followed the Great Ouse past numerous pleasure boats, including a floating hotel, until we reached the train station.