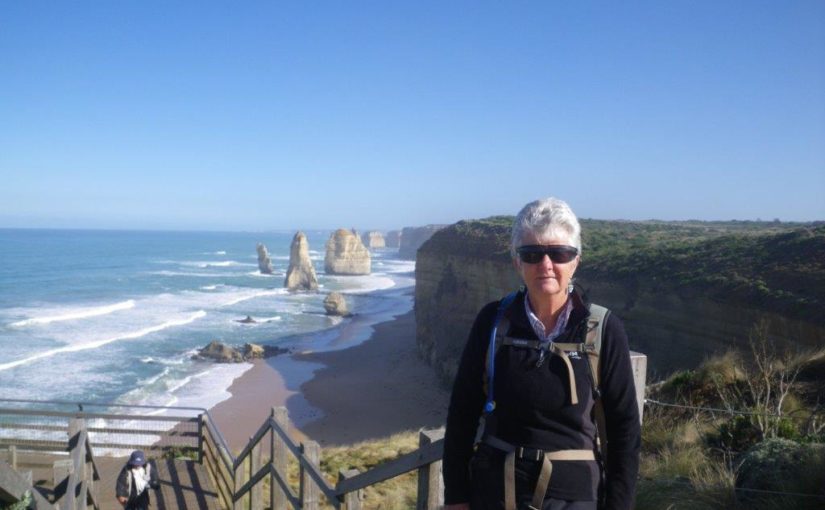 Felicity is presenting at the 15th World Congress on Public Health in Melbourne this week, so we decided I would accompany her and spend some time checking out the city’s cycle trails. Our friends Marion and Elephant invited us to visit them in Allansford near the western border of Victoria for a few days beforehand.


I was expecting a small delay at immigration due to my past criminal conviction, but instead of the ten minute wait I usually experience in Brisbane, the officials in Melbourne decided I should have a “formal interview”, which took two and a half hours! Most of this time was spent sitting waiting in a small institutional room with bare walls and a seat that was bolted to the floor, being watched by a video camera. Fortunately I had a book to read. The three officers I talked to were all polite and courteous, and I suspect they were filling a required quota.

Meanwhile, Felicity had to sit outside waiting, not knowing whether I would be allowed in or sent back to NZ. She was very relieved when I finally walked through the doors.

We took a taxi to our city hotel and flopped straight into bed for a few hour’s sleep. As it was Saturday night in the central city, a bunch of very loud, drunken Australians outside in the street made this a bit difficult, but things quietened down for a few hours before the alarm went off at 6.00 am.

Elephant met us off the train and took us back to their interesting home, from which he and Marion both run small businesses. After our tour and a quick lunch, they took us sightseeing. This part of Australia was one of the first areas settled by European sheep farmers from the British colony in Tasmania.

Our first stop was the Tower Hill Wildlife Reserver, which is Victoria’s first National Park, centered around a large, extinct volcano. As we were driving in we saw three emu wandering about, and while we walked around we spotted four koalas sitting in gum trees. As we drove back past the reserve later in the afternoon we saw dozens of kangaroos in the paddocks near the entrance.

Our next destination was Port Fairy at the mouth of the Moyne River. We walked out to Griffiths Island across a causeway and checked out an old lighthouse. There were lots of seabirds to watch. The island was formed by volcanic lava several hundred thousand years ago. I hadn’t known before now that there were volcanoes in Australia.

The next day Felicity and I set off up the Great Ocean Road to see the interesting coastline. I had seen photos of the Twelve Apostles, and assumed we would stop briefly at a the side of the road to look at them. It turned out that this is a huge tourist attraction, and it was fortunate that we arrived before the busloads of Chinese tourists that come down from Melbourne each day. Many people see this coast from a helicopter, and there were at least three or four in the sky the whole day.

We walked out to the main viewing point, then followed a less used track up the coast to the Gisbon Steps which lead down to the beach below the cliffs. The Southern Ocean is a wild place, and we weren’t tempted to swim in the rough conditions.

Another hour’s drive east is the Otway Fly Treetop Adventures park. We didn’t bother with the expensive zip-line tour, but we were keen to go on the 600 meter treetop walkway, which is 25 meters above the ground through the forest canopy. There is also a tower that goes up 45 meters, and a section of the walkway cantilevered out over a creek. At the top of the tower there was a noticeable sway, but the steel structure seemed well engineered and I didn’t feel nervous.

The Otways are a cool temperate rainforest, situated in one of the highest rainfall areas of the state. The bush is very different to the tropical rainforest we have seen in north Queensland, although it is also quite different to NZ bush apart from the ferns. I was particularly interested to see the myrtle beech, which is an ancient tree from Gondwanaland. Fossilised leaves from this tree have been found in Antarctica.

On our way back down the Great Ocean Road we stopped at numerous other spectacular costal attractions including the Loch Ard Gorge, The Grotto and the London Arch (which used to be London Bridge until part of it fell down). Each of these spots had walkways leading out to viewpoints, so over the day I suspect we walked over 20 km.

Today we all spent the morning working, then headed to nearby Childers Cove for a swim and a picnic. We walked down a steep set of stairs to the bottom of the cliff, past signs warning that swimming is not recommended, that there are strong currents, and that the beach is unpatrolled. I knew the water would be cold, but I was determined to have my first swim in the Southern Ocean. The sea was a lot calmer than the day before, with waves closer to Tasman sized.

Marion plunged straight in, while Felicity and I ran up and down the beach a few times trying to get warmed up. Eventually we went into the water, but couldn’t stay long. I’m pretty sure an iceberg floated past while we were there.

After our lunch, Elephant and I both rode home on two of his racing bikes. I have never been on a road bike with drop bars before, and it took me a while to figure out how get my shoes into the clips and to change gears. The bike was incredibly fast compared to my mountain bike, it took very little effort to get up to 25km/hr on the flat road. Elephant reckons the bike once competed in the Melbourne to Warrnambool road race, and the rider came second. I didn’t enjoy having cars and trucks pass close by on the narrow highway, and I found the riding position rather uncomfortable, but it was a fun thing to do.