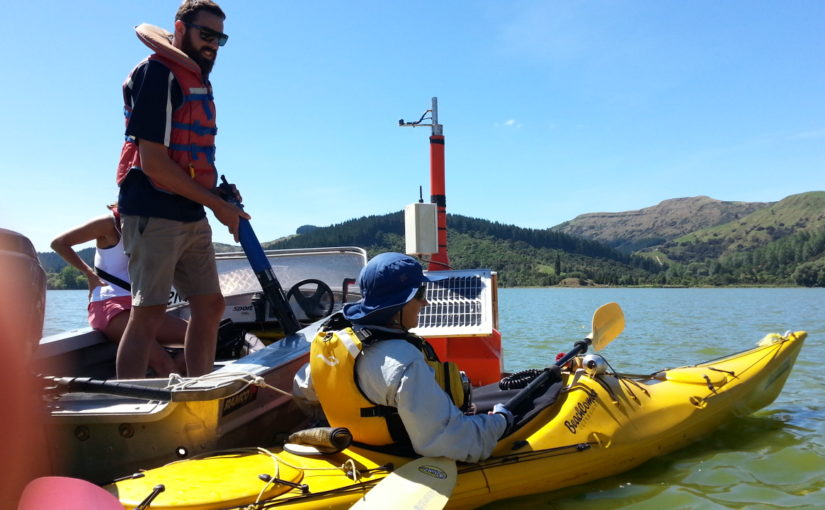 Although we visited Lake Tutira at the end of 2014, we decided to spend another night there and enjoy a paddle. We noticed signs on the way in warning about low water quality, but it wasn’t until we parked in a prime spot on the lake edge that we realised just how bad toxic algae can get in warm, still water.


We launched the kayaks into what looked like thick pea soup. Felicity manage to keep her feet dry, but I had green slime clinging to my ankles like socks. In some areas the water looked like the soup had been sitting around unrefrigerated for several weeks. There were areas with blue, almost fluorescent scum swirling about unpleasantly. There was a slight smell, but not quite bad enough to force us to move our camp further inland.

Lake Tutira was formed about 7,000 years ago when a big landslide at the south end blocked a river. Normally the outflow of water cuts a channel through the rubble and the lake empties, but this river found an alternative route out into the next valley, leaving a permanent 60m deep lake.

In Maori times this was a rich source of food such as fresh water mussels, fish and eels. There were six pa and a number of smaller settlements spread around the shore, but these had been abandoned by the early 19th century when the surrounding area was cleared for a sheep station.

Cyclone Bola in 1988 resulted in much of the soil from the surrounding hills washing down into the lake. In some places the mud was so deep that it came almost to the top of the fence posts.

Many decades of farming has meant that the nitrogen levels in the lake are way higher than nature can deal with, resulting in the algae population exploding. The lake is stocked with trout and carp, but signs warn fishermen not to eat them.

Despite the disgusting water, the lake is very pretty, and we enjoyed our paddle down to the far end of the lake to eat a picnic lunch. There are hundreds of birds to watch, including flocks of wild turkeys roaming through the trees. We paddled past three sheep, who obviously had no instinct for avoiding danger from the water, and let us get within a couple of meters before walking away.

Back near the camping area, we stopped to talk to a couple from the Hawkes Bay Regional Council who were doing some maintenance on a water quality monitoring bouy. This clever piece of kit constantly sends data about water temperature and composition back to headquarters via the cellphone network.

Before we could load the kayaks back on the roof we had to get a bucket of water and detergent to wash of all the green slime, so that it didn’t end up all over the vehicle. As there is no internet in the camping area, we sat in the back of the Navigator reading books for the next hour or so.

In the late afternoon we went for a short walk around the smaller Lake Waikopiro near the camp entrance. I stupidly wore my Crocs instead of my boots, so now I have a small blister on one toe.

Next morning we decided to go for a longer walk along Gailbraith’s Track, which follows around the lake shore then up a valley and over a hill to join the Tutira walkway. There are great maps and signs everywhere, but confusingly the tracks have multiple names.

The final photograph is of me at one of the old pa sites, with the lake and our motorhome in the distance.

One thought on “Toxic Lake Tutira”